Adding 65W Ryzen CPU SKUs, AMD has furthered the availability and reach of it new AM5 platform. 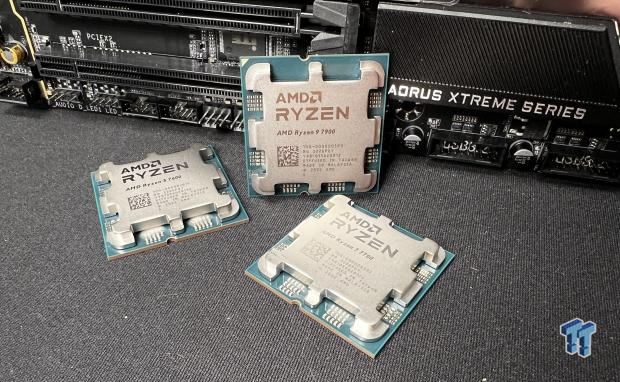 AMD's 65-watt Zen 4 processors open the door to small form factor systems and DIY builders wanting better options that are easier to cool. On the other hand, it also ushers in a second processor stack to fill in pricing gaps in the initial Zen 4 landscape. 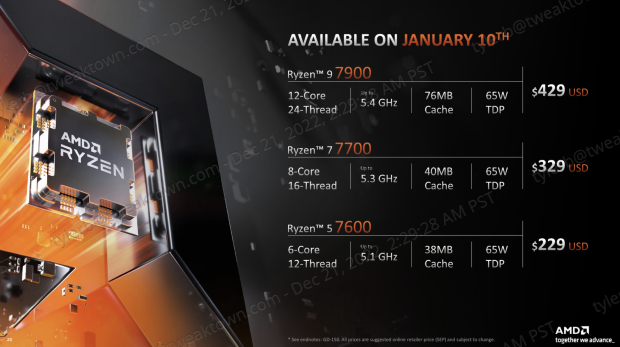 Looking at today's launch models, AMD is starting with the Ryzen 9 7900, a twelve-core twenty-four-thread part. It enjoys a solid 5.4GHz boost and the same 76MB cache as the 7900X. Of course, TDP has been reeled into 65W, and pricing has been adjusted to $429 MSRP. 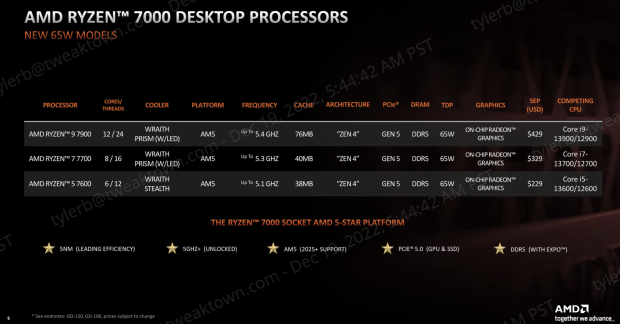 Looking further into the new 65W models, we note each processor's bundled cooling solution in the slide above, followed by compatibility and supporting features. AMD also noted intended competition at the far right. 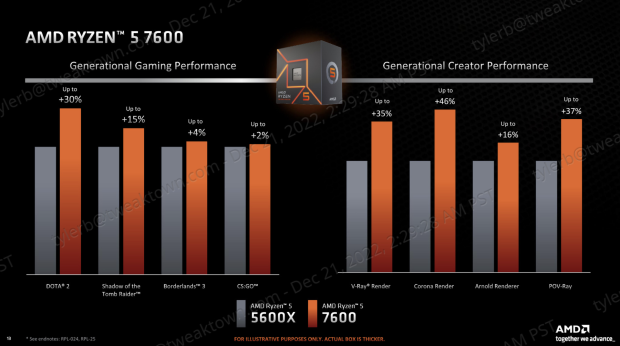 Diving into a few comparison slides, AMD uses its own Zen 3 parts to show the performance of its Zen 4 65W parts. As you may have noted, the 7600, in this instance, outperforms the 5600X in every tested game. 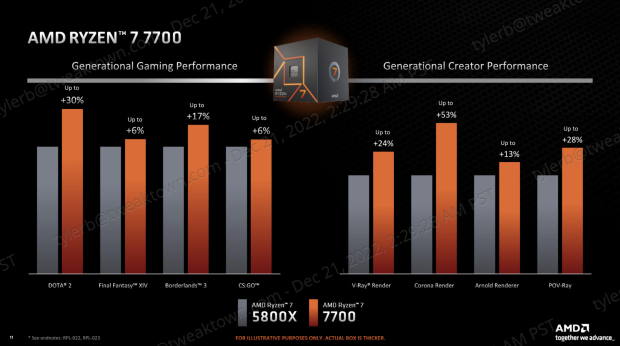 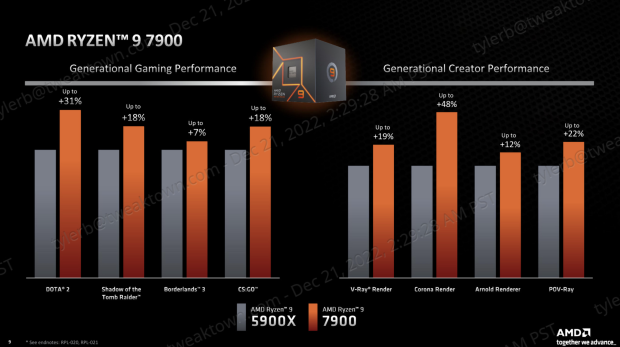 The 7900 does just as good, too. The chart above shows solid boosts in performance gen over gen.

The CPUs themselves follow the design changes we saw with the initial launch of Zen 4. 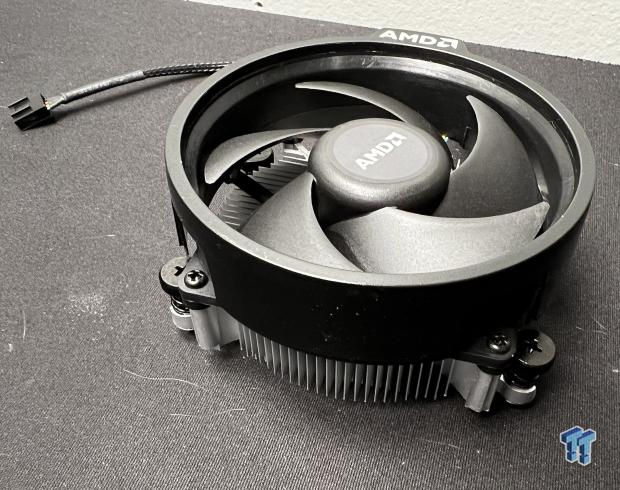 The cooler above is the Wraith Stealth cooler included with the 7600. 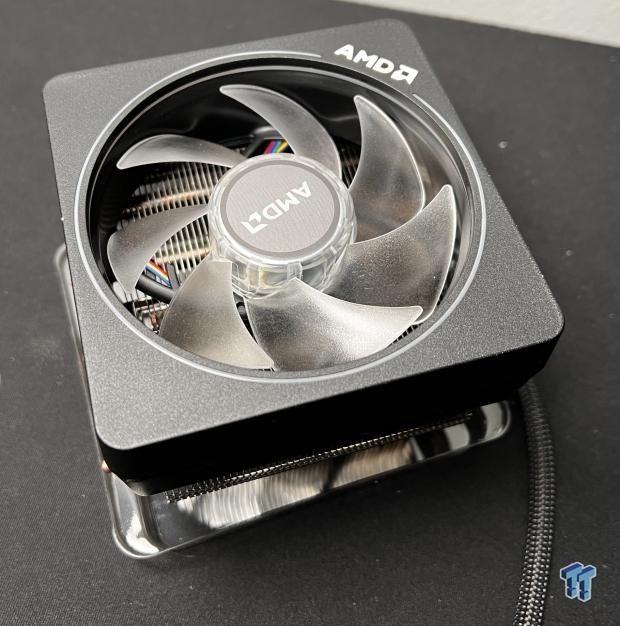 This much larger cooler is the Wraith Spire and is included with the 7700 and 7900.

Cinebench is a long-standing render benchmark that has been heavily relied upon by both Intel and AMD to showcase their newest platforms during unveils. The benchmark has two tests, a single-core workload utilizing one thread or 1T and a multi-threaded test that uses all threads or nT of a tested CPU. 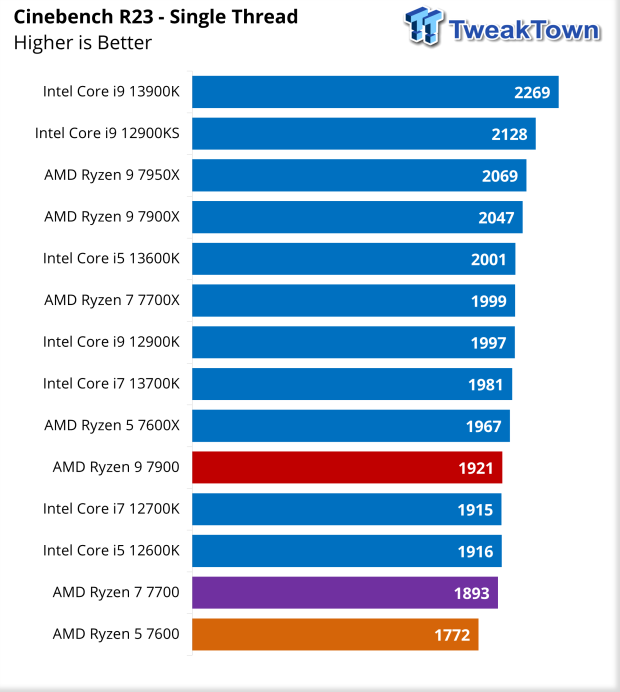 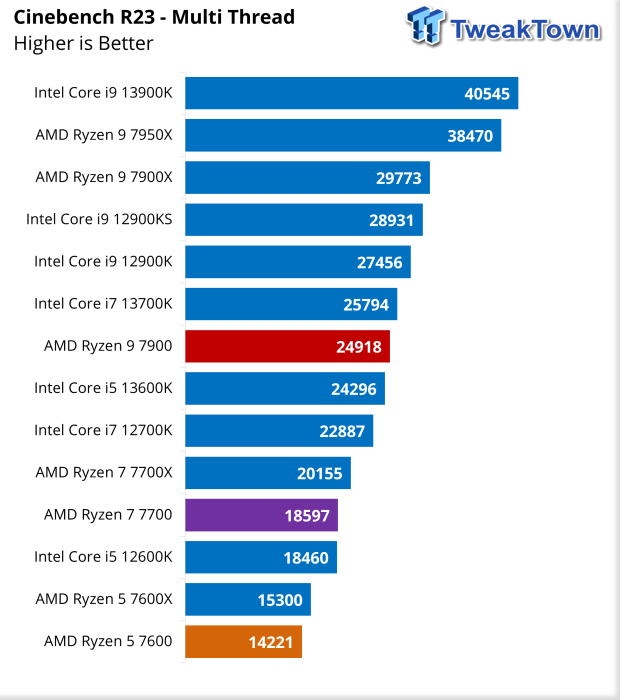 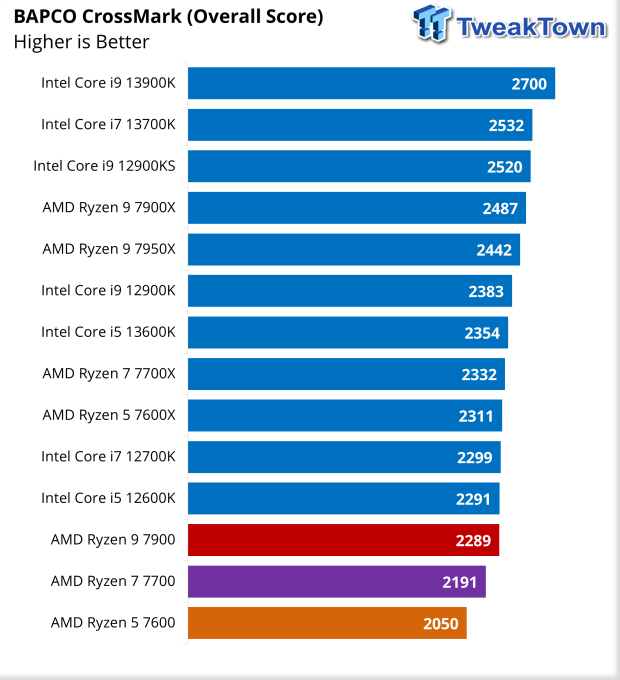 CrossMark lined all three CPUs up at the bottom of our charts. 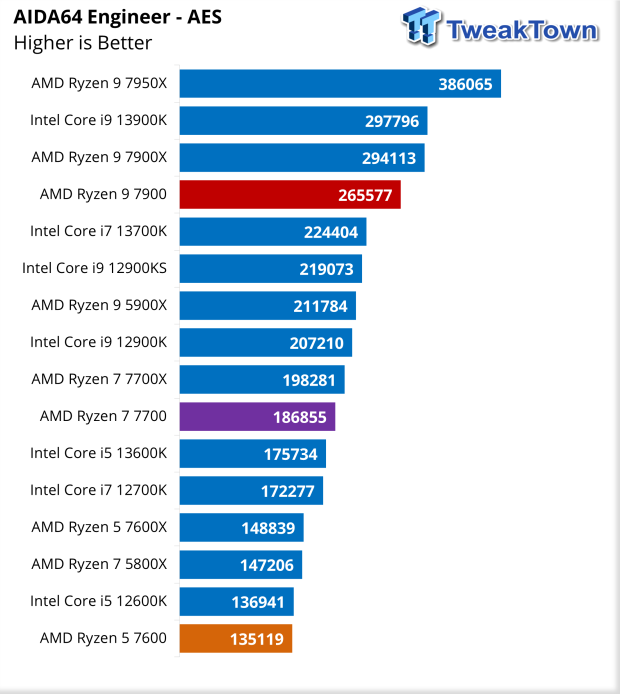 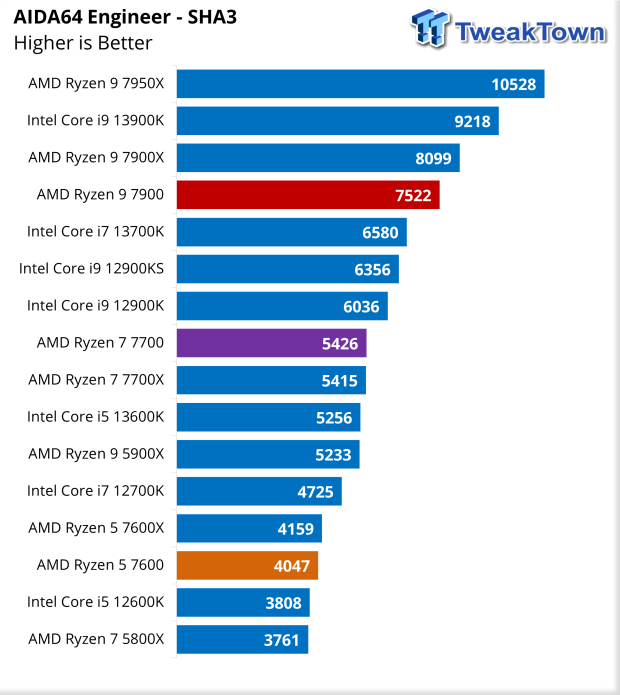 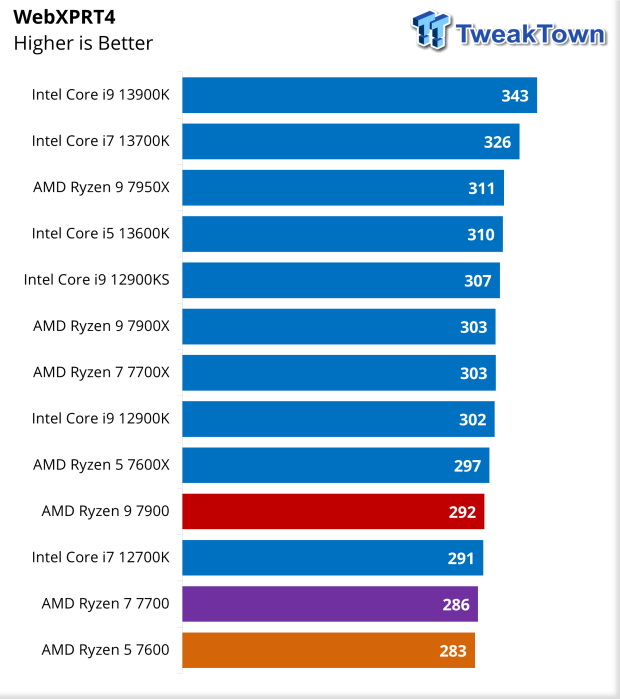 WebXPRT4 showed a small performance loss for the 65W model compared to their X series parts. At the top is the 7900 at 292. 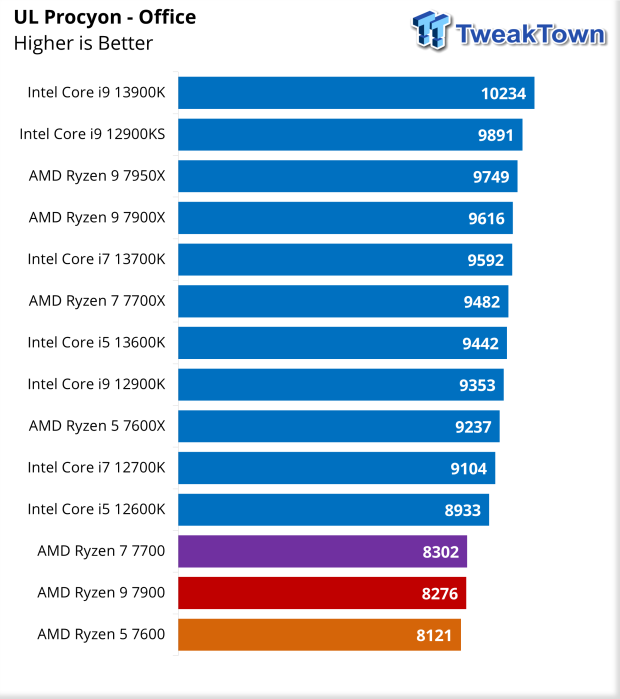 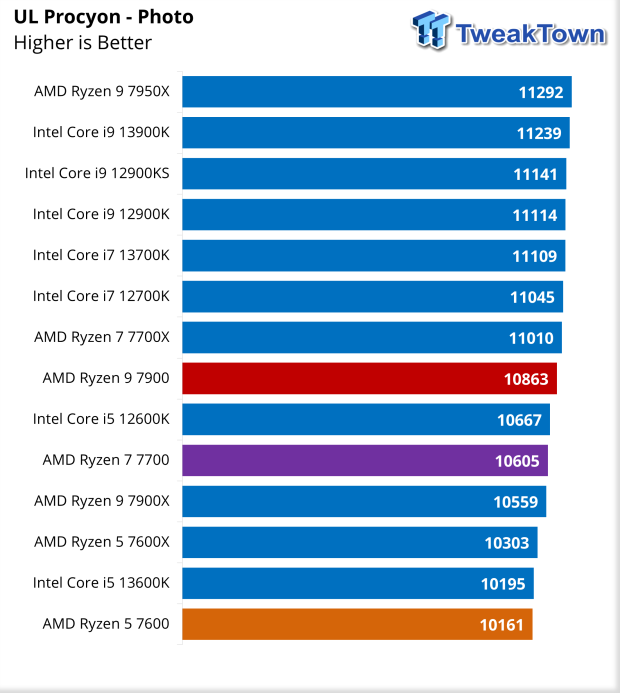 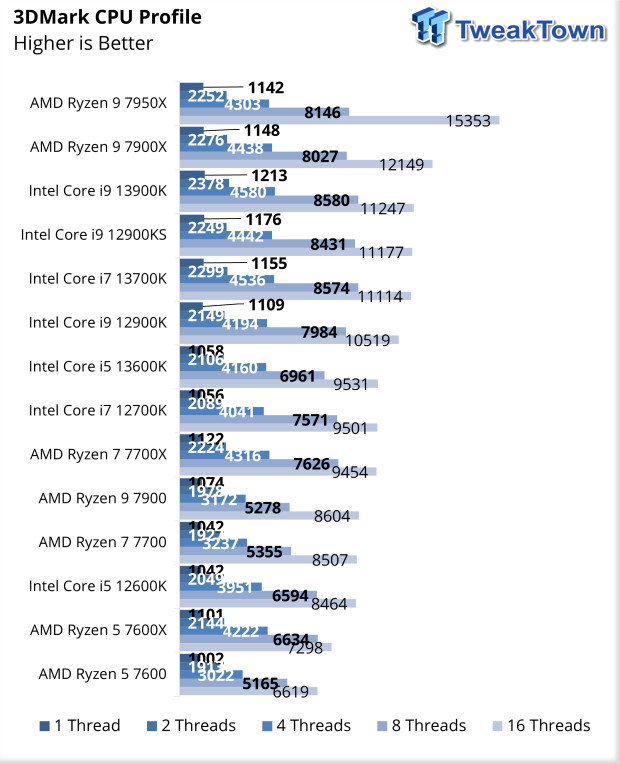 The first of our 3DMark workloads has us in CPU Profile. We noted how well the 65W CPUs did in these workloads against their X counterparts. For instance, the 7700 lands just 900 points behind the 7700X at sixteen threads, and the 7600 is even closer at 6619. 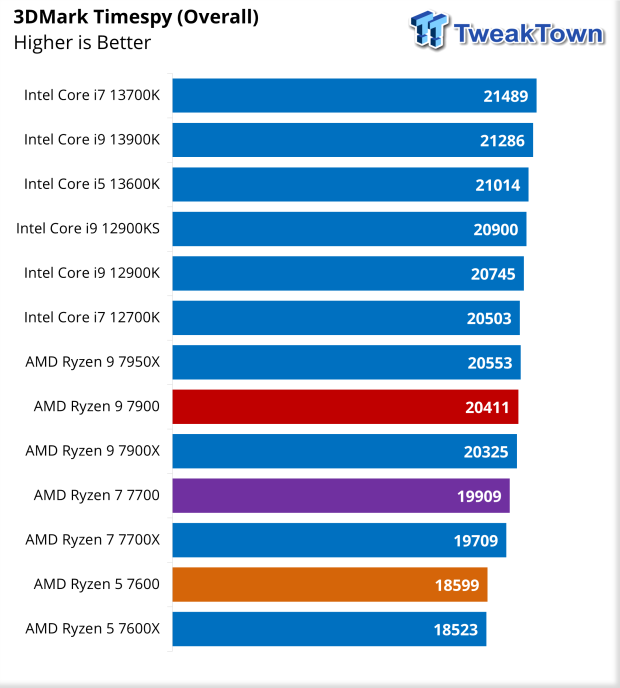 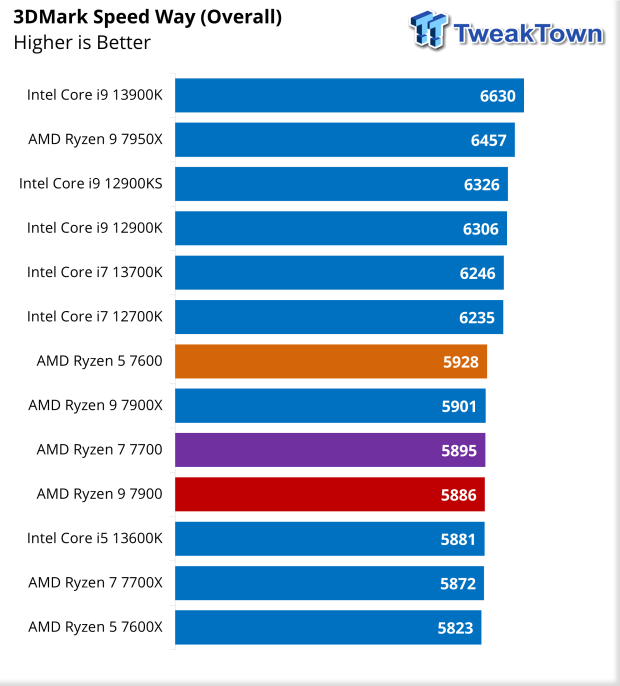 Speed Way is an added benchmark, with the 7600 doing the best in this workload. 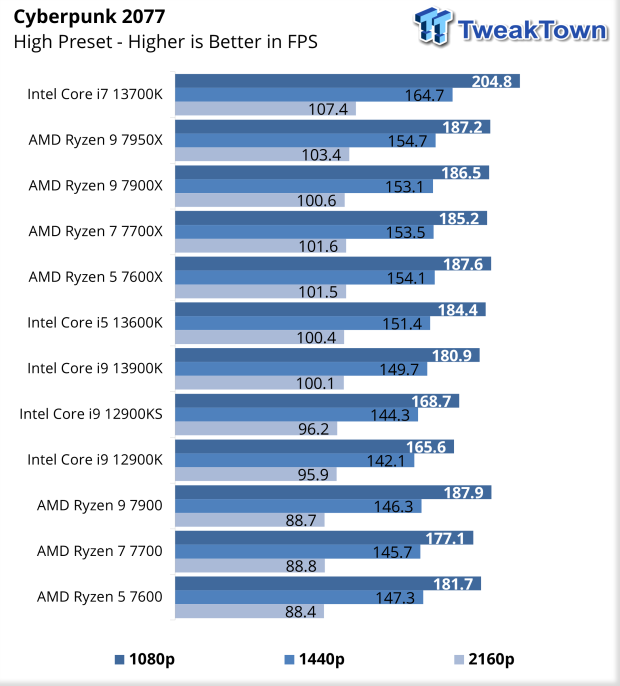 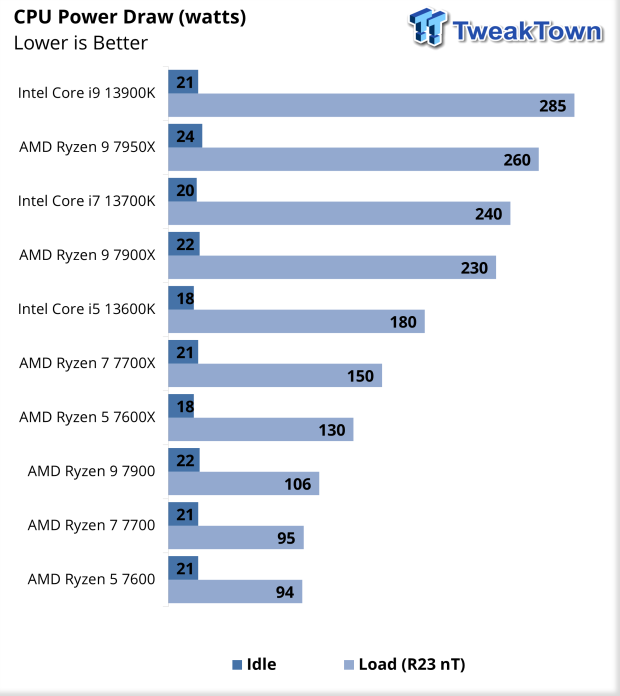 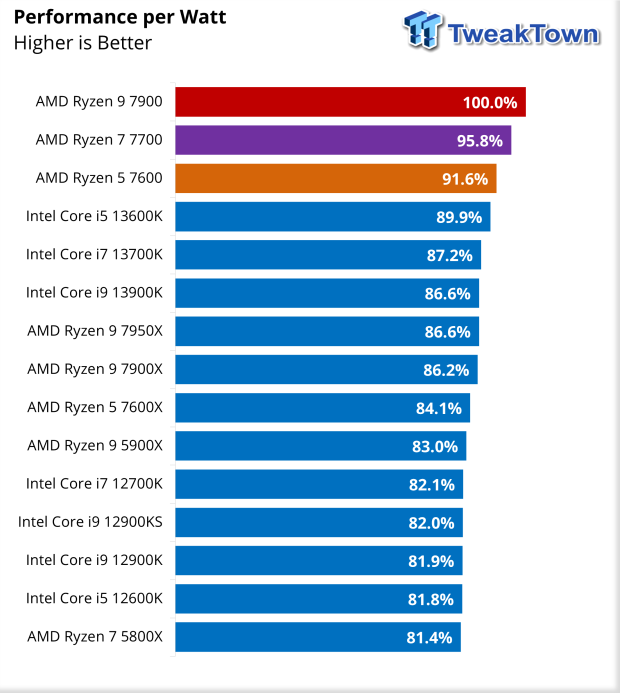 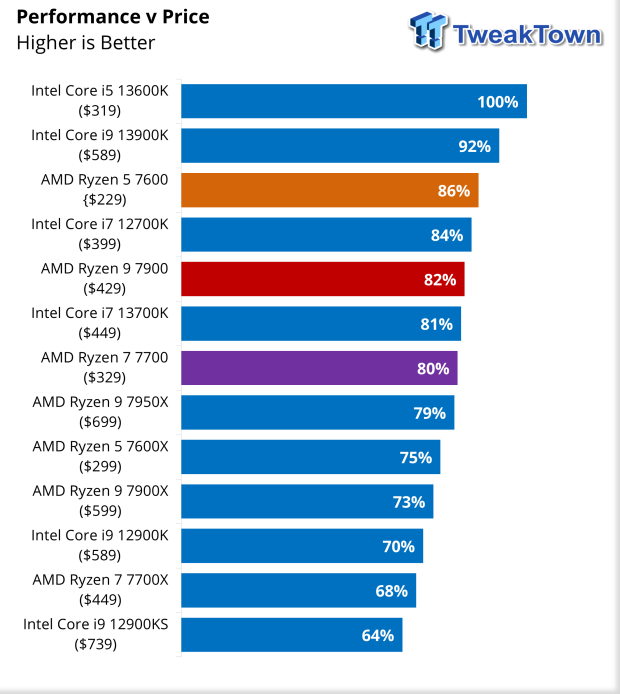 I've been pleasantly surprised by the range of AMD 65W CPUs launched today. Looking at gaming first, we saw minimal performance loss at 1080p when comparing these new SKUs to the original launch stack and, in some cases, a small uptick in performance. At 1440p and 4K, performance was still quite good, though down a few FPS compared to higher TSP parts.

Power numbers across the entire range were mind-blowing. 106 watts peak was measured from the 7900 during testing and, when crossed with the performance numbers from Procyon, landed it as the top CPU performance per watt. The same could be said for the 7700 and 7600, landing top three in our PPW chart above.

Onto pricing, where AMD may have gone wrong once again, we note the launch MSRPs from the beginning of our review, $429, $329, and $229 for the 7900,7700 and 7600, respectively, and a quick look at the current market will note many of the X series SKUs have already come down quite a bit since launch.

Many SKUs, like the 7900X, are just $10 more than the launch price of the 7900. The same is repeated across the lineup, making us believe there will be price cuts in the future for these newly launched SKUs. You may want to wait a bit.

Adding 65W Ryzen CPU SKUs, AMD has furthered the availability and reach of it new AM5 platform.