Razer expands its offerings with the AMD powered Blade 14, a solid performer for gamers, but it does lack in the battery department for anyone wanting a multi-purpose solution. 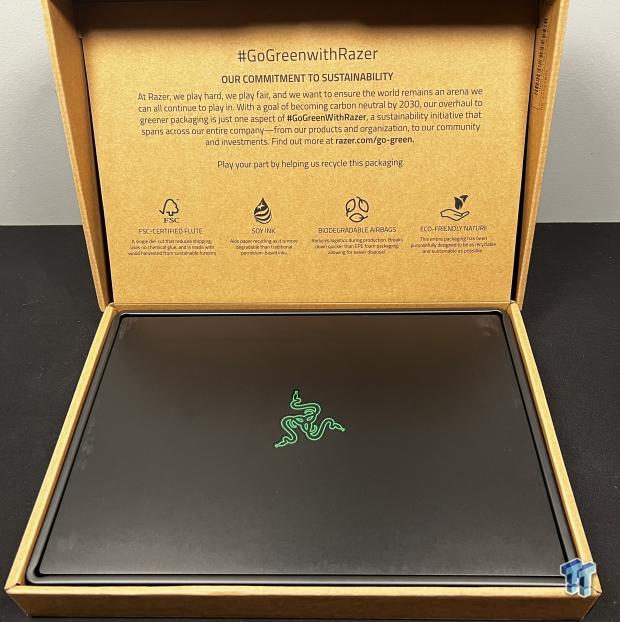 This year's Blade 14 from Razer departs from the traditional combo of Intel CPUs with discrete GeForce graphics, instead opting for the high-end of AMD's Ryzen 6000 series lineup to handle the processing. Interestingly enough, Razer didn't opt to make this platform a pure AMD design with a discrete Radeon GPU, instead going with what they know in the GeForce RTX 30 series from team green.

Specifications of this platform look quite good on paper. At the top, we have the AMD Ryzen 9 6900HX CPU, AMD's top SKU for mobile, which is an 8-core / 16 thread design with a 4.9GHz boost clock. This is paired with 16GB of DDR5 4800 RAM, which is soldered, so it's not upgradeable. We also have a 1TB Gen4 NVMe solution offering a nice start for large game installs.

The NVIDIA GeForce RTX 3070 Ti handles discrete graphics in our SKU. The Blade 14 can be configured with an RTX 3080 or 3080 Ti for those wanting more. Display options include the QHD 165Hz IPS panel in our review sample or a Full HD 144Hz panel. 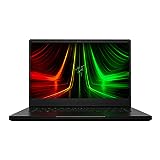 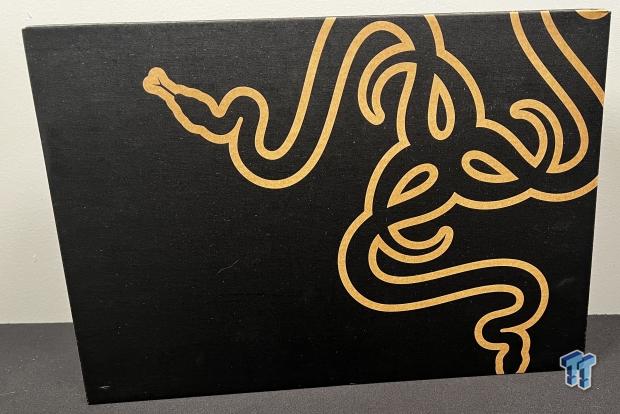 Packaging for the Blade 14 included the standard brown box adorned with the Razer logo. 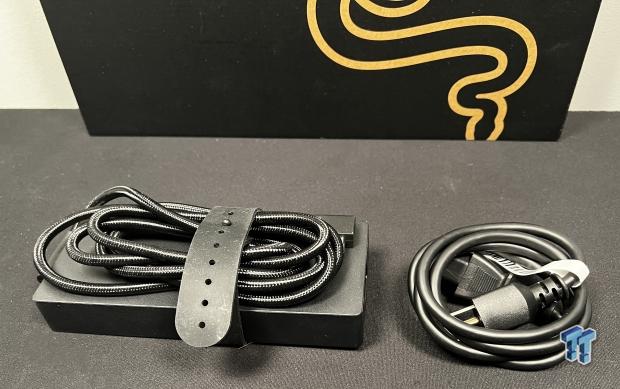 Included in the box, the Blade came with its power adapter, as seen above. 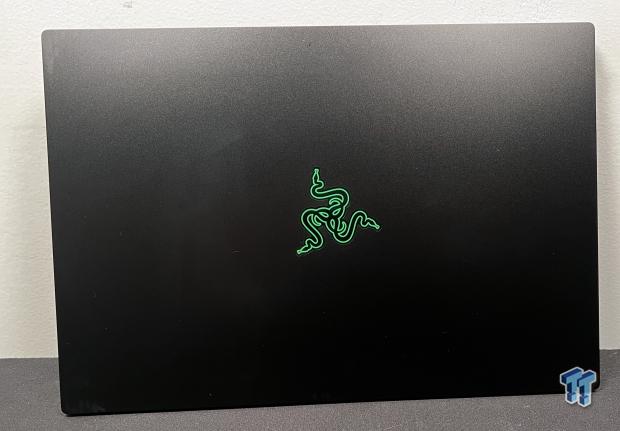 Unboxing, The Blade carries a satin finish, all black which makes the Razer logo stand out prominently. 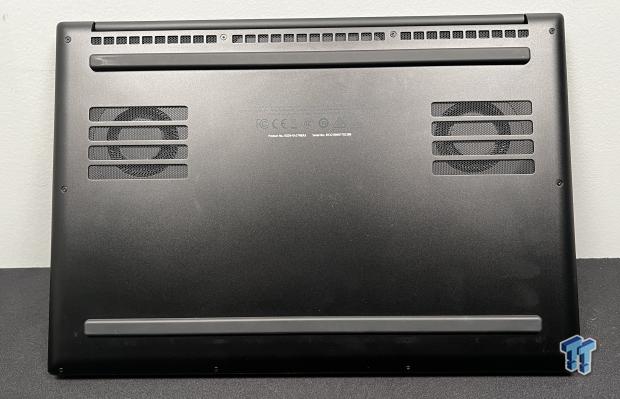 The bottom includes two large cooling vents to bring fresh air into the chassis; you can see that air moves out through the top. The bottom also has two rubber bars to lift the chassis off your desk to allow more airflow.

The right side starts us off with a Kensington lock far right, followed by the HDMI output, USB-A port, and USB-C.

Moving to the left side, we have a power input, USB-A, and USB-C. Last a 3.5mm audio jack. 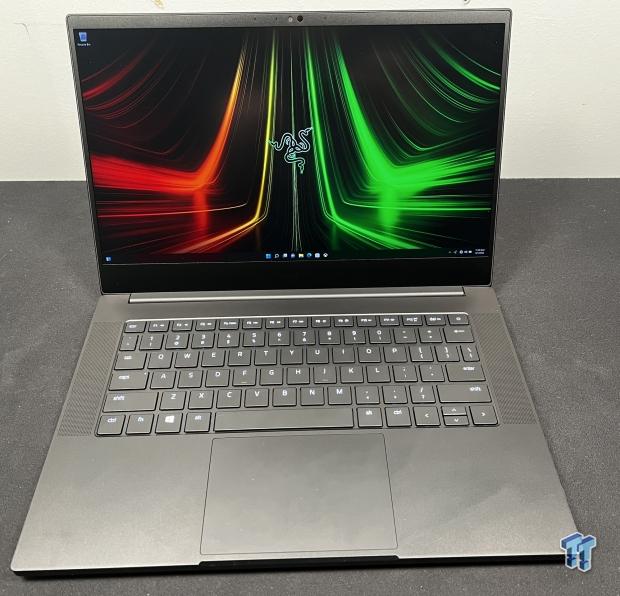 Opening the unit, the trackpad is large and takes up much space on the Y axis. The keyboard is backlit with Chroma RGB and is sunken into the chassis, and speakers flank each side of the keyboard. 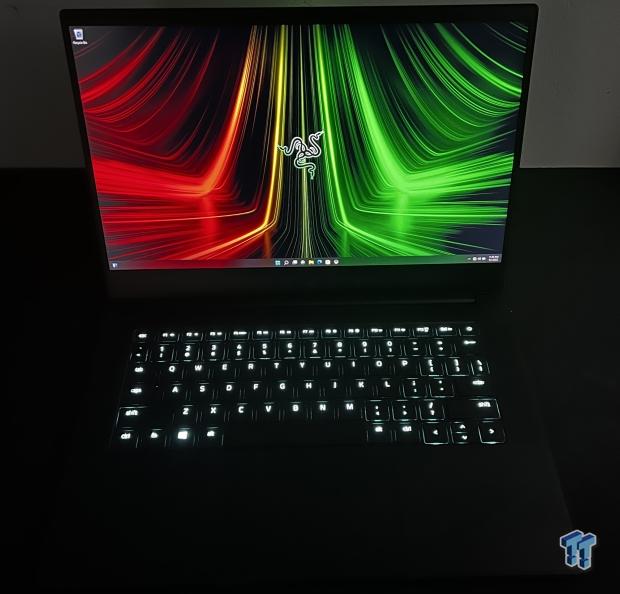 You can see the Chroma RGB in action with the lights turned down. 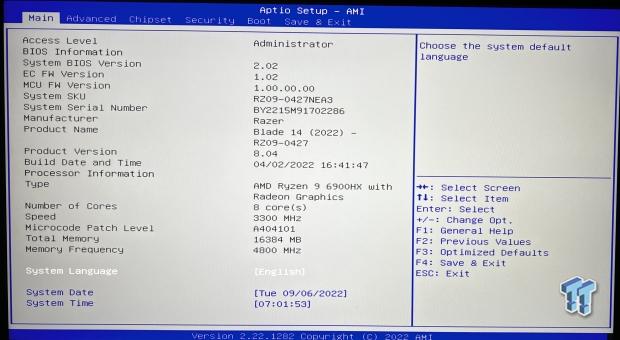 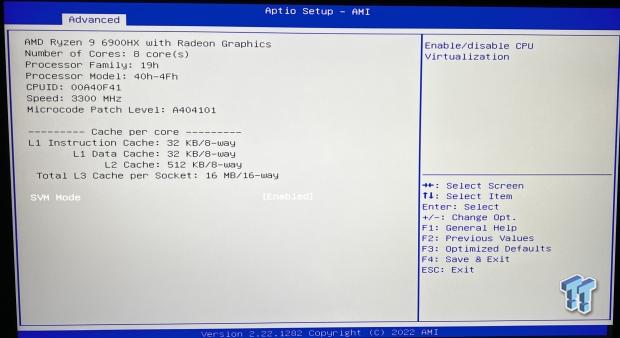 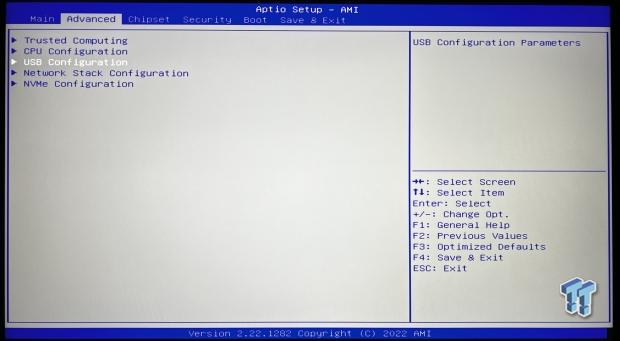 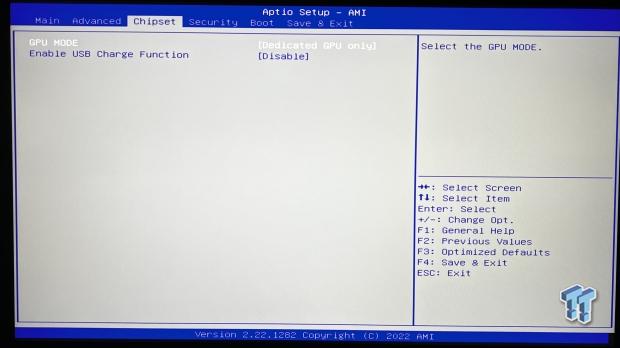 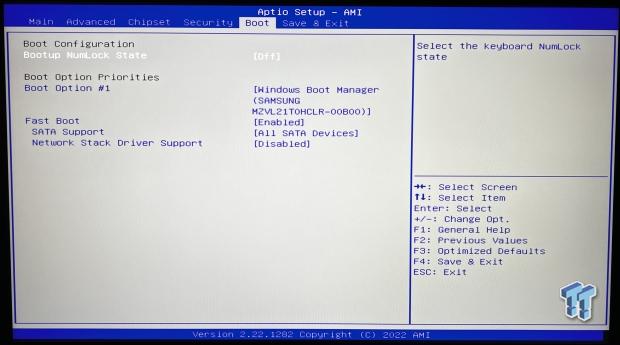 Razer goes with an old-school AMI BIOS design, with no mouse functionality, just arrow keys. At the first level, you will get all the information about the hardware used in the machine, along with serial numbers, mac address, etc.

The following screen will allow the configuration of the CPU power levels, USB ports, Network stack, and NVMe. In the end, we have basic options like boot priority and an option for fast boot. 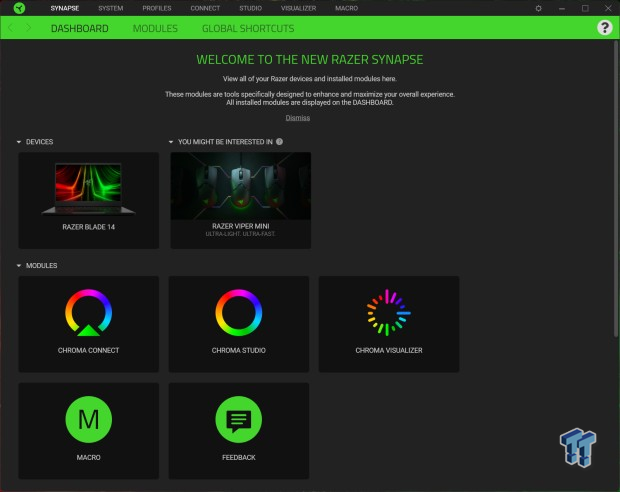 The software for this platform is Synapse, allowing full configuration of the Blade 14. At the start, you will note the laptop shows up as a device in the dashboard. Across the top, there are further options for systems, profiles, and Chroma Studio. 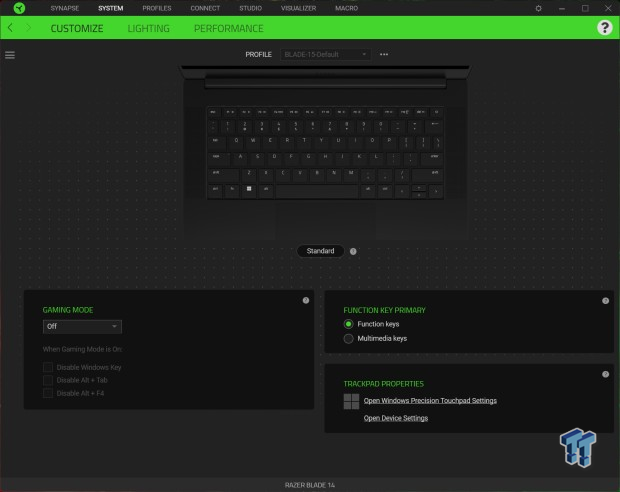 If we move over to the system, we can customize the keyboard's Fn and multimedia keys. You can also turn on gaming mode here to disable the Windows key. 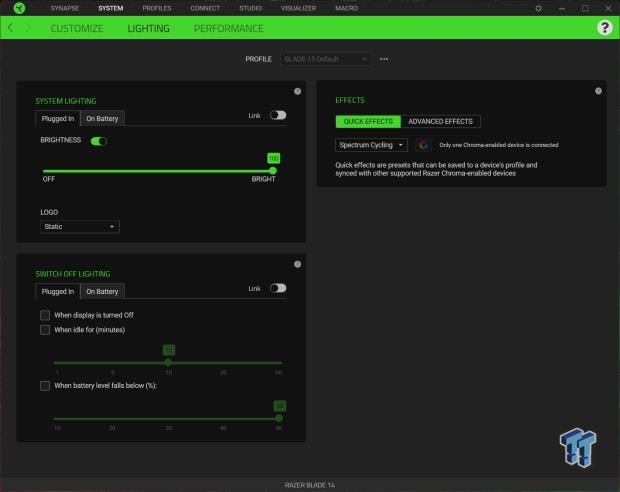 Moving over to the lighting tab, there are a few options. These include functionality when on AC power and battery; you can also choose to switch off lighting during certain situations and Chroma Studio to configure the lighting colors. 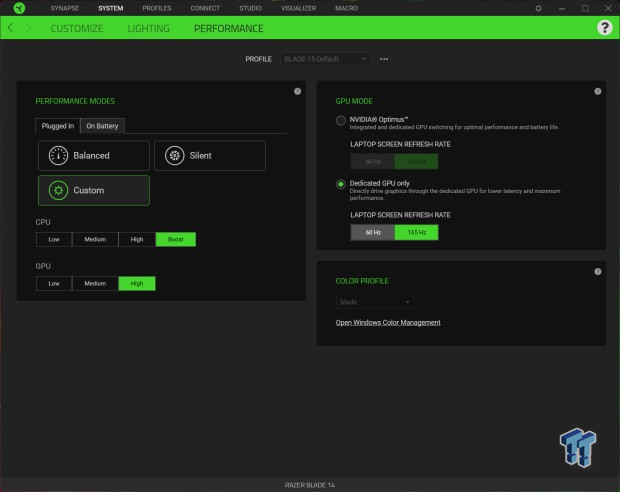 The performance tab will allow you to customize the fan profile; we use a custom always-on for testing. You can also disable NV Optimus here and go with dedicated only. 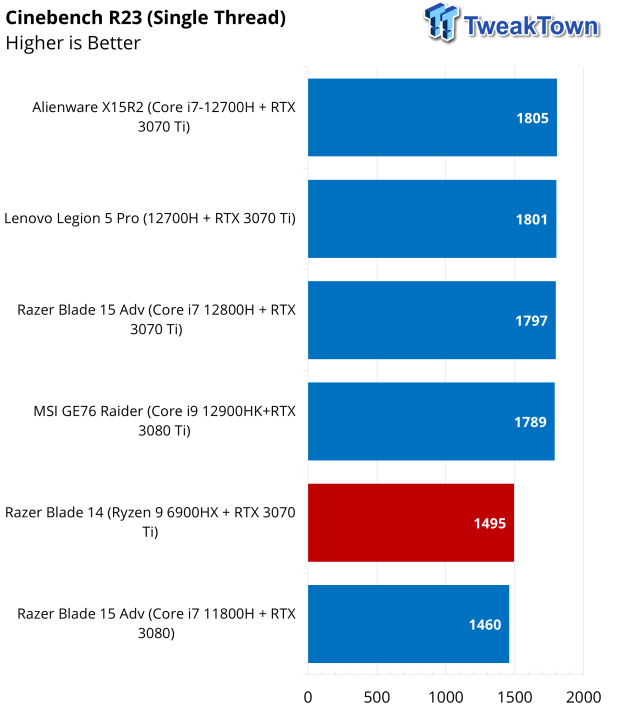 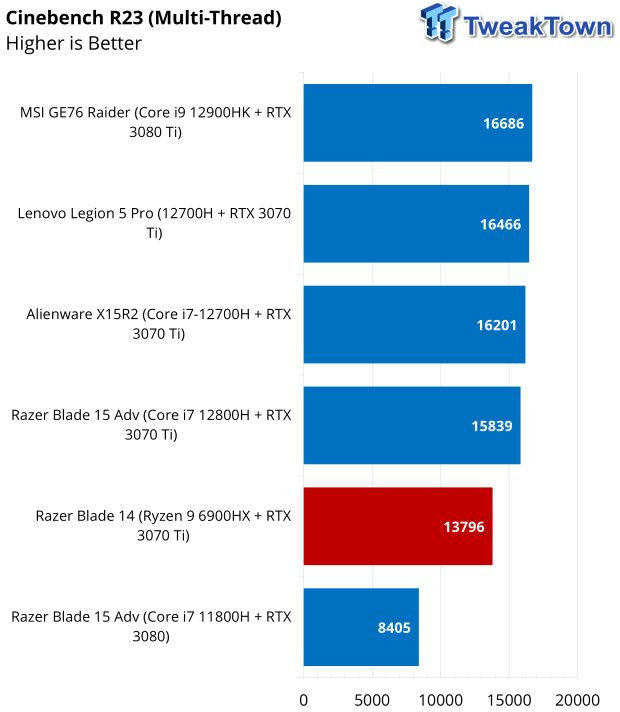 Multi-thread was much better, coming in at 13796, still a bit behind Intels 12th Gen but a good amount better than 11th. 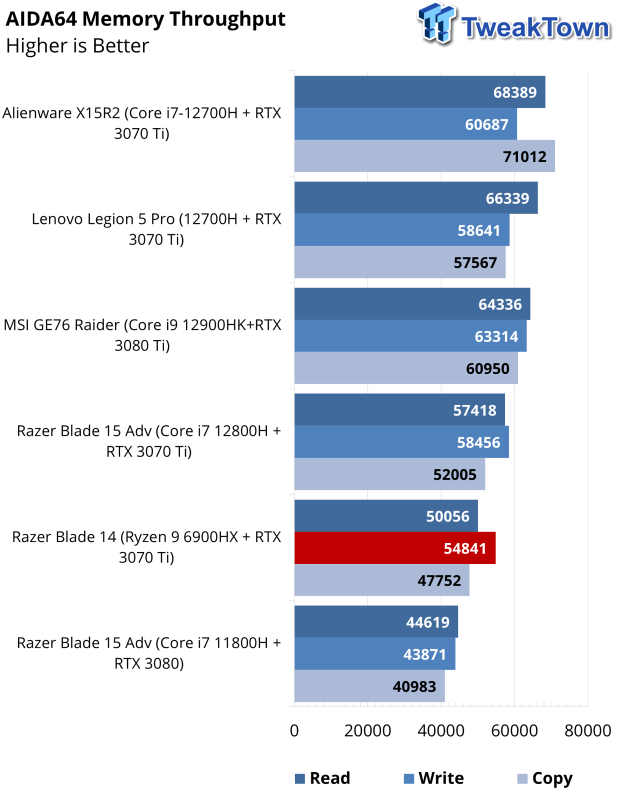 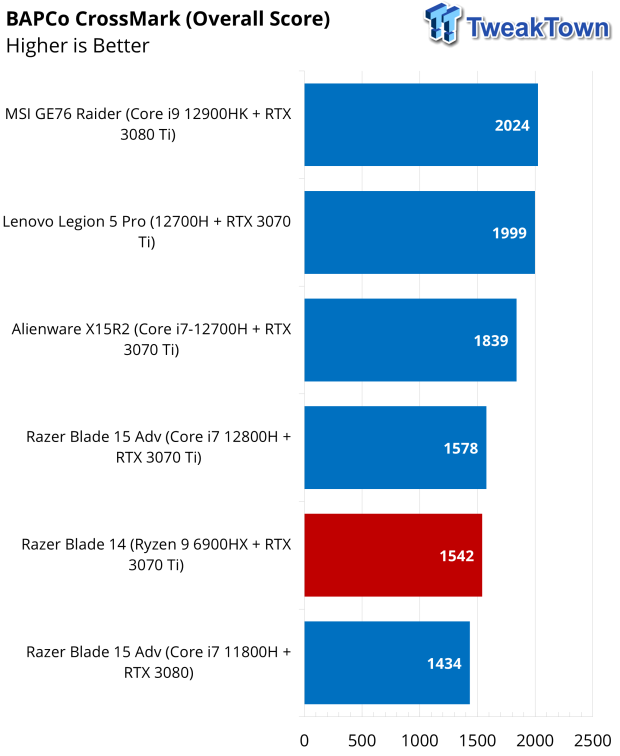 CrossMark landed the Blade 14 near the bottom, just above last year's Blade 15 Adv, with a score of 1542. 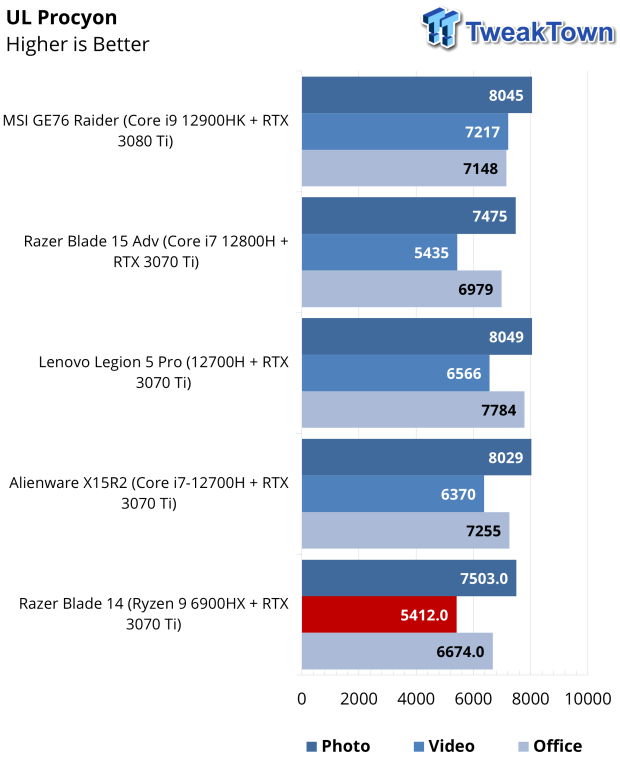 Looking at our real-world workloads with Procyon, the Blade 14 was consistent in its performance, scoring 7503 in office, 5412 in photo, and 6674 in video. 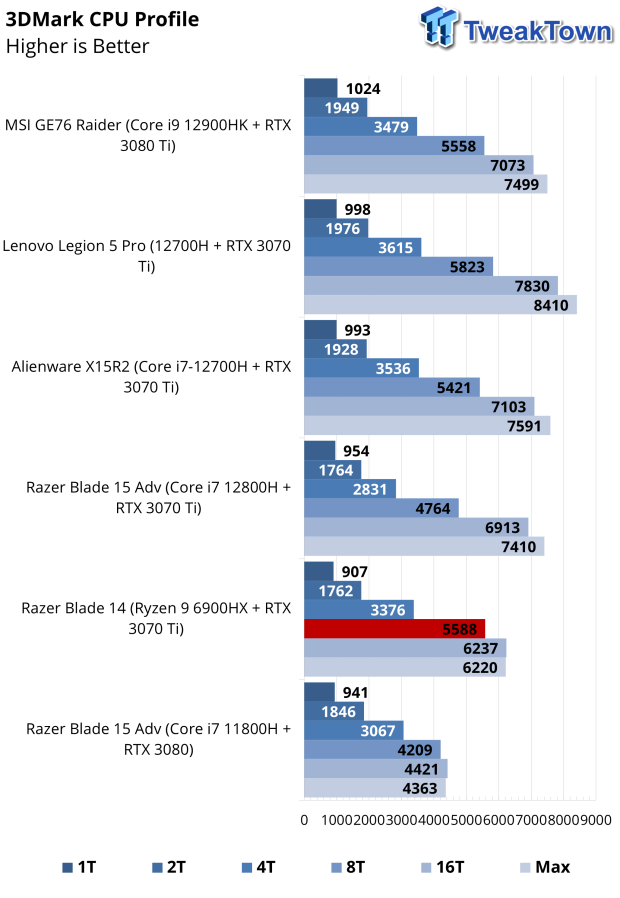 CPU Profile offered 907 single threads and 6220 at sixteen threads. The Blade 14 did best at eight threads with a score of 6237. 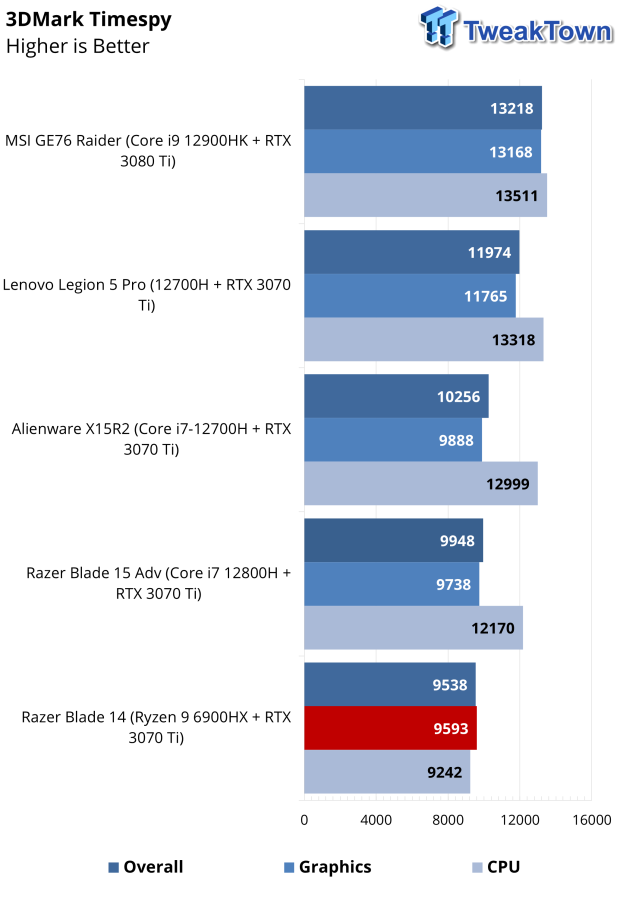 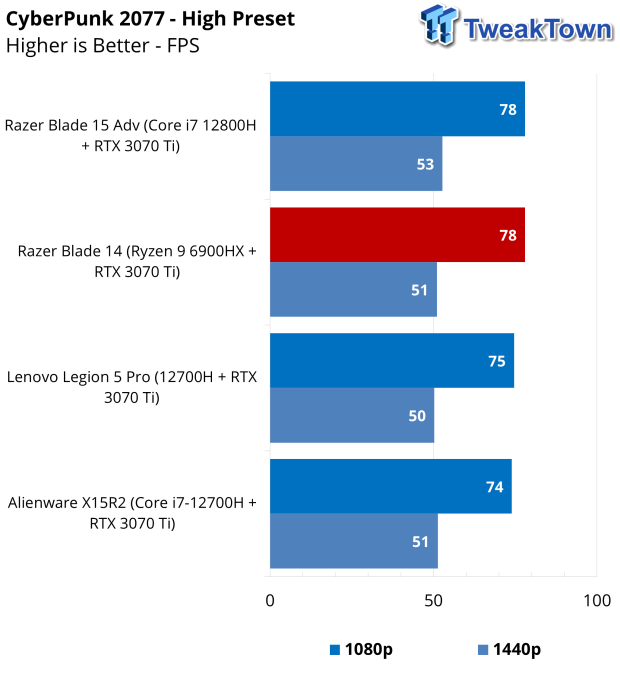 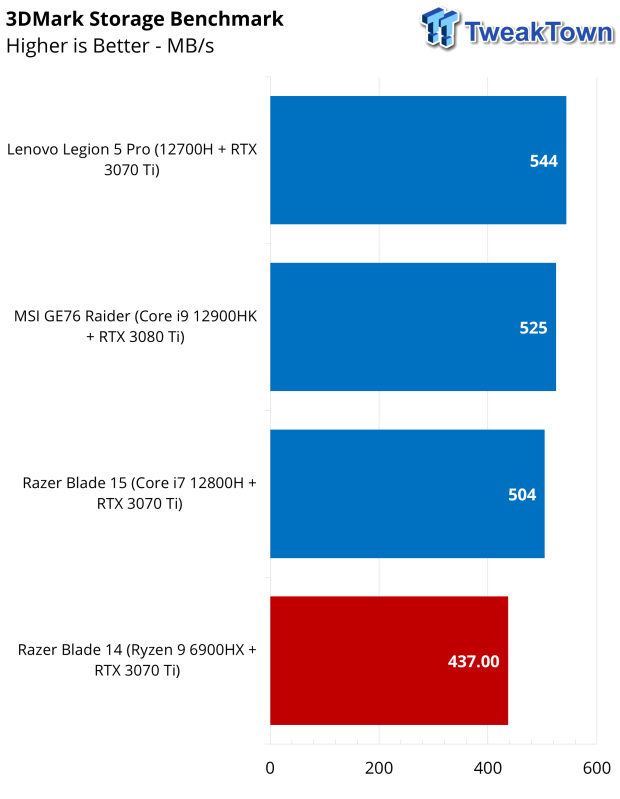 Storage for this platform scored 437 MB/s of bandwidth, sadly the lowest we have seen. 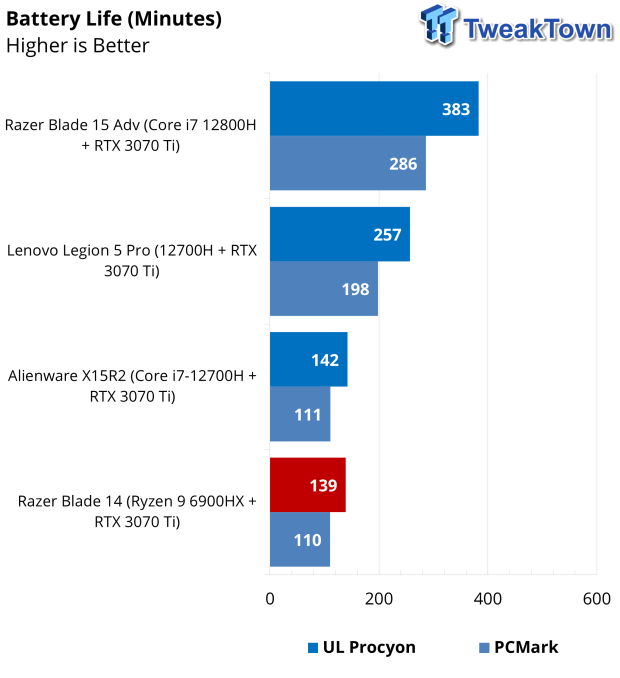 Battery life for the Blade 14 offered 139 minutes with the UL Procyon workload and 110 minutes using the PCMark workload. Overall, it did have the least amount of battery life of the platform we have tested. 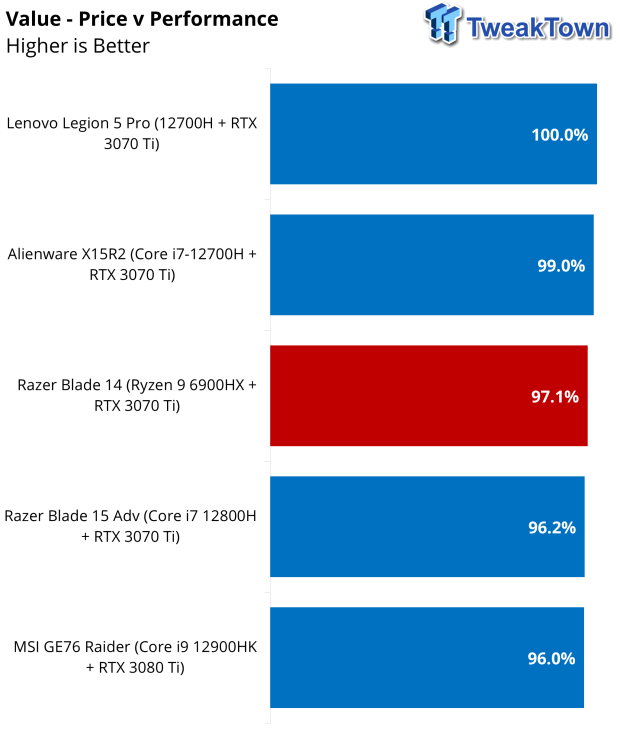 Going over the performance of each platform, the Blade 14 landed middle of the road at 97.1%, offering a good amount of value for the available performance.

I didn't spend much time with the Blade 14, probably not as much as I could have, but I had an impending CPU launch I was testing for. So after Blade 14 finished testing, I did write a few articles on it and ran through a few sessions of Warzone to get a feel for the keyboard and display before sending it back.

With that said, the trackpad isn't the greatest. To me, this is expected because most gamers are going to break out their favorite mouse anyways, so why put a ton of R&D into something that will immediately be replaced? The keyboard was good, not as good as a Lenovo X1, but fantastic for a portable gaming machine, with a solid return on the keys and good feedback on the way down. Chroma lighting on the keys was good but can be a bit bright, but again manageable with Synapse.

As for performance, the Ryzen 6900HX lets this system down, particularly in productivity workloads. As you can see from our charts, in nearly every case, it's chasing 12th Gen Intel platforms, including its larger Blade 15 counterpart. That said, legit gaming workloads, like our CyberPunk 2077 and Timespy benchmarks, showed the Blade 14 held its own, so this could be a terrible platform in synthetic benchmarks but produces the FPS when needed.

Outside of this, the display is gorgeous; nearly no bezels, and its IPS-like characteristics give it deep color and black blacks, if that makes sense. Overall a solid platform if you must have an AMD CPU.

Razer expands its offerings with the AMD powered Blade 14, a solid performer for gamers, but it does lack in the battery department for anyone wanting a multi-purpose solution.