The NUC BOX-1260p is the perfect way to experience a 12th Gen Intel Alder Lake P Series platform, fully outfitted with the best in connectivity and networking, in a small and capable design for office tasks.

It wasn't until recently that I discovered ASRock's industrial portfolio, offering a wide array of platforms that power everything from factory automation to video surveillance systems and even slot machines. Their latest releases encompass a range of Alder Lake-powered systems, from fanless and fanned NUC-type machines to SFF motherboards. We reached out to ASRock and asked about their NUC BOX series and, more specifically, the new 1260p model.

The latest NUC BOX platforms are all powered by Alder Lake P series CPUs, similar in design to the NUC 12 Pro from Intel. The Core i7-1260p powers the sample sent to us, a 28W CPU offering 12 cores, the split being 4 performance and 8 efficient cores. These are barebones units, so any potential consumer must provide the DDR4 SO-DIMM.

Sabrent was kind enough to send over 32GB of their recently released DDR4 SO-DIMM for this review. The model in house supports a peak memory capacity of 64GB at 3200MHz. Onboard graphics are powered by Iris Xe with both HDMI and DP outputs and a max resolution of 4K 60p.

The expansion includes a single m.2 Key E slot for CNVi Wi-Fi adapters; our unit was supplied with an AX211 from Intel. Additional networking capabilities include dual 2.5Gbe, again powered by Intel with the i225LM chipset. Storage support includes one PCIe Gen4 m.2 slot and a breakout cable for SATA support. The audio is powered by the Realtek ALC233.

Ports include two USB 3.2 Gen 2 on the rear I/O, while the front offers two Gen 2 ports, one USB-C and the other USB-A. A third port is also available, and it supports Gen2x2 along with some USB4 and Thunderbolt 4 devices, which ASRock has a compatibility list for. The pricing for the ASRock Industrial NUC BOX-1260p comes in at $649.99 barebones with a one-year warranty. 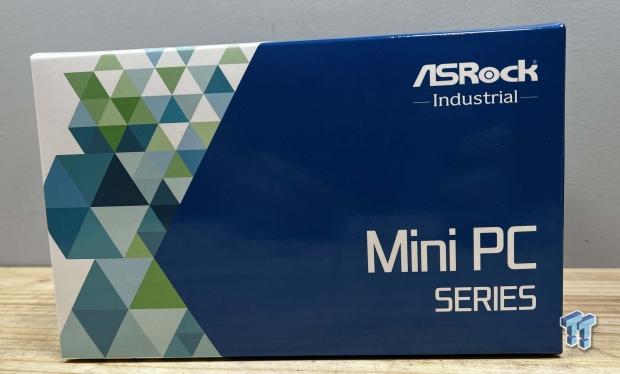 Packaging is simple, with ASRock Industrial branding at the top. 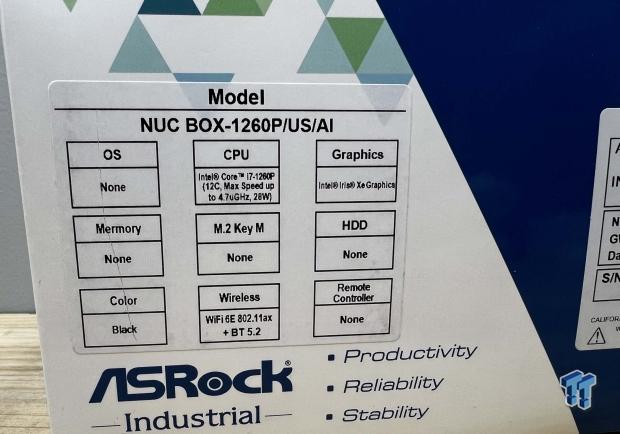 On the back, you will find a sticker with the build information. 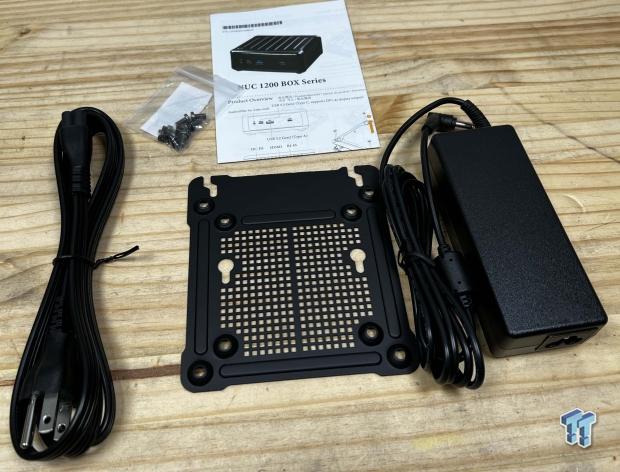 You will find the VESA mounting plate and the power adapter and screws in the box. 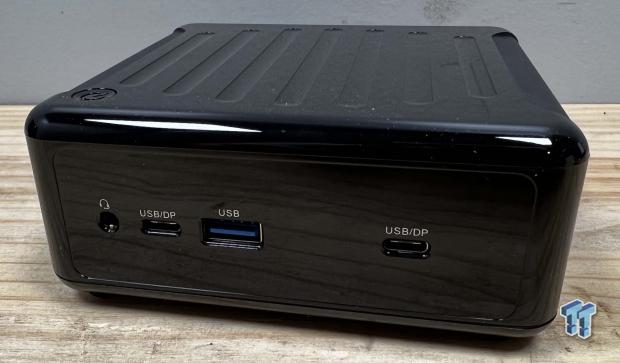 Unboxing, the NUC BOX carries a standard "NUC" footprint and a glossy exterior with the power button on top. The front offers the three USB ports mentioned above and a 3.5mm jack on the far left.

The rear I/O is tight, power on the far left followed by two USB 3.2 Gen2, HDMI and DP. We have the dual 2.5Gbe LAN and Kensington lock above the far right. 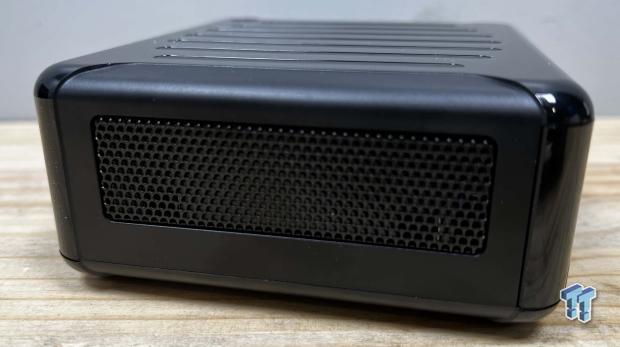 The sides of this unit are vented to pull in air. 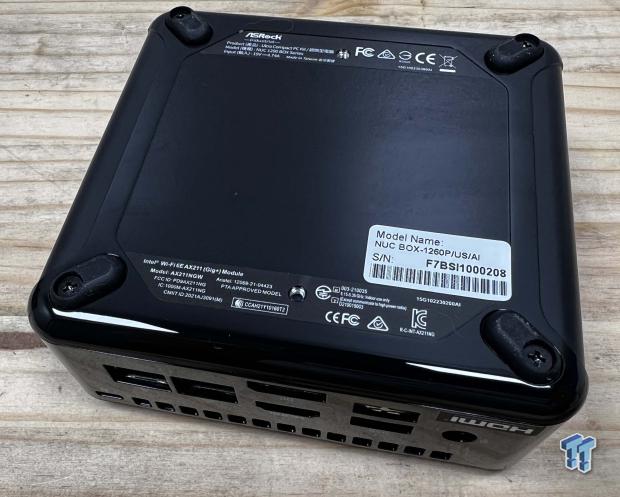 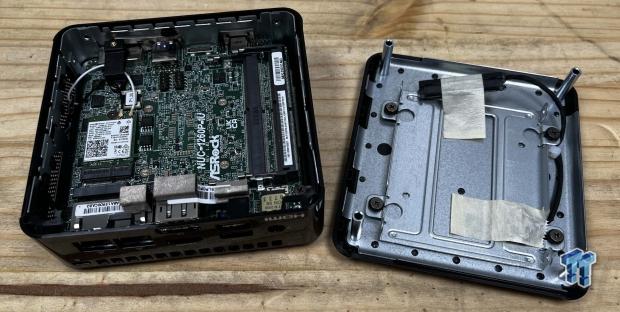 Internally, the board comes equipped with the AX211 Wi-Fi card with a slot above it open for NVMe and both SO-DIMM slots off to the right. On the machine's lid, ASRock has taped the SATA breakout adapter. 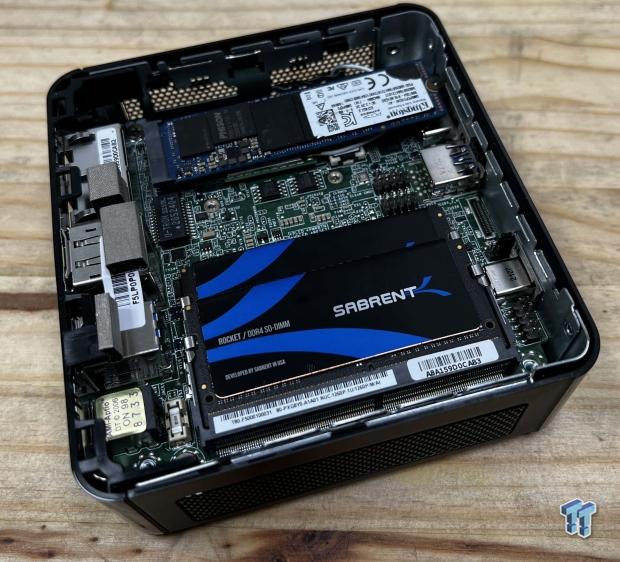 With our memory installed, we are ready to boot up and install Windows for testing. 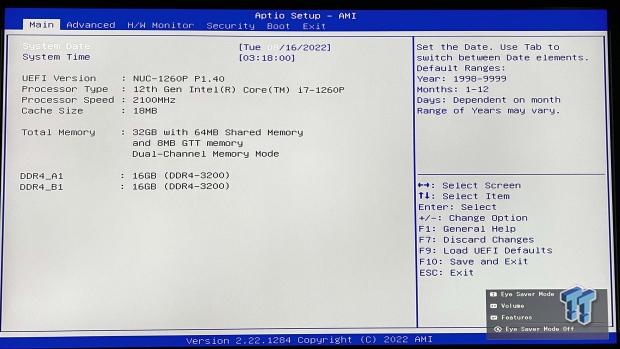 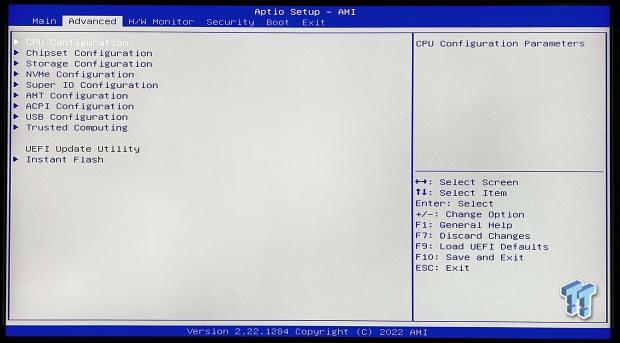 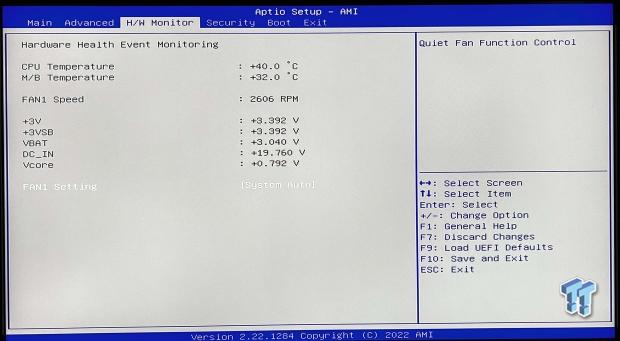 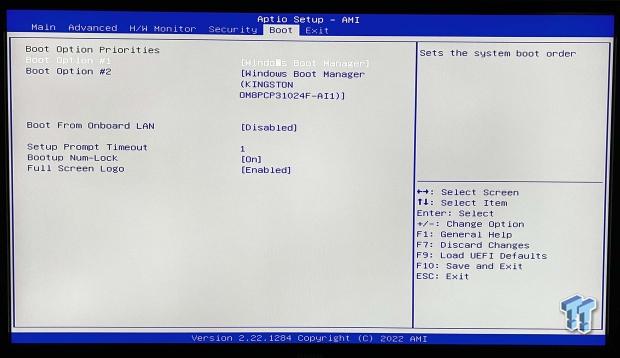 The BIOS is the old-style keyboard setup. The main menu offers hardware information. Into the advanced menu, you have options for configuring the CPU, chipset, and NVMe settings. Further down, you also have the option of updating the BIOS with Instant Flash.

Cinebench is a long-standing render benchmark that has been heavily relied upon by both Intel and AMD to highlight their newest platforms during unveils. The benchmark has two tests, a single-core workload that will utilize one thread or 1T. There is also a multi-threaded test that uses all threads or nT of a tested CPU 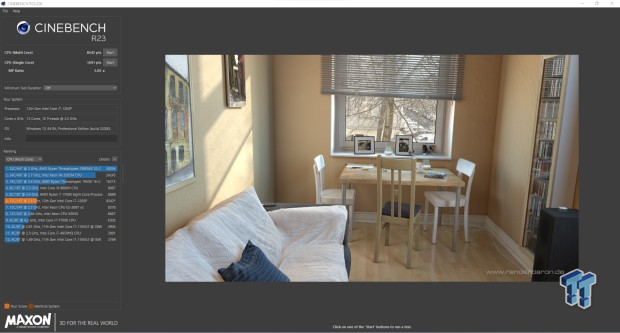 With no real comparison machines in the lab, we opted to just show the raw data from each benchmark. Starting with R23, we see the ASRock offer 1691 single thread and 8542 multi-threads. 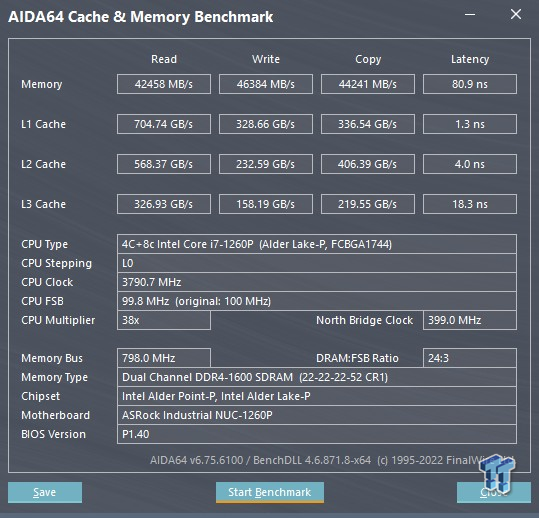 Memory bandwidth comes in at 42K read, 46K write, and 44K copy with our Sabrent sticks. 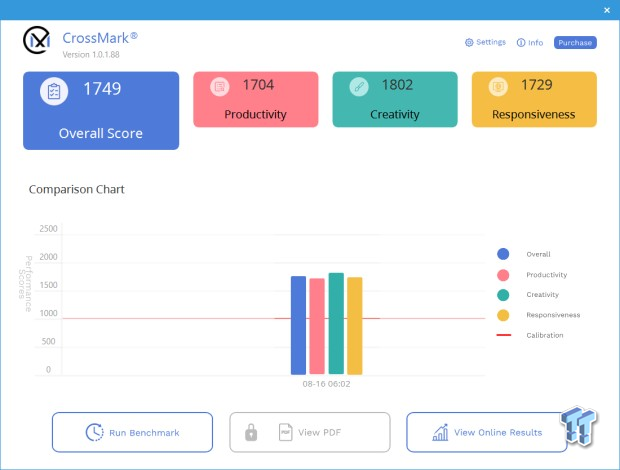 CrossMark allowed a score of 1749 for the NUC BOX. The breakdown was 1802 for creativity, 1729 for responsiveness, and 1704 for productivity. 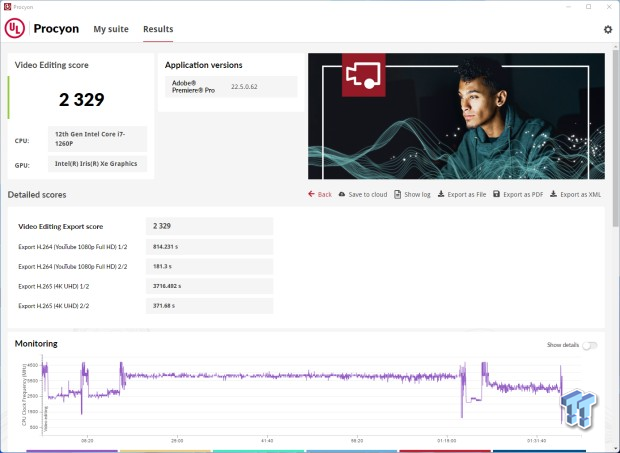 UL Procyon started us out with a video score of 2329. 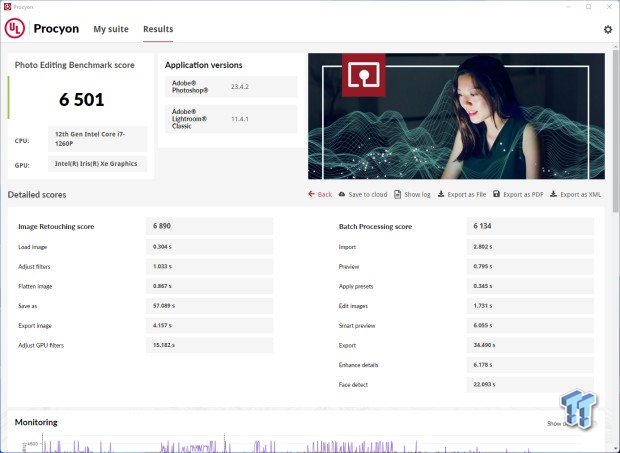 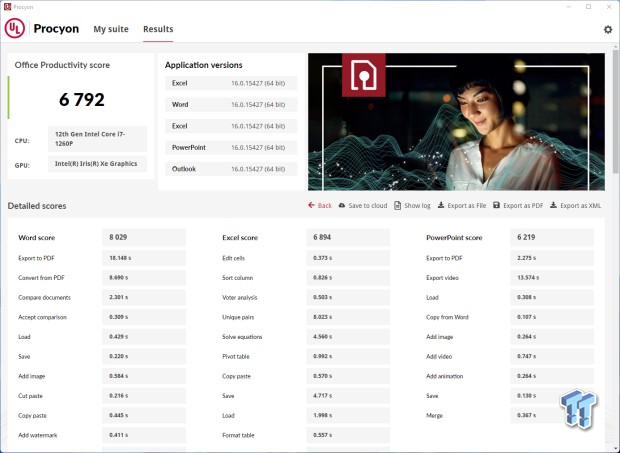 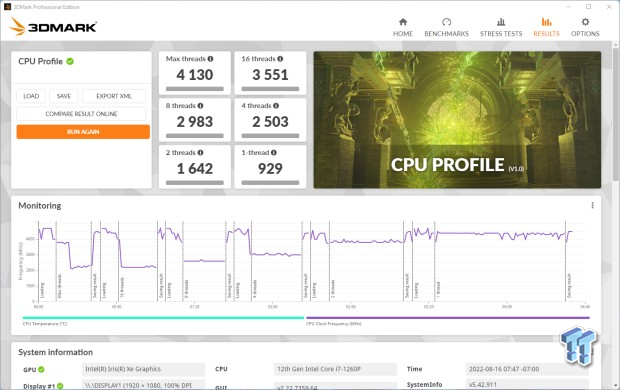 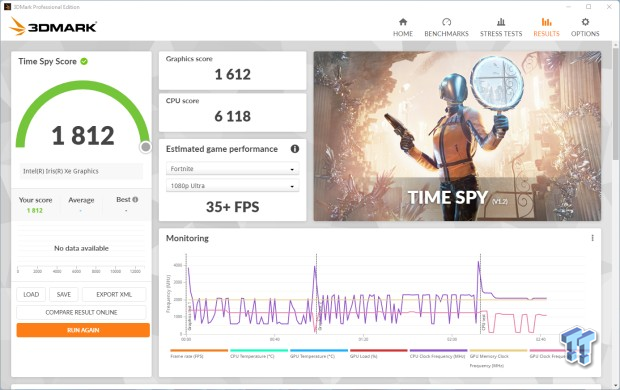 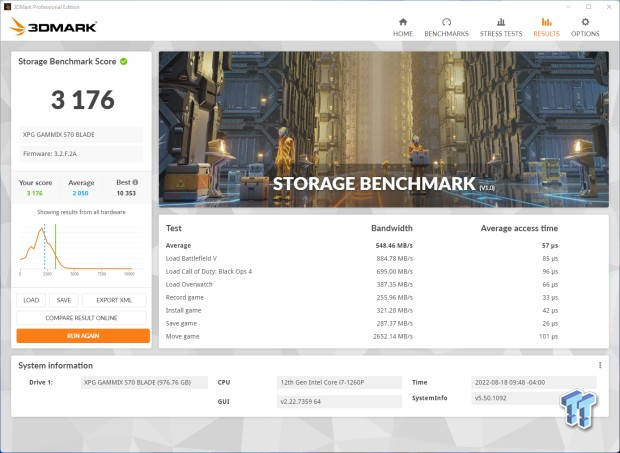 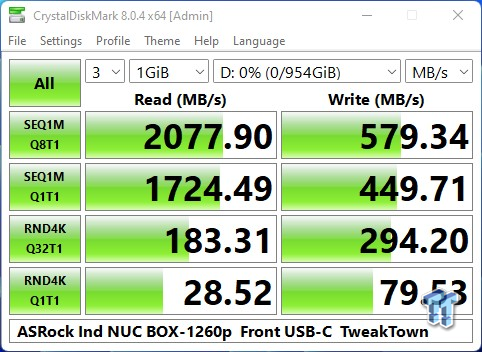 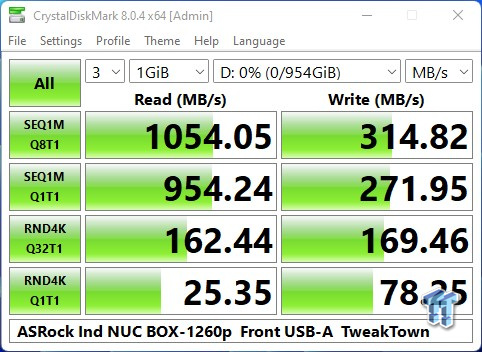 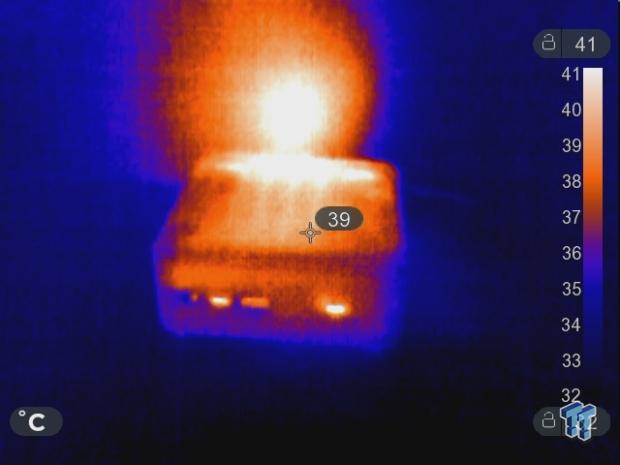 With our Seek Thermal Camera, we got some good images of the NUC BOX during testing. As seen above, the peak temperatures hover around 41c out the back of the unit.

Going into this review, I was most interested in the performance difference with Alder Lake P CPUs when used in a more friendly cooling environment instead of the typical ultra-thin laptop setup. On that note, it's quite stunning how much the 28W 1260p opens up with better cooling, noted by the increased performance starting with our R23 scores, especially single core coming in nearly 200 points higher than the same CPU deployed in a notebook.

CrossMark showed a similar result, scoring 1749 with this NUC Box, 100 points higher. This trend continues through most CPU-related testing, including CPU Profile in 3DMark; another 100 points were gained in this scenario. Procyon, which uses legit real-world workloads, had the largest gains, Office pulling 6792, nearly 800 points higher, and Photo 6501 - 1500 points higher!

As for the build, there isn't much ASRock left out in this build. It has dual 2.5Gbe and WiFi6e that includes BT5. USB 3.2 ports are a bit slim on the rear of the unit to make room for both DP and HDMI, but you do have two ports enough for a keyboard and mouse. The front panel, which is infinitely more accessible, offers three ports, one of which supports Gen2x2 in our testing, and ASRock says it supports "some" Thunderbolt devices. This leaves us wondering why not deploy a legit Thunderbolt 4 port, as the chipset and CPU both support it.

Pricing for the NUC BOX-1260p is carrying an MSRP of $649.99, and this puts it slightly cheaper than the just-announced NUC 12 Pro from Intel and an SFF box you should look at if you're in the market for a small and capable PC that will boss around office-type applications and tasks.

The NUC BOX-1260p is the perfect way to experience a 12th Gen Intel Alder Lake P Series platform, fully outfitted with the best in connectivity and networking, in a small and capable design for office tasks.