The latest and most important Laptops news - Page 3.

Samsung's next-gen Galaxy Book 2 Pro will be fully unveiled this week during Mobile World Congress (MWC) in Barcelona, Spain... but now we have some early rumors to report on. 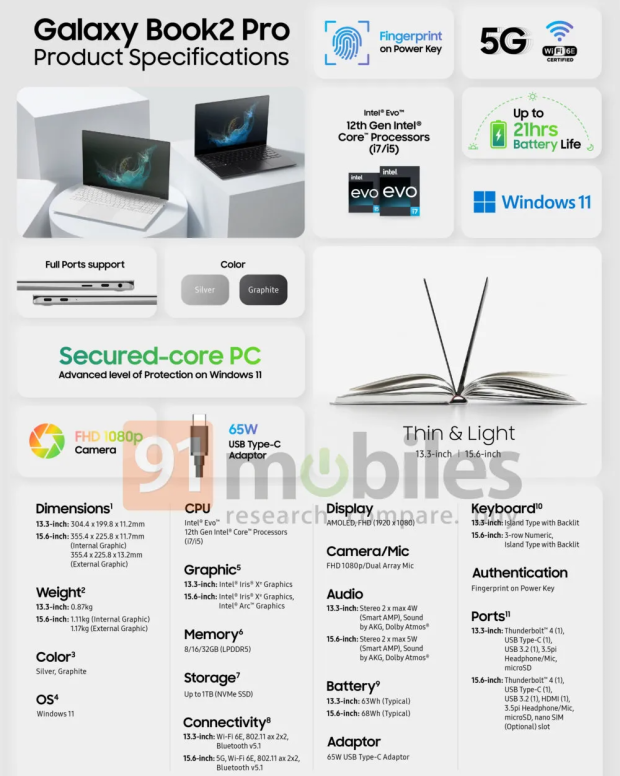 But the larger 15.6-inch model has higher-end graphics thanks to the Intel Arc Alchemist discrete GPU, which adds another 600g to the overall weight -- 1.11kg to 1.17kg -- which would be for the beefier thermal solution for the discrete GPU. As for the Samsung Galaxy Book 2 it offers up to 21 hours of battery life, packs 5G and Wi-Fi 6E connectivity, runs Windows 11, and it's all delivered over a 65W USB Type-C power connector. 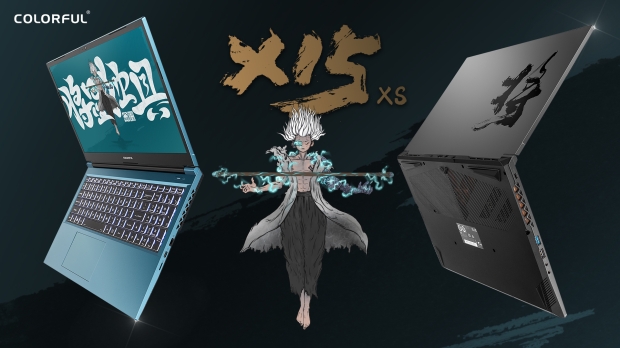 MSI is preparing its new Summit E16 Flip EVO laptop which will be a new 2-in-1 ultra-portable business laptop, that has been revealed on the PugetBench website. 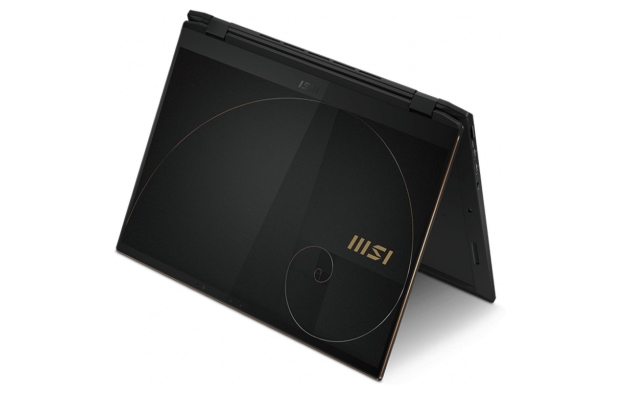 Inside, the new MSI Summit E16 Flip EVO laptop can be configured with up to Intel's new Core i7-12700H processor (14 cores and 20 threads) with 45W TDP. The previous E16 Flip EVO laptop had LPDDR4X memory but the new version should be upgraded to LPDDR5-6400, which is a big deal for laptops.

But it gets even more interesting when it comes to the GPU department, where the MSI Summit E16 Flip EVO laptop has an Intel Arc Alchemist A370M mobile GPU, steering away from the previous E16 Flip EVO that used the NVIDIA GeForce RTX 3050 family of GPUs.

Craob X: a new Alder Lake laptop without ANY ports on it at all

Craob X is a new concept laptop that has been teased as a totally portless laptop, that is also wirelessly charged -- check it out: 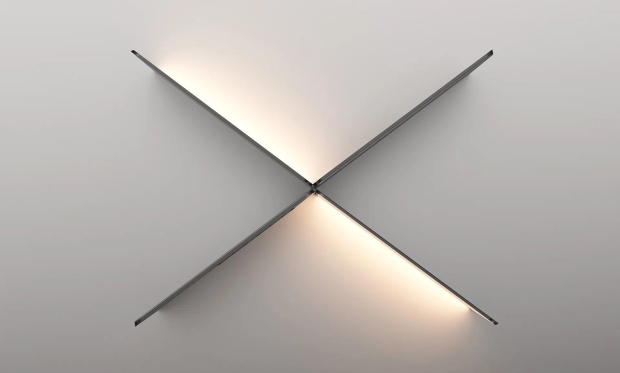 There's a punch-hole camera on the 13.3-inch 4K+ bezel-less display, while an impressive magnetic charger will sit on the back of the Craob X laptop that will power the laptop -- as well as packing some USB Type-A and USB Type-C ports, Thunderbolt connectivity, MiniJack, SD card slot, and a charging port.

Continue reading: Craob X: a new Alder Lake laptop without ANY ports on it at all (full post)

CyberPowerPC unveiled its new Trace VI Edge Pro Liquid Cool series laptop, powered with Intel and NVIDIA's latest chips but get this: active liquid cooling, built into the laptop but externally... check it out:

The company hasn't detailed which GPU will go into the liquid-cooled gaming laptop, but with an external liquid cooler, I would expect to only see NVIDIA's new flagship GeForce RTX 3080 Ti Laptop GPU with 16GB of GDDR6 memory. CyberPowerPC will have mean external reservoir that connects to 2 x quick-release connectors on the back of the laptop. The CPU and GPU temperature drops are massive... meaning you'll continue to hit max CPU and GPU clocks thanks to the chips running far cooler being cooled by water.

Not only that, but ASUS is using its MUX Switch technology that offers improved battery life, reduced latency, and increased performance by an average of 15% according to ASUS. ASUS MUX Switch ensures your components are running at their max, all the time -- while you've also got AMD's Zen 3-based Ryzen 9 6900HX processor cooled with Liquid Metal, whilst upgraded Arc Flow Fans have 84 curved blades that were specially shaped to maximize airflow with minimal noise. 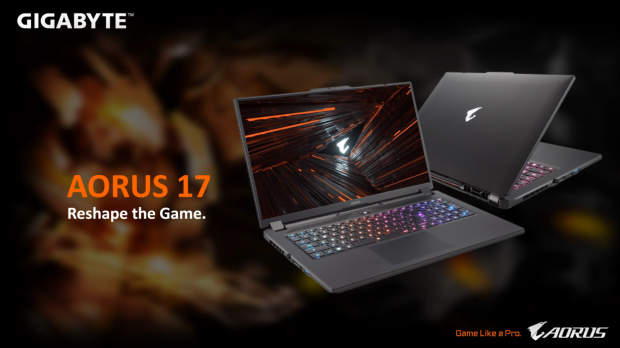 Intel's new 12th Gen Core "Alder Lake" CPUs are powering the AORUS 17 laptops, with the flagship Core i9-12900HK processor inside of the flagship AORUS 17. The new laptops can be configured with up to 64GB of DDR5-4800 memory, while you'll have 2 x PCIe 4.0 NVMe M.2 SSD slots for a bunch of super-fast storage. 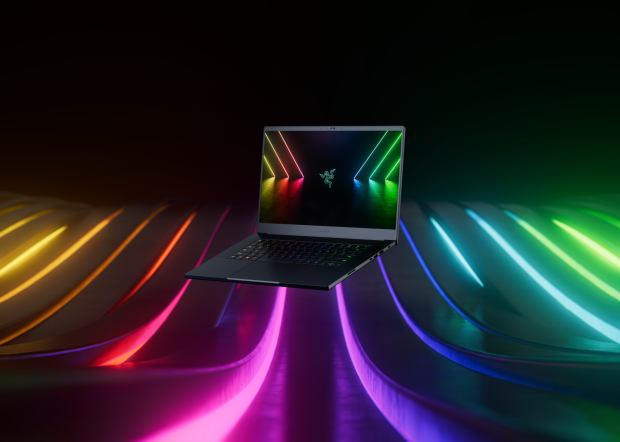 Alienware has just unveiled its very latest m17 R5 AMD Edition gaming laptop, which has the title of being the world's most powerful 17-inch AMD Advantage laptop. 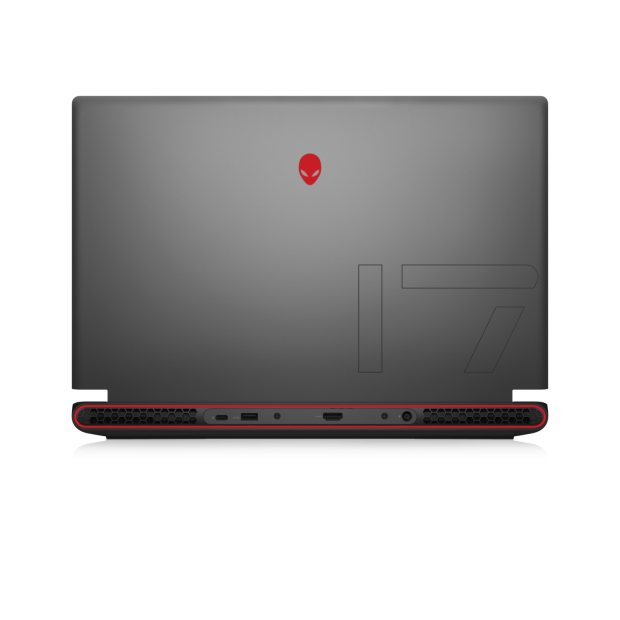 There's up to 64GB of DDR5-4800 memory supported, as well as 2 x 4TB PCIe 4.0 M.2 NVMe SSDs for RAM and storage. Alienware is including enthusiast-grade 2.5GbE networking as well as a 1GbE networking port for dual wired Ethernet, as well as Wi-Fi 6E. GPU wise there's the option of AMD and NVIDIA, with the latest Radeon RX 6850M XT graphics card with 12GB of GDDR6 memory, or the flagship NVIDIA GeForce RTX 3080 Ti Laptop GPU with 16GB of GDDR6 memory.

ASUS has introduced its next-gen Zephyrus Duo 16 dual-display laptop at CES 2022, with a brand new "Nebula HDR" display and Dual Spec panel. Check it out: 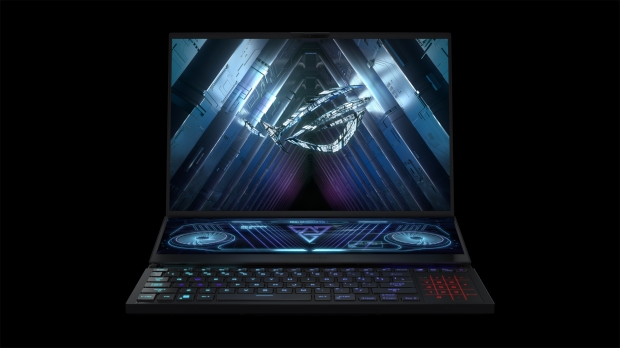 ASUS says that the "centerpiece of this flagship machine" is the mind-blowing Nebula HDR display, 100% coverage of the DCI-P3 color space, Pantone Validation, high refresh rate, Adaptive-Sync and under 3ms response time. Better yet, we have a huge 1100-nit peak brightness, with 512 Mini-LED dimming zones that work with AUO's AMLED technology to "reduce haloing, thanks in part to a polling rate of 5400Hz. Vibrant, colorful images pop off the screen with more impact than any laptop gaming display before it".

The Nebula HDR panel offers two resolutions and refresh rates: 4K 120Hz and 1080p 240Hz, for the best of both worlds. The smaller second display is the 14.1-inch ROG ScreenPad Plus, which offers up to 3840x110 resolution and when powered with ScreenXpert, you've got tweaking through control software that lets you tweak your apps and windows across both displays of the Zephyrus Duo 15 laptop.