We first heard whispers about Intel's upcoming codename "Panther Cove" CPU architecture over a year ago now, and just a couple of weeks after its first tease, we heard more leaks on Intel's upcoming "Royal Core Project" which is aiming to be an AMD Zen CPU killer. 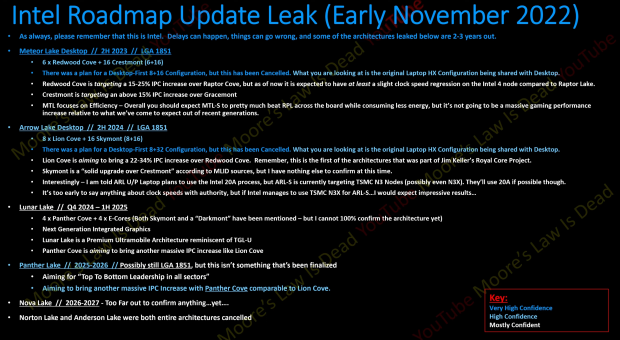 We don't know much about Panther Cove, but Moore's Law is Dead says his sources tease Intel is aiming for "top to bottom leadership in all sectors" and that it will have "another massive" IPC improvement with Panther Cove comparable to Lion Cove. Rewinding that Intel CPU clock, we've just seen the new 13th Gen Core "Raptor Lake" CPU launch... after that, we'll have 14th Gen Core "Meteor Lake" in 2023, then 15th Gen Core "Arrow Lake" in 2024, 16th Gen Core "Lunar Lake" in very late 2024 or 2025, followed by 17th Gen Core "Panther Lake" in 2025-2026.

After the release of the 17th Gen Core "Panther Lake" CPU, we'll have the 18th Gen Core "Nova Lake" CPUs that will drop in 2026-2027... but I would hope Intel will change the "Core" branding to something else if this new Royal Core Project is as big as Intel is hoping it'll be.

Moore's Law is Dead also confirms that Intel was reportedly working on the Norton Lake and Anderson Lake CPU architectures, but both of these architectures were canceled.

The reason behind the huge IPC improvements that we're expecting to get from Intel's next-gen Panther Lake is that the father of AMD's revolutionary Zen CPU architecture -- Jim Keller, who has worked for the likes of AMD, Apple, Tesla, Intel, and others -- moved over to Intel to work on their "AMD killer" aka the Royal Core Project.