Intel's next-gen Xeon "Granite Rapids" CPUs have been detailed in some new leaks from Moore's Law is Dead, where we're now expecting up to 128 cores from Granite Rapids... and that's a big deal.

If we see next-gen Intel Xeon "Granite Rapids" processors with 128 cores, this will be the biggest jump in Intel enterprise technology in over 10 years, using the new Redwood Cove+ CPU architecture. The updated Redwood Cove+ architecture isn't a huge jump over Redwood, made on the new Intel 3 process node, and should drop sometime in 2024. 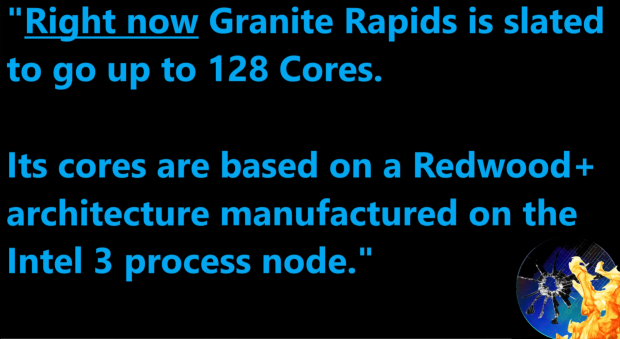 MLID says that the new Xeon "Granite Rapids" and its new Redwood+ architecture should have a "bigger uplift" over Redwood Cove than Raptor Cove was over Golden Cove. Intel's new Redwood+ is a bigger architectural shift than Raptor Lake is bringing over Alder Lake, adds MLID.

Intel reaching 128 cores based on the Redwood+ architecture on its next-gen Xeon "Granite Rapids" is a major leap forward, but competitor AMD will be stretching its legs with EPYC "Turin" CPUs based on the Zen 5 architecture packing up to 256 cores and 512 threads while using 600W on the TSMC 3nm process node and dropping in 2024.

The next Xeon CPU from Intel will be the Xeon "Sapphire Rapids" platform that was meant to be here by now, but delay after delay after delay, and then a major delay that pushed it over a year out and into 2023. AMD isn't stopping with EPYC processor after EPYC processor, slowly cranking up the CPU core count where in 2023 we'll see AMD's new EPYC "Genoa-X" CPU with 96 cores and 192 threads of Zen 4-powered CPU power with AMD's nifty 3D V-Cache technology and a huge 1.1GB of L3 cache. 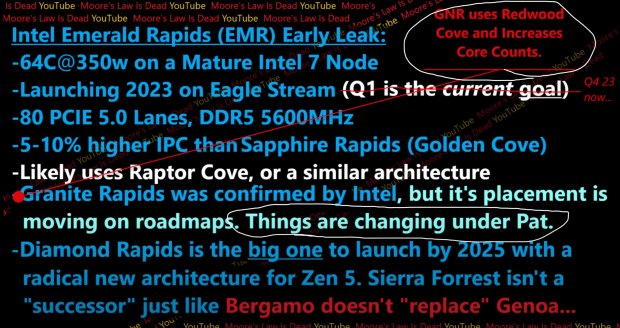 Intel's initial release plans for its next-gen Xeon "Granite Rapids" platform was reportedly aiming at 72 to 96 cores, but the jump to 128 cores -- which is roughly a 50% increase in CPU core count with Granite Rapids -- and then the improved Redwood+ architecture and the new Intel 3 process node. Intel's new Xeon "Granite Rapids" CPU looks to be the competitor to AMD's upcoming EPYC "Genoa" and "Genoa-X" CPUs.