Intel's new Arc A310 graphics card has just been teased on the official Intel website, with some specifications on Intel's new entry-level desktop Arc GPU.

The specifications for the Intel Arc A310 point to the entry-level GPU featuring 6 Xe-Cores clocked at either 2100MHz or 2000MHz -- as there's some conflicting information here -- with Intel making the Arc A310 graphics card on TSMC's N6 process node. 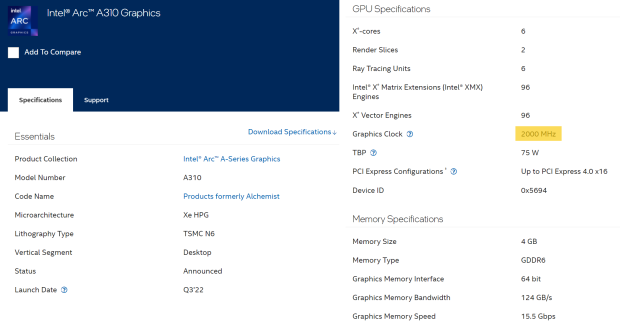 Intel's entry-level Arc A310 graphics car has 4GB of GDDR6 memory clocked at 15.5Gbps on a 64-bit memory bus, with up to 124GB/sec of memory bandwidth and a 75W TDP. Intel's own website says that the Arc A310 launches in Q3 2022, meaning we only have a couple of days left for that to happen or someone is going to have to go in and ninja-edit that entry.

We should expect Intel's new Arc A310 to be in a low-profile form factor, where we've previously seen a pre-production Intel Arc A310 graphics card back in July. It was a tiny little card with a dual-fan cooler and what looks to be a single-slot design, and even now we still don't know when it will be launching... given the Q3 2022 launch on Intel's own website.

Later in the month of July 2022, we saw MSI teasing its new gaming PCs with an "Intel Arc A310 LP" graphics card, with more on that above.