The news is coming from leaker "9550Pro" on Twitter, who simply teased "almost 4GHz GPU" in a new tweet with AMD CEO Dr. Lisa SU in the background when AMD teased its upcoming Radeon RX 7000 series "RDNA 3" graphics card recently. If we consider that AMD's current-gen RDNA 2-based GPUs can reach almost 3.0GHz and sometimes over depending on the GPU, the huge bump up to almost 4.0GHz would be incredible. 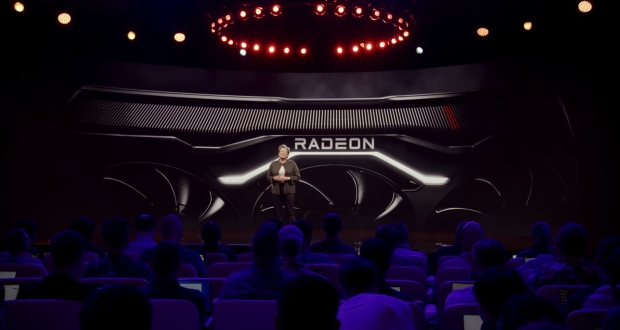 NVIDIA's flagship GPUs aren't pushing that, with the GeForce RTX 3090 Ti hitting 2000MHz or so and tapping out, the next-gen GeForce RTX 40 series "Ada Lovelace" GPUs are expected to get much closer to 3.0GHz, while the flagship AD102-based GeForce RTX 4090 is expected to reach 2520MHz boost GPU clock for 450W... and up to 660W when overclocked.

The news of Navi 3X being clocked so high isn't new, as I reported on that on September 15 what leaker Moore's Law is Dead having a source tell him that AIBs are going to "clock Navi 31 to the moon". AMD will reportedly be tame with GPU clocks to keep temps and noise under control with its next-gen Radeon RX 7900 XT, in what would be a very cool move against NVIDIA to have them be dubbed the "hot and loud (graphics card) company".

4GHz would be the holy grail of GPU clocks as we haven't been there before out of the box, 3GHz was hit with RDNA 2 without much fan fare (maybe because it wasn't NVIDIA doing it). But... if AMD can strike with these statements of AIBs having the ability to clock Navi 31 to the moon, means we should be in for some truly exciting reveals from Team Red for RDNA 3.

Especially if the 450W power numbers on the flagship Radeon RX 7900 XT are right, because NVIDIA is kicking things off at 450W and ramping up to 660W+ and beyond with "OC" mode on its flagship AD102-based GeForce RTX 4090 graphics card.

Both are expected to roll out with 24GB of VRAM, with AMD using GDDR6 on its Radeon RX 7900 XT while NVIDIA taps the faster GDDR6X memory on its GeForce RTX 4090 graphics card. 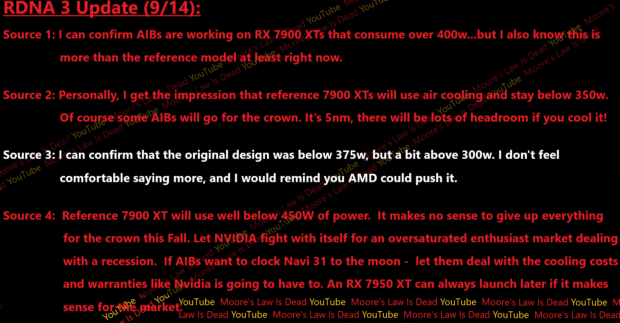 If AMD can reach almost 4.0GHz on one of its next-gen RDNA 3 chips, we could expect 3.2GHz to 3.5GHz and beyond for its flagship Navi 31-based Radeon RX 7900 XT graphics card. AMD has been slowly ramping up clock speeds across the board, with 5.8