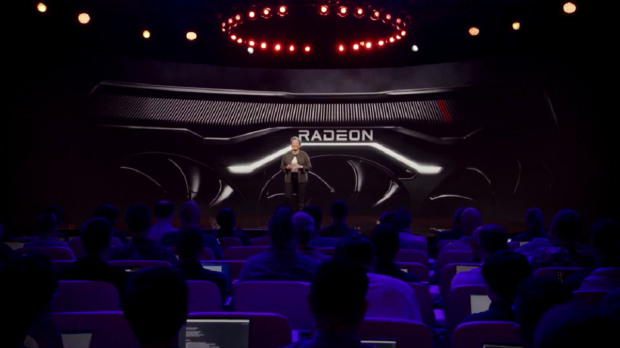 The next-gen Radeon RX 7900 XT reference design from AMD is continuing with its black color scheme, which is something AMD leaned into a little heavier with its suped-up Navi 21-based Radeon RX 6950 XT graphics card. AMD CEO Dr. Lisa Su said during the live stream that performance on the new RDNA 3-powered Radeon RX 7000 series GPU looks "absolutely wonderful".

But from this quick look of the next-gen Radeon RX series graphics card and its power connectors not shown, I would say they're going to be using dual 8-pin PCIe power connectors. It would be real nice for AMD to have it all: next-gen Zen 4 CPU on 5nm, next-gen X670 + B650 motherboards with DDR5 and PCIe 5.0 support with the new AM5 socket, and a next-gen RDNA 3-based Radeon RX 7000 series GPU with PCIe 5.0 x16 support.

A super-fast next-gen PCIe 5.0 SSD + PCIe 5.0 GPU inside of a new Zen 4-based Radeon RX 7950 XT processor would be truly awesome, matched with a big new 4K 120Hz+ OLED gaming monitor or TV and you've got a why-isn't-there-a-next-gen-Crysis to play on your new silicon.

Lisa also underlined that the next-gen RDNA 3 GPU architecture will have a 50% performance per watt improvement over the current-gen RDNA 2 GPU architecture. Lisa then showed off AMD's just-announced Ryzen 9 7950X processor with its 16 cores and 32 threads of Zen 4 power at 5.7GHz running alongside the Radeon RX 7000 series GPU in 4K, running Lies of P.