AMD's upcoming Radeon RX 7900 XT reference graphics card might be a monster in terms of performance, but it could be a tame kitten when it comes to power consumption compared to NVIDIA.

The new RDNA 3-powered Navi 31-based Radeon RX 7900 XT should battle NVIDIA's upcoming Ada Lovelace-powered GeForce RTX 4080 16GB graphics card at the very least, and could possibly battle it out with the flagship GeForce RTX 4090. But... here's the kicker: at much, much less power.

In his new video, Tom over at Moore's Law is Dead says he's chatted with a few sources confirming some of the recent rumors (including my exclusive: NVIDIA has had GeForce RTX 40 series GPUs ready in warehouses in Taiwan since August) in the RTX 4080 16GB + RTX 4080 12GB as well as some new information on AMD's upcoming Radeon RX 7900 XT.

Tom continued, that if AIBs want to clock Navi 31 to the moon -- and some of them are -- it's up to the AIBs to deal with the cooling costs (clocking the GPU higher will use more power, more power = more heat, more heat = more cooling required) as well as the warranty issues (which AIBs deal with, not AMD) if they arise. 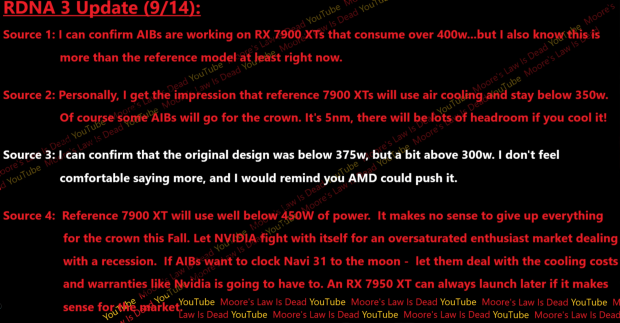 "AMD doesn't want to deal with it, they don't have the money to deal with it, and they don't want to be known for having hot cards. AMD has an opportunity this fall, because of the expensive graphics cards coming -- in the middle of a recession, and a market that's flooded with now much cheaper GPUs and soon a lot of second-hand mining GPUs -- and in the middle of that "NVIDIA is just going for it" with expensive Ada Lovelace graphics cards".

"Here's our chance for AMD to make NVIDIA the "hot and loud company" moving forward... people already think of Ampere as 'hot and loud'".

"Let's let them double down. They can be known as the company that uses too much energy, finally, maybe we can get some of that stigma removed from the Radeon brand. At the end of the day, any extra overclocking we do is going to add to board cost, make it harder to sell for a reasonable amount -- and as it's being leaked Angstronomics specifically - it's not as big of a card as you might think, so they can probably charge a lot less if they don't go buck wild".

"AMD could possibly overclock the Radeon RX 7900 XT, but it appears they might play it a bit tamer this generation, given how extreme their competition -- AD102 and the GeForce RTX 4090 with up to 660W+ of power consumption -- and allow AIB partners to pump out heavily overclocked Radeon RX 7900 XT graphics cards that push higher into that 400W+ power.

The first source told MLID that they can confirm AIBs are working on custom Radeon RX 7900 XT graphics cards that consume over 400W, adding that they know this is more than the reference model uses "at least right now". MLID's second source said that they get the impressive that AMD's in-house reference RX 7900 XT graphics card will use air cooling, and stay below 350W. This source added that AIBs will "go for the crown" because it's 5nm there will "be lots of headroom if you cool it!"

MLID's third source said that they can confirm the original design -- of the RX 7900 XT -- was below 375W "but a bit above 300W". This source did add that they didn't "feel comfortable saying more, and I would remind you AMD could push it".

The final source said that AMD's reference Radeon RX 7900 XT graphics card would "use well below 450W of power" and that it "makes no sense to give up everything for the crown this Fall". The fourth source told MLID that AMD should "let NVIDIA fight with itself for an oversaturated enthusiast market dealing with a recession".

The source a added that if AIBs wanted to "clock Navi 31 to the moon" then "let them deal with cooling costs and warranties like NVIDIA is going to have to", finalizing his comments to MLID that "an RX 7950 XT can always launch later if it makes sense for the market".