A new report from Angstronomics says that AMD's next-gen RDNA 3-based Navi 3X GPUs were finished in 2019, finalized sometime in 2020, and have had "no changes since". 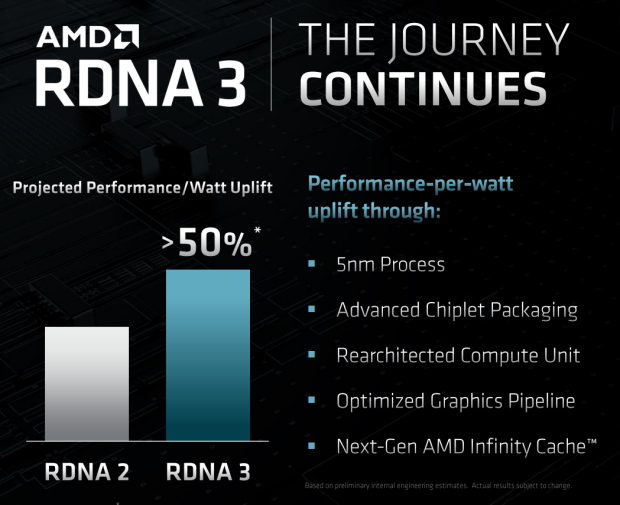 AMD's upcoming Navi 31 is the flagship GPU based on the RDNA 3 graphics architecture, which will reportedly feature 1 x GCD (Graphics Chiplet Die) and 6 x MCDs (Memory Chiplet Dies). Each of them will contain 16MB of Infinity Cache, joined by GDDR6 memory and 64-bit wide PHYs according to the report. Navi 31 is expected to rock out with 48 WGPs (Work Group Processors) and a 384-bit memory bus using GDDR6 memory.

Angstronomics continues, saying that Navi 31 features an organic fanout layer with a 35-micron bump pitch, which is the densest available in the industry. AMD will be using a 3D stacked MCD that's being made on 1-hi using TSMC's SoIC (System-on-Integrated-Chips) which is the process of stacking multiple chips using chip-on-wafer bonding process.

AMD is expected to make the GCD on TSMC 6nm process node, while the MCD will be made on TSMC 6nm, which is something that has been in the rumor mill for a while now.

We are expecting AMD to roll out its new Navi 31 flagship GPU with PCIe 5.0 x16 support, ready for AMD's upcoming Ryzen 7000 series "Zen 4" processors and new X670E + X670 motherboards that will have both DDR5 and PCIe 5.0 technology support. AMD will have a PCIe 5.0 x16 graphics card, with a PCIe 5.0-ready chipset, all later this year.

The post teases that AMD's upcoming Navi 31-based reference graphics card -- which should be the Radeon RX 7900 XT -- will have an "updated 3-fan design that is slightly taller than the previous generation". The iconic 3 red stripe accent on the section of the heat sink fins will be next to the dual 8-pin power connectors.