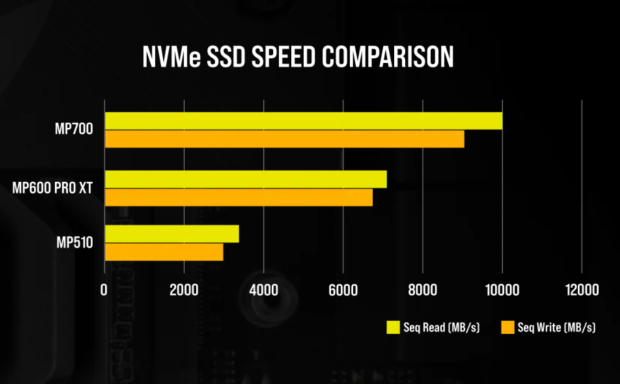 On the official Corsair website, the company compares its next-gen MP700 PCIe 5.0 SSD up against the MP600 Pro XT and older-gen MP510 SSDs. Corsair's MP600 Pro XT is pushing out 6.5GB/sec or so in both reads and writes with its Gen4 x4 connectivity, while the Corsair MP510 SSD is pushing the regular 3.5GB/sec reads or so. The new Corsair MP700 with its 10GB/sec+ reads and 9.5GB/sec+ writes give you a world to rock and roll for next-gen PC storage speeds.

Corsair hasn't fully detailed its next-gen MP700 PCIe 5.0 SSD, where we just have a benchmark chart... not even a photo, or a render, of the MP700 SSD itself. The company already has quite a family of DDR5 memory, PSUs that will handle your graphics cards and new Intel 13th Gen Core "Raptor Lake" CPUs and Z790 motherboards, as well as AMD's soon-to-be-released Ryzen 7000 series "Zen 4" processors. 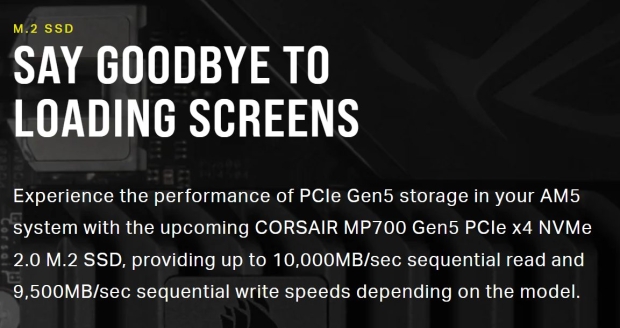 Interestingly, Corsair doesn't note that their new MP700 SSDs will bust over 10GB/sec on an Intel platform... as Corsair themselves says "experience the performance of PCIe Gen5 storage in your AM5 system with the upcoming Corsair MP700 Gen5 PCIe x4 NVMe 2.0 SSD". 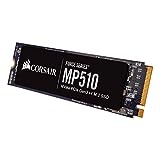