Better yet, the Cockpit Mode is accompanied by Eclipse Lighting: with the full control of your gaming cockpit at your fingertips on the Samsung 55-inch Odyssey Ark. You can rotate the screen to Cockpit Mode with HAS, tilt, and pivot functionality for an optimal screen environment. This customizable positioning creates a new sense of world-blending immersion, further enhanced by ambient Eclipse Lighting. 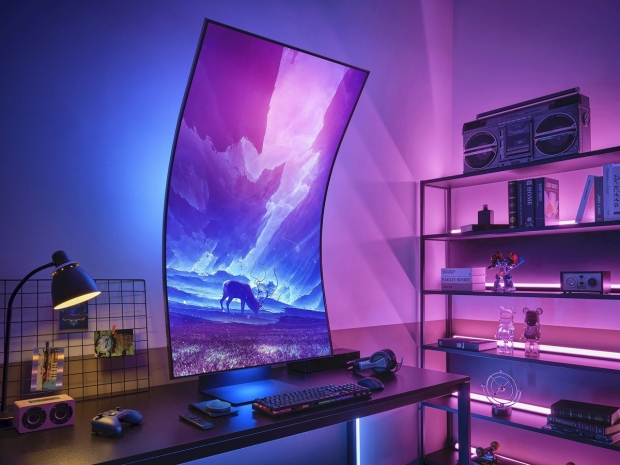 It's not just visuals that Samsung is taking care of with the Odyssey Ark, but audio as well with 4 corner speakers and 2 central woofers to provide 60W 2.2.2 channel with the lowest 45Hz notes of any gaming screen or sound bar. Samsung packs in an AI Sound Booster and Dolby Atmos that "take it to the next level" surrounding you with three-dimensional soundscape that teleports you into the gaming world.

I personally use a 77-inch LG OLED 4K 120Hz display for my daily driver -- but I have it on a mobile TV stand on wheels, allowing me to move it around and tweak it to my exact personal liking -- running Windows on my PC with 125-150% DPI scaling. It looks and feels fantastic, but I'm a huge fan of portrait mode on displays... especially when there are multiple in front of me. Samsung's new 55-inch Odyssey Ark 4K 165Hz has the ability to be moved into portrait mode... a couple of these side-by-side would be something else.

Samsung provides you with not one, but two remote controls that are both solar-powered. The first remote is like your traditional TV remote control, giving you the usual basic functions and buttons. Samsung's other control is called the Ark dial, with a standalone command center that provides you with the main functions of Ark: power, volume, input select, and the game bar -- all with big buttons.

There's a rotatable dial with a directional pad, which is weird to see on a display or TV remote, helping make the Samsung 55-inch Odyssey Ark gaming screen stand out once more.

On the back, the Samsung Odyssey Ark features 4 x HDMI 2.1 ports but lacks a DisplayPort connector... nice gaming screen that's not a gaming TV, Samsung. Inside, Samsung is using quantum Mini-LED backlighting that offers a blistering 1500 nits of peak brightness, as well as Samsung has the ability of bragging rights: the first 55-inch 4K panel with a blistering165Hz refresh rate.

Samsung's new Odyssey Ark gaming screen costs $3500, and it's quite the price upgrade over something like the 55-inch 4K 120Hz OLED that Samsung sells for nearly half that cost at $1799.