In early June, Yellowstone National Park was devastated by torrential flooding that was so powerful it knocked out roads and homes and left individuals stranded.

Yellowstone is still recovering from the horrific natural disaster, and according to previous reports, the flooding came from the adjacent river, which caused the roads as well as some banks to erode and collapse into the rushing water. Notably, the park was closed due to the flooding, marking the first time in 34 years that officials were forced into closure. Furthermore, the flooding caused more than 10,000 visitors to exit the park as well as officials estimated that the damage caused by the flood water will likely take months to repair.

Now, Yellowstone has taken to its social channels to post a video that showcases the widespread flood damage that was caused, in particular to The Canyon and the North Entrance Road. According to the US Geological Survey, the immense volume of water is a "1 in 500-year event", which translates to just a 0.2% chance of a flood of this level occurring each year.

From both of the above videos, you can see from helicopter footage that the flooding has caused extreme damage to roads, footbridges, exits, entrances, and even homes. The National Weather Service stated that there were between 0.8 inches to more than 5 inches of rainfall, combined with 2 to 5 inches of snowmelt that caused the flooding.

As previously stated, the park was forced into closure following the flooding, and according to reports from Fox Weather, eighty-eight people had to be rescued by helicopter as they were unable to leave the park. Furthermore, the US Geological Survey's estimation of the recent flooding being a 1 in 500-year event doesn't mean that this level of flooding can't occur next year. 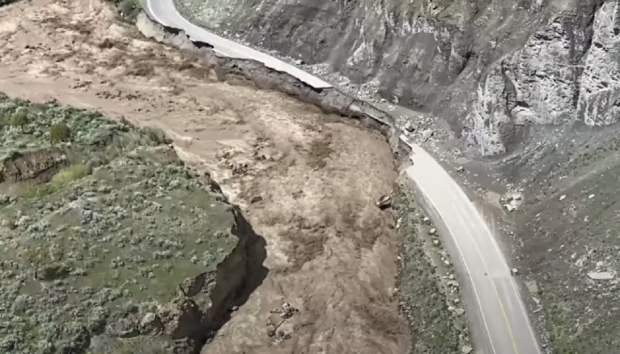