AMD's next-gen RDNA 3 GPU architecture isn't too far away now, with the flagship Navi 31 GPU rumored to roll out with a 350mm² graphics die... smaller than the current RDNA 2-based Navi 21 GPU. 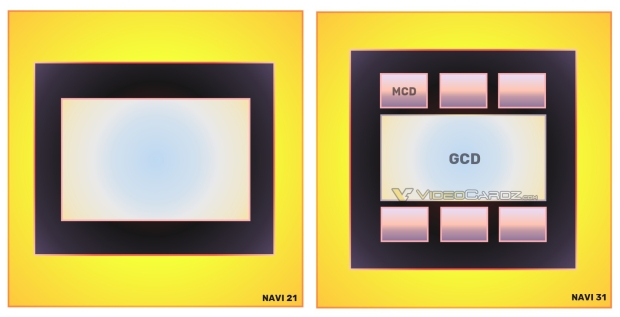 In a new tweet, leaker "Greymon55" says that the next-gen AMD Navi 31 GCD (Graphics Complex Die) comes in at a small 350mm², making it much smaller than the 520 mm² on the Navi 21 GPU. VideoCardz has a mock up of the Navi 21 GPU next to the Navi 31, where you can see the GCD in the middle with the MCD (Memory Complex Die) flanking the GCD.