If you have been keeping up with the news surrounding Webb, it's likely you have already seen the first set of colored images. However, there is one more image you may not have seen as it was published inside the JWST commissioning report, a document detailing all of the tests carried out on Webb's scientific instruments. The image shows Jupiter, and according to New Scientist, our solar system's biggest planet was a target for Webb's calibration to make sure the observatory was capable of tracking fast-moving objects. 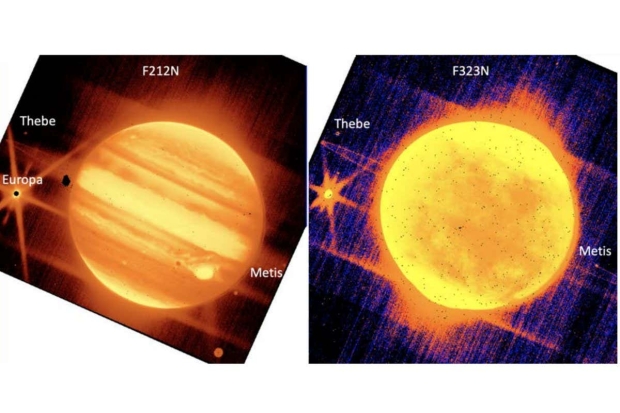 Webb was assigned to track nine moving objects, and the test was to see if the observatory was capable of tracking those objects when a planet was shooting light directly into the lens of the cameras. Webb passed the test, and by flying colors as the observatory proved it was capable of tracking fast-moving objects better than engineers expected. This feature of Webb will be particularly useful for researchers wanting to analyze comets or asteroids.

As for the Jupiter image, the space telescope captured the solar system's largest planet in two different filters. Each of these images showcases a different wavelength of light. Notably, NASA directed the observatory to focus on the "bright planet" and its satellite moons/rings. The report concluded that Webb was more than ready to take on scientific operations.