NASA's James Webb Space Telescope (JWST) is fired up for scientific operations, and the space agency has released a beautiful image of a star-forming region. 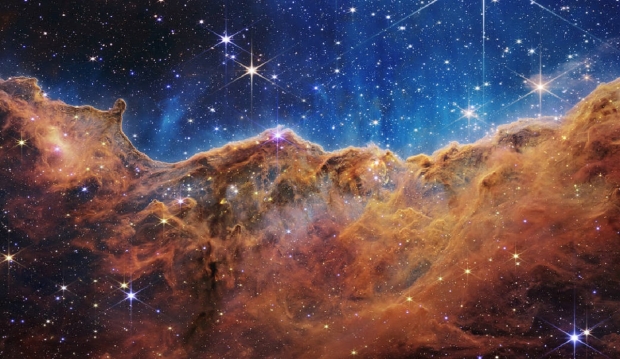 NASA has shared a new image snapped by the James Webb Space Telescope's infrared instrument that focuses on the star-forming region NGC 3324, or the Carina Nebula. According to NASA's recent blog post, the region is called the Cosmic Cliffs, and after looking at the image, you can understand why. The agency explains the space mountains consist of cosmic dust, but Webb's extremely sensitive instruments are capable of peering through that veil at the young stars behind it.

NASA notes that the ultraviolet radiation that is being released from the young stars is influencing the mountain's edge, while the mist that is seen above the mountain top is actually hot ionized gas and dust that is being forced away from the nebula by star radiation. Furthermore, the tallest "mountain" seen in the above image is estimated to be 7 light-years tall.