NVIDIA's new flagship GeForce RTX 4090 graphics card has a little more details from kopite7kimi, with the AD102-300-1 GPU clocking at over 2.75GHz. The leaker says that we can expect a 2235MHz base GPU clock, 2520MHz boost GPU clock, and 2750MHz "actual max" GPU clock. Impressive, very impressive... considering 2250MHz is about the limit for the GeForce RTX 3090 Ti outside of insane LN2 cooling and mods for days.

If we're expecting "actual max" GPU clocks of 2.75GHz then we could see custom GeForce RTX 4090 graphics cards from the likes of ASUS and MSI to reach 2.8GHz and above... while the heights of 3.0GHz+ on an NVIDIA GPU would be awesome to see.

The Ada Lovelace-based NVIDIA AD102-300-1 GPU would be joined by 24GB of GDDR6X memory clocked at 21Gbps, which is the same as the previous rumor. No change there with the ultra-fast GDDR6X memory, but some more information on the GPU clocks... the tease of 2.75GHz+ is very nice to hear. Exciting times... and 'just' 450W of power to do it. 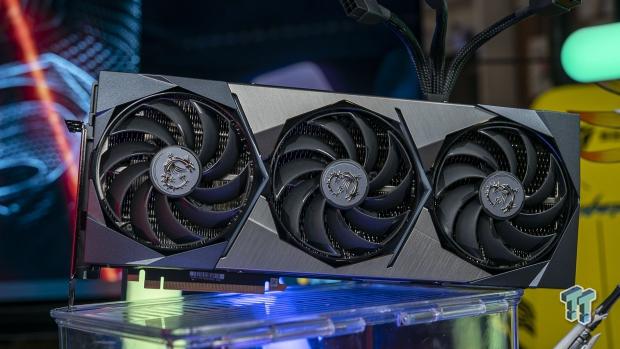 The last we heard about the chunky coolers for Ada Lovelace GPUs in the GeForce RTX 40 series family was also from Moore's Law is Dead, where his sources said that "AIBs are preparing 4.5-slot coolers right now for some undisclosed NVIDIA product. Already case-makers are adjusting their designs to support these monsters".

So if we have AD102-300-A1 GPUs ticking at over 2.75GHz and going north of 2.9GHz, those monster 4.5-slot designs make sense. NVIDIA is putting the pedal to the metal when it comes to Ada Lovelace GPU clocks in near-full-fat AD102-300 form... as it needs to compete against AMD's upcoming RDNA 3-based Navi 31-powered Radeon RX 7970 XT graphics card.