NVIDIA's next-gen GeForce RTX 40 series GPUs will be released this year, with the mosnter new flagship GeForce RTX 4090 / RTX 4090 Ti shaping up to be quite the gigantic beast.

In recent leaks, we've seen the gargantuan cooling system that the purported GeForce RTX 4090 Ti Founders Edition would use: what looks like a 4-slot cooler. But in his latest video, Tom @ Moore's Law is Dead said that he's been talking with AIBs who said:

"AIBs are preparing 4.5-slot coolers right now for some undisclosed NVIDIA product. Already case-makers are adjusting their designs to support these monsters".

I mean, the new flagship GeForce RTX 3090 Ti custom GPUs are already gigantic... with AIBs getting to test out higher-end 450-600W+ cooling designs ready for NVIDIA's next-gen Ada Lovelace GPU architecture. So a larger, 4-slot and 4.5-slot design shouldn't surprise us... NVIDIA needs to keep the heat off the GPU + GDDR6X + VRMs as much as possible.

AMD on the other hand is going to win efficiency with its RDNA 3-based Radeon RX 7000 series GPUs, in the new flagship Navi 31 GPU. AMD's next-gen Navi 31 is rumored to be an MCD/MCM (multi-chip die or multi-chip module) GPU that should power the flagship Radeon RX 7900/7950/7970 XT graphics cards. 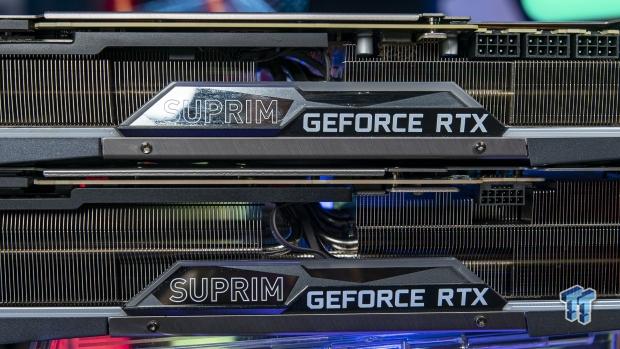