The collective net worth of the three billionaires has dropped significantly since the start of the year. 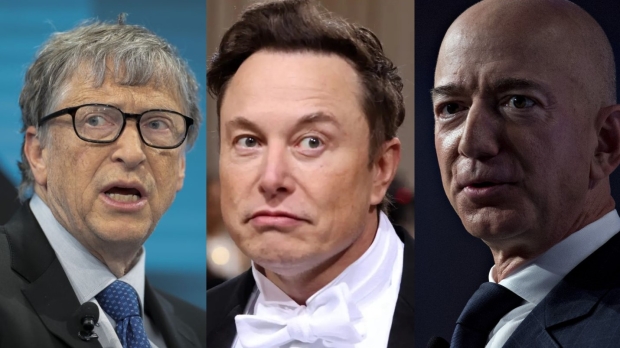 According to the Bloomberg Billionaires Index, the year-to-date (YTD) change in Elon Musk's net worth is a $46.4 billion drop, Jeff Bezos' net worth has dropped by $53.2 billion in the same period, and Bill Gates' has dropped by $15.1 billion. Mark Zuckerberg, another Big Tech billionaire, has lost $53.4 billion so far this year, almost half of his net worth.

As of May 31st, Musk's net worth sits at $224 billion, Jeff Bezos' at $139 billion, and Bill Gates' at $123 billion, ranking them at first, second, and fourth on the list of the world's richest people. Slotting in at third place is Bernard Arnault, with a net worth of $133 billion, the only person in the top six of the list to not come from the United States, instead hailing from France. Arnault's net worth has also dropped significantly, by $44.7 billion.

Tesla's stock price is currently down 36.69% so far this year, lessening the value of Musk's 15.6% stake in the company. Similarly, Amazon's stock prices decreasing by 32.43% has devalued Bezos' approximately 50 million shares in the company. Gates, however, has resisted a more significant falloff in net worth thanks to a more diversified portfolio, such as through the Bill and Melinda Gates Foundation.

Bill Gates: How to Avoid a Climate Disaster