A study on the magnetic reversal titled "A radio, optical, UV and X-ray view of the enigmatic changing look Active Galactic Nucleus 1ES~1927+654 from its pre- to post-flare states" has been accepted for publication in The Astrophysical Journal. 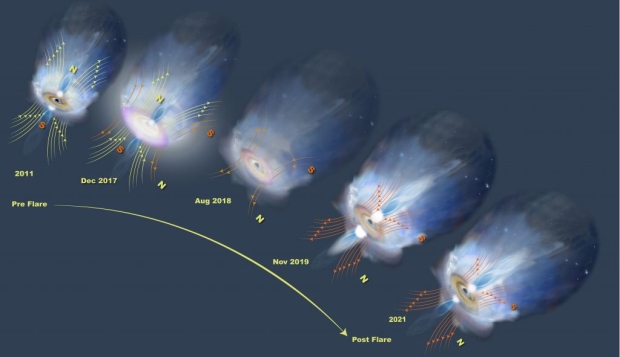 Researchers observed a rare, enigmatic outburst from the 1ES 1927+654 galaxy 236 million light-years away. The unusual characteristics of the eruption indicate that it may have been produced as a result of a magnetic reversal, where the magnetic field surrounding the central black hole of the galaxy spontaneously flips.

The eruption began near the end of 2017 and, by March 2018, had caused the galaxy's visible light to brighten by nearly 100 times. NASA's Neil Gehrels Swift Observatory noticed UV emissions were 12 times higher than normal in May 2018 and declining, indicating an earlier, unobserved peak. In June 2018, higher-energy X-ray emissions disappeared from the galaxy.

The Milky Way and other large galaxies tend to host a supermassive black hole at their center. With mass millions to billions of times greater than our Sun's, matter falls towards them, collecting in an accretion disk that slowly swirls the matter inward. As it circles inward, the matter heats up and emits light in the visible, ultraviolet, and X-ray portions of the electromagnetic spectrum.

"A magnetic reversal, where the north pole becomes south and vice versa, seems to best fit the observations. The field initially weakens at the outskirts of the accretion disk, leading to greater heating and brightening in visible and UV light," explained study co-author Mitchell Begelman, a professor in the department of astrophysical and planetary sciences at the University of Colorado Boulder.

"Rapid changes in visible and ultraviolet light have been seen in a few dozen galaxies similar to this one. But this event marks the first time we've seen X-rays dropping out completely while the other wavelengths brighten," said Sibasish Laha, a research scientist at the University of Maryland, Baltimore County, and NASA's Goddard Space Flight Center in Greenbelt, Maryland. 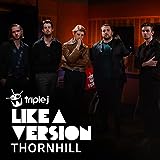