AMD's nifty new Ryzen 7 5800X3D processor is now here, with its next-gen layer of 3D V-Cache on top -- but because of that -- it's not overclockable. 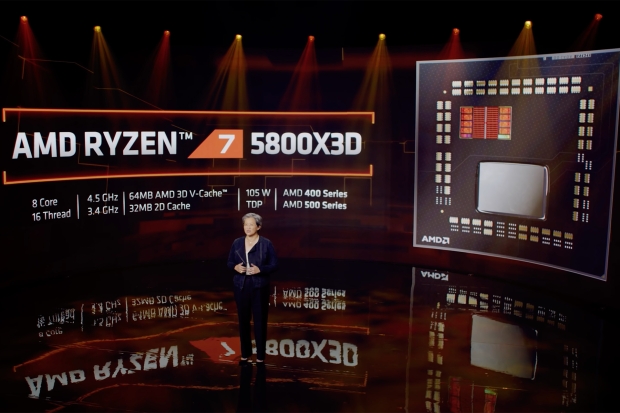 The news is coming directly from the horses mouth, with AMD's Director of Technical Marketing, Robert Hallock, confirming that there's no overclocking the Ryzen 7 5800X3D processor because of a few reasons. First, the CPU voltage does not scale past 1.35V, and AMD has said it hasn't had time to test the large 64MB of AMD 3D V-Cache on top of the 8-core chiplet with overclocking, and instead has dumped it out without testing (and just disabling OC because of it).

I guess we'll get a refreshed CPU in the future with 3D V-Cache that will be overclockable, because AMD will have time to tune the CPU for overclocking. The stack of L3 cache through AMD 3D V-Cache is impressive, and very cool from a technological achievement perspective, too. We have the same 8-core, 16-thread CPU but slower clocks than the Ryzen 7 5800X (non 3D V-Cache) at 200MHz slower, but the 3D V-Cache provides up to 15% more performance and bringing it up to the level of the Ryzen 9 5900X.