The astronaut behind the famous gorilla video on the International Space Station explained how his first attempt smuggle attempt didn't go as planned.

Even in space, humans perform practical jokes on each other, and sometimes that means smuggling different items onto the International Space Station (ISS). Futurism reports that many different items have been smuggled onto the ISS throughout its operational time. Items such as alcohol, cigarettes, and even cremated remains on a famous Star Trek actor. Another item that was once smuggled onto the floating laboratory was a gorilla suit, but the astronaut that was trying to get it on the ISS didn't get it there on his first attempt.

In an interview with People, NASA astronaut Scott Kelly explained that his identical brother Mark Kelly, a retired NASA astronaut, attempted to send his brother Scott, who was on the ISS, a gorilla suit in 2015. However, that suit ended up being destroyed in a massive explosion when a SpaceX Falcon 9 didn't quite make it to the floating lab. Mark didn't give up there. "The next time I was on the phone with my brother, he goes, 'I'm sending you another gorilla suit,'" Scott told People.

Scott explained in the interview that the video that has since been a viral sensation is all "staged". NASA astronaut Peake seen in the video being chased by the gorilla, was aware of the suit, but all of the other astronauts aboard the station weren't.

"I floated down to the Russian segment. When they saw it, they were just laughing like you wouldn't believe. It was the end of my year in space. So you need a little humor," Scott added. 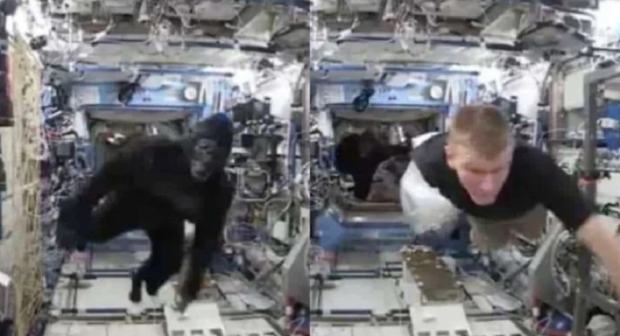