A trend analysis report from NewsBitcoin suggests that Bitcoin's price has stabilized and is ready for a steady increase. 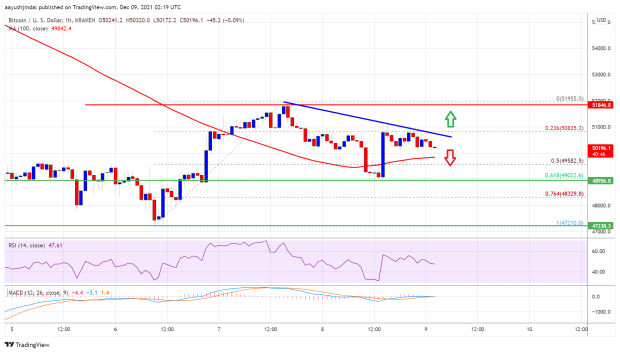 The report outlines that Bitcoin made a sharp dip down to $49,000 but was quickly scooped up by buyers that pushed the price to above $49,500, according to the 100-hour simple moving average. BTC has a fight ahead to increase value, with its next key resistance being close to the $50,400 level and the following resistance being at $50,500 (on the 1-hour chart).

According to the report, breaking through the aforementioned resistance levels and reaching a price of $52,000 may result in a sharp price increase. If Bitcoin can't rally and more sell-offs occur, the price could see a sharp decline down to the $49,000 support, and if that doesn't hold, then the price may slump down to the $47,200 level.