Phison teased its next-gen E26 SSD controller but now we know all about the E26 controller, which will be offered to both high-end consumer and gaming PCs as well as enterprise level systems. 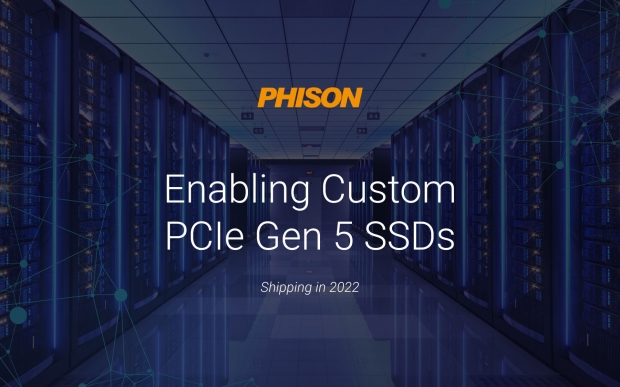 Phison's new E26 controller has Arm Cortex-A5 cores as well as special-purpose accelerators inside of the in-house CoXProcessor 2.0, while Phison will have its E26 as a customizable SSD platform that can be made in different form factors: M.2, U.3, E1.S, and E3.S form factors.

What Phison does special here with the E26 SSD controller is that the company makes more of the critical intellectual property (IP) blocks inside of the controller than any other company, something that Phison says "thereby eliminating dependencies and inconsistencies that competitors have when they source 3rd party IP for their controllers. Second, that the E26 controller IP is developed concurrently with Phison's firmware in a FPGA environment, even before tape out ensuring a fast time to market with the highest reliability at introduction".

The company is making its E26 Gen 5 test chip on the 12nm advanced process, while Phison expects to see its E26 PCIe 5.0 SSD controller inside of customized SSD solutions in the second half of 2022. The company is currently handing out E26 Gen 5 SSD samples to motherboard manufacturers, so that their engineers can "tune their electrical signal link-ups, command timing, and BIOS to Phison's Gen 5 SSD controllers and firmware".

Phison's new PCIe 5.0-capable E26 SSD controller will be the controller that powers next-gen PCIe 5.0 NVMe M.2 SSDs in 2022 and beyond, which will mean you'll need the new PCIe 5.0 standard. PCIe 5.0 will be launching with Intel's new 12th Gen "Alder Lake" CPU platform, along with DDR5 memory.

PCIe 4.0 first launched with AMD and its Ryzen CPU platform, taking Intel a while to catch up -- but not long after Intel now has the exclusive on PCIe 5.0 and DDR5 for the next year or so. Phison won't have PCIe 5.0 SSD controllers out for another year, so once PCIe 5.0 is here for another Intel CPU generation and AMD CPU generation, Phison's new E26 SSD controller will be ready.

Jeff Janukowicz, Research Vice President at IDC says: "While PCIe Gen 4 SSD shipments are still ramping up, there are many server and storage customers who will want to transition to PCIe Gen 5 as soon as that technology is available. By helping to enable an ecosystem, Phison's customizable E26 SSD is at the forefront of PCIe Gen 5 introductions and will facilitate data center customers looking to benefit from the technology's increased performance".