Microsoft already has 2 next-generation consoles on the market with the Xbox Series S and Xbox Series X consoles, but the company is reportedly working on a few refreshed consoles including a suped-up Xbox Series S console. 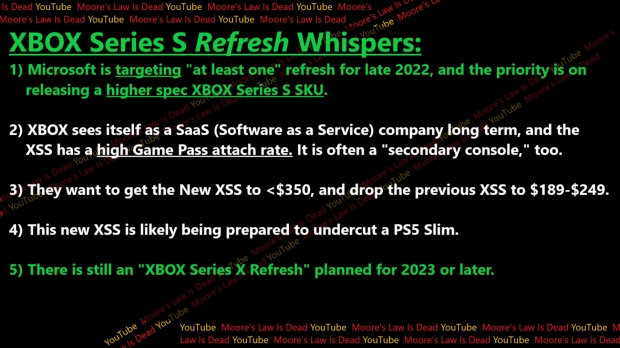 The new Xbox Series S would feature over 20 Compute Units (CUs) as the current XSS console has 20 CUs with as many as 4 disabled. Microsoft and AMD are doing this to boost yields, and have a good supply of Xbox Series S hitting the shelves. But more CUs and higher clock speeds could see the suped-up Xbox Series S being up to 50% faster, and that is a huge deal.

On top of that we're to expect a much beefier enthusiast class console with a suped-up "Xbox Series X Refresh" console planned for sometime in "2023 or later". This would compete with Sony's beefed-up PlayStation 5 Pro that was teased in the same video.