Intel is doing some much-needed changes to its node naming scheme, shifting away from its just-introduced 10nm Enhanced SuperFin nomenclature with the introduction of Intel 7. 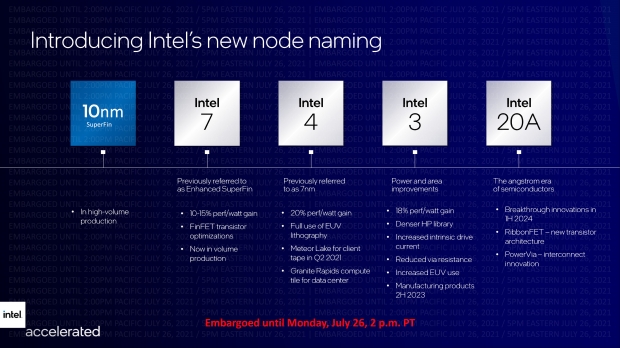 Intel 7 was previously referred to as Enhanced SuperFin, and will have 10-15% performance-per-watt improvements, FinFET transistor optimizations, and is currently in volume production. The new Intel 7 node will arrive with consumer-focused 12th Gen "Alder Lake" CPUs as well as data center-bound Sapphire Rapids CPUs. 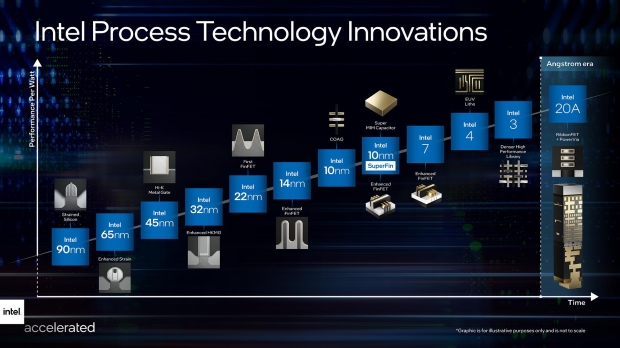 After the introduction of Intel 7 later this year, Intel 4 is what the company used to call its 7nm node -- we're to expect a 20% performance-per-watt improvement, with "full use of EUV lithography", and will find its way into the next-gen 13th Gen "Meteor Lake" CPUs for consumers and then the Granite Rapids compute tiles for the data center.

Intel 3 is the next one after that, with 18% performance-per-watt improvement over Intel 4 as well as Denser HP library, increased intrinsic drive current, reduced through resistance, increased EUV use, with CPUs using the Intel 3 node dropping in the second half of 2023.

Intel is aiming for the stars with its truly next-gen Intel 20A node, but what the hell is the Intel 20A node? Intel 7, Intel 4, Intel 3 makes sense... 7nm, 4nm, 3nm... but Intel 20A? Intel's new 20A is 2nm with truly next-gen RibbonFET transistors, replacing the FinFET architecture with totally new interconnect innovations -- Intel teased one of those: PowerVia. 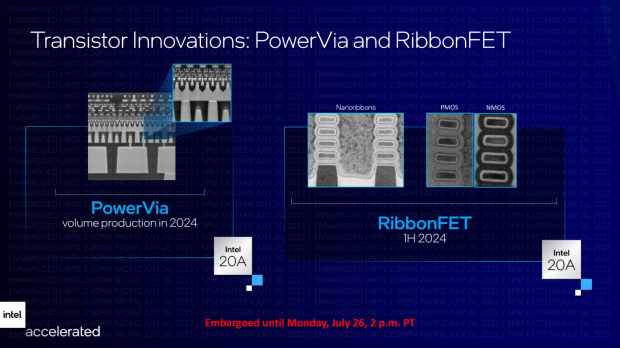 The company will be shifting into volume production of PowerVia in 2024, while RibbonFET starts its life in 1H 2024. 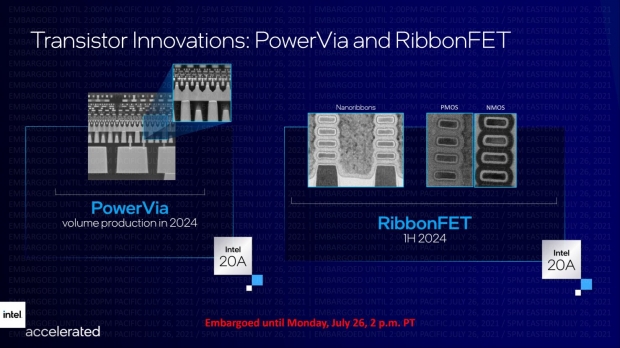 After that, we have the introduction of Intel 18A -- which is "in development for early 2025" says Intel.