AMD's next-gen Zen 4 "Raphael" LGA1718 package has been teased, this time through a new mockup that will eventually be what we'll see as the Ryzen 7000 series CPUs.

The new Raphael CPUs will reportedly have a flagship 170W TDP model, but for the most part will be 120W TDP designs. AMD will have DDR5 support with its new AM5-based motherboards, meanwhile, Intel will support DDR5 on its higher-end boards, but will offer DDR4 support on other Intel 600-series chipsets.

Zen 4 will have 28 PCIe 4.0 lanes on offer, an upgrade over the 24 PCIe 4.0 lanes on the Zen 3 series. Intel will have next-gen PCIe 5.0 connectivity on its upcoming 12th Gen Core "Alder Lake-S" processors, which will be directly battling against AMD's new Zen 4 "Raphael" CPUs. 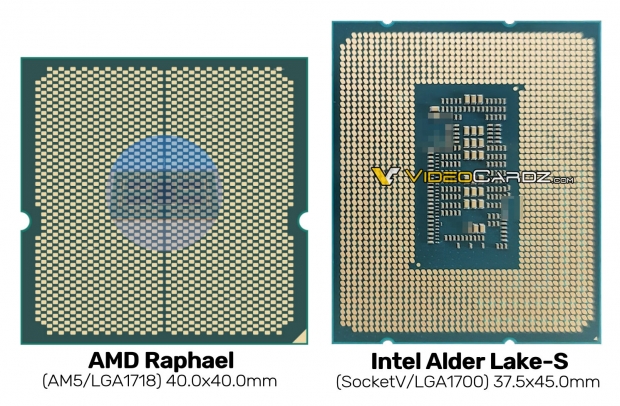 The layout of the next-gen Raphael CPUs seems to have changed, as there are most likely more compute dies on the package, so the package (AM4 to AM5) has to change. We should see the Zen 4 architecture powering not just the Ryzen 7000 series desktop CPUs, but also the next-gen Genoa (EPYC) and Phoenix (APU) processors in 2022.