All NewsBusiness, Financial & LegalCases, Cooling & PSUContests & GiveawaysCPU, APU & ChipsetsDealsDisplays & ProjectorsGamingMotherboardsScience, Space & RoboticsStorageVideo CardsVirtual & Augmented Reality
All ReviewsAll ArticlesAudio, Sound & SpeakersCases, Cooling & PSUCPUs, Chipsets & SoCsComputer SystemsDisplays & ProjectorsGamingMotherboardsNetworkingPeripheralsStorageVideo Cards
GuidesGamingAsk the ExpertsNewsletterAboutForums
Chia Coin MiningRTX 3090RTX 3080RTX 3070HDMI 2.1Bitcoin MiningBattlefield 6
At a recent visit to Gigabyte's offices in Taipei, we got some info about its upcoming RD790 board, the GA-M790-DQ6. This was a Rev. 0.2 board, so some changes might still happen before it goes into production. We've already reported about this board back at Computex in June and you can see that some changes has been made since then.

Sadly, Gigabyte had decided to remove the FireWire 800 support, but this seems to be the only disappointing change. The heatpipe cooling system has been changed to what looks to be a better version with two instead of one heatpipes and some other modifications. As you can see from the rear panel, it's missing a parallel port all together in favour for two rear mounted eSATA ports. 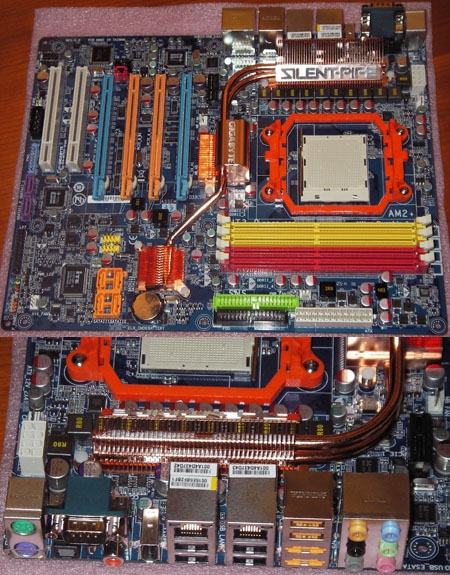 However, if you still need a parallel port, don't sweat, as Gigabyte has added an internal connector for it and supplies one with a long cable in the box with the board. Gigabyte has also changed the way it puts the power regulation on the board, compared to earlier boards and as you can see from the picture, it's now all in a straight line which makes it easier to produce an efficient cooling solution.

The GA-M790-DQ6 features the AMD RD790 chipset and it supports HyperTransport 3.0 and AM2+ CPU's, although Gigabyte could only tell us that the board will be available when AMD launches the chipset, which is most likely going to co-inside with the CPU launch.