New court documents filed by Apple reveal the Epic Games Store has yet to turn a profit, and the Fortnite titan could lose over half a billion dollars in total storefront investments by 2021. 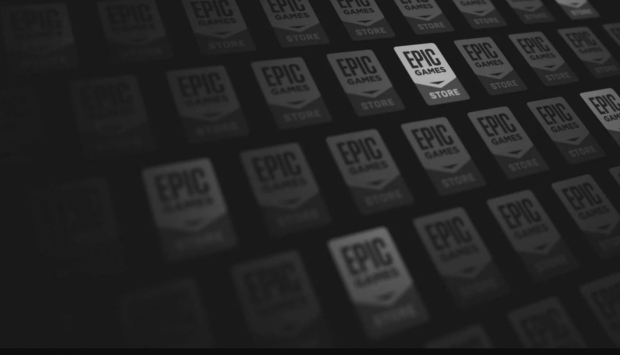 According to Apple's lengthy new court document, the Epic Games Store hasn't been profitable since it launched in late 2018. Epic has reportedly sunken hundreds of millions of dollars into the storefront to secure publishing deals, payouts bonuses for developers, and timed exclusivity--not to mention the store's 88-12 revenue split that favors game developers.

The doc actually puts a total figure to the Epic Games Store's losses, which total up to about $593 million by the end of this year. The company spent many millions more on content deals than the storefront actually made; Storefront losses were $181 million in 2019, $273 million in 2020, and projections say losses will hit $139 million in 2021, the report states.

This is actually going according to plan. Epic understands the EGS isn't profitable yet, and isn't fazed by the red numbers. Epic has planned not to recoup specific costs sunken into EGS, namely the big exclusivity deals, which may have cost up to $330 million. If the numbers are accurate, Epic will have spent 55% of the storefront's total loss values on exclusivity deals, upfront payments and bonuses to developers, and publishing deals. 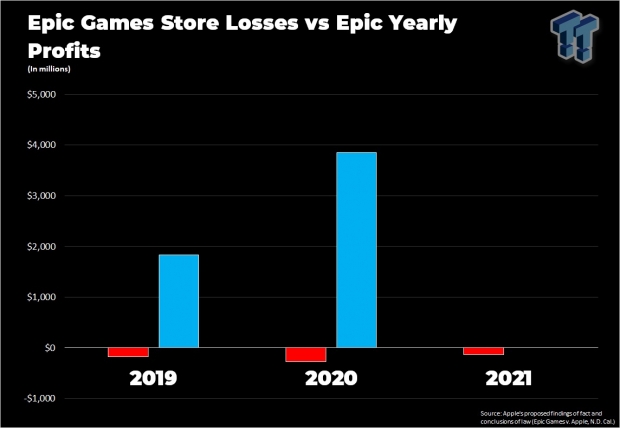 The company expects the store to be profitable by 2023, but Apple says this number is closer to 2027, "if it becomes profitable at all."

According to the EGS' recently published 2020's year-in-review stats, third-party game sales only made 37% of yearly revenues. This is about $265 million out of the $700 million in total generated on the store throughout 2020.

Apple also inadvertently reveals how much Epic spent in 2020; based on gross profit figures and profit margins, Epic spent roughly $5.7 billion on total costs throughout 2020. A quick bit of calculation shows that 2020's Epic Games Store losses accounted for nearly 5% of its total-year spending.

Here are multiple claims made by Apple in the court document:

Epic Games Store is unprofitable and not comparable to the App Store.

As noted above, EGS is not profitable and will not be profitable for at least multiple years, if ever.

Indeed, Epic committed $444 million in minimum guarantees for 2020 alone, while projecting, even with "significant[]" growth, only $401 million in revenue for that year, Epic acknowledges that trend will continue in the immediate future: Epic projects to lose around $139 million in 2021.

As Epic has acknowledged, the incentives and investments it has made in an attempt to grow EGS will result in "unrecouped costs."

That includes at least $330 million in unrecouped costs from minimum guarantees alone. At best, Epic does not expect EGS to have accumulative gross profit before 2027.

As a result, Epic has funded, and must continue to fund, EGS through funding and capital raised by other parts of its business, which have been "incredibly profitable "for "several years."