Ubisoft is giving away a bunch of free gear to all Assassin's Creed Valhalla owners, including a cosmetic Altair armor set. 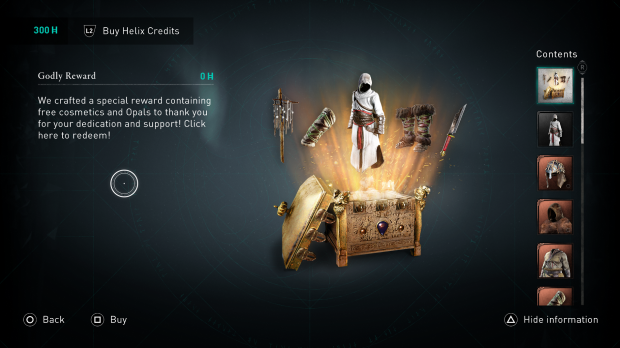 As a thank you to all Valhalla buyers, Ubisoft has a new freebie pack on the Animus Store, The so-called "Godly Reward" isn't as good as the amazing Carolingian set included with Amazon Prime, but it does let Eivor dress up as Altair from the first Assassin's Creed.

As far as actual gear goes, the Godly Reward unlocks the full Yule seasonal set that includes the Modraniht armor, dagger, and shield. The stats and quality of the set will vary based on your current gear rating, so don't redeem the offer until you level up and boost your current equipment.

As a huge thank you to our entire community for playing, discussing, and helping us to improve Assassin's Creed Valhalla, we have a special gift for you - the Godly Reward! Create new memories that hearken back to the original Assassin's Creed with Altair's Outfit for Eivor. The Yule Gear Set and cosmetics are also yours as a courtesy along with 300 opals. Head to the Animus Store to claim your free gift!