Activision shares closed at $90.96 on December 24, setting a new all-time record high for the company's stock. 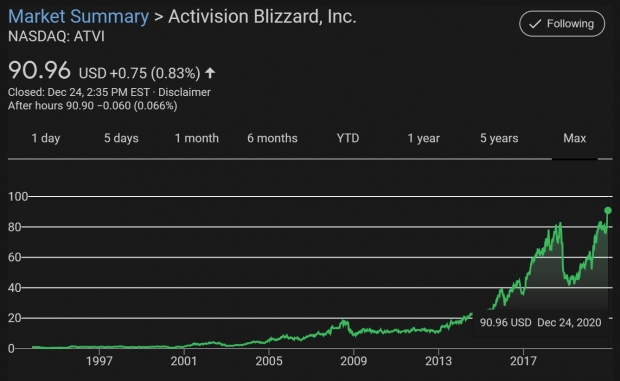 Activision stock is now higher than it has ever been in the company's 26-year history. The share spike was driven by Activision-Blizzard's successful releases including World of Warcraft Shadowlands, which is now the fastest-selling PC game of all time with 3.7 million copies moved in 1 day, and Call of Duty Black Ops Cold War.

Call of Duty hit an incredible milestone in 2020 by generating $3 billion in revenues as of December. The franchise has now made up nearly 40% of Activision's total trailing 12-month earnings. The new inter-connected ecosystem combines Warzone, Black Ops Cold War, Modern Warfare, and Call of Duty Mobile with monetization and full game sale earnings in a cohesive, cross-progression system.

The record shares are a direct result of Activision's new four-part plan. This strategy puts engagement, monetization, and mobile ports alongside full premium releases, and folds its biggest franchises together in a webwork of cross-platform microtransactions and sales. We've seen Activision weave Call of Duty releases together with this plan, and other franchises will follow suit.

Here are a few other metrics from Activision's recent Q3 results: