Intel is back in the GPU headlines today with another leak for its Xe GPU architecture, with its Iris Xe Graphics spotted in the wild. 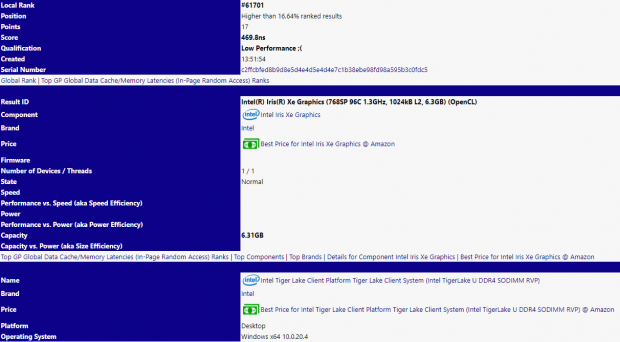 The new rumor has the Intel Iris Xe Graphics being bolted onto a future Tiger Lake-U family of processors, which will use Intel's upcoming Gen12 graphics. We're expecting twice the performance of the Gen11 graphics that were on Ice Lake with the upcoming Tiger Lake chips.

This particular rumor is about a device codenamed Iris Xe Graphics, which packs 96C Execution Units, which works out to 768 Shading Units. This particular variant was attached to 6.3GB of memory, so don't expect a Big Navi or Ampere killer just yet -- but more so low-power, ultra-thin laptops.

It was just over two weeks ago that Intel GPU boss Raja Koduri gave us a sneak peek inside of the Intel Folsom labs in the US. More on that and the delicious photos of early Xe silicon here.