Crytek pulled a really dog move today, with the developer pulling the Crysis Remastered gameplay reveal literally in the last hour -- and then announcing it had delayed the entire game and its launch, too. The leaked images seem to be getting at least some of the blame, you can see those crappy screenshots of Crysis Remastered here.

The above tweet is from the official Crysis Twitter account, which reads: "As you know, Crysis Remastered will be coming into the world this year -- and at the same time the Crysis IP will debut on Nintendo Switch!" It sounds so upbeat, ending that first sentence with an exclamation mark, but it's all disappointment and sadness from here on in.

Crytek continues: "Your passion for the Crysis franchise deserves an undeniably high-quality game, and we are ccommitted to delivering just that. To ensure that we meet that commitment, we will need to delay the launch date (all platforms) and trailer premiere by a few weeks. Because they already started, pre-orders for Switch will stay open, but pre-orders for all other platforms will be delayed as well".

"The features you're looking forward to are already set, but we want to take the time on polishing the game. You might be aware of the leak yesterday, and we want you to know: we've seen all the reactions - the good and the bad - and we're listening! We're still working on a number of things in game, as well as the storefront. Please keep the love coming, and rest assure, you'll have the game you love shortly!"

"This extra time until release will allow us to get Crysis Remastered up to the PC- and console-breaking standard you've come to expect from Crysis games. We hope you understand what we're up to - and that you stay with us while we take the time to make a few more improvements. Stay tuned, and we'll have that game, in your hands as soon as we possible can".

"We'll keep you updated on our progress, so please hang in there, and check back here for updates".

My take: Crysis saw the reaction to the "leak" and pulled the game, obviously it wasn't anywhere near ready -- and something far bigger happened behind the scenes. I don't know why you'd throw up the Crysis Remastered gameplay reveal on YouTube and then within the hour of it premiering you pull the entire event and delay a game that -- until yesterday -- was ready to go.

Maybe this is just a gigantic hype train, with Crysis wanting to burst onto the scene with something incredible. Now we're all talking about Crysis again, and even with the delay they know it'll be popular. But dealing with their fans like this? I'm not feeling this move if it's some hype-generating tactic.

If the game needs more time, then maybe they shouldn't be having premiere events and store listings, and especially clamp down on those leaks. Then in the last minute, pull the entire thing. 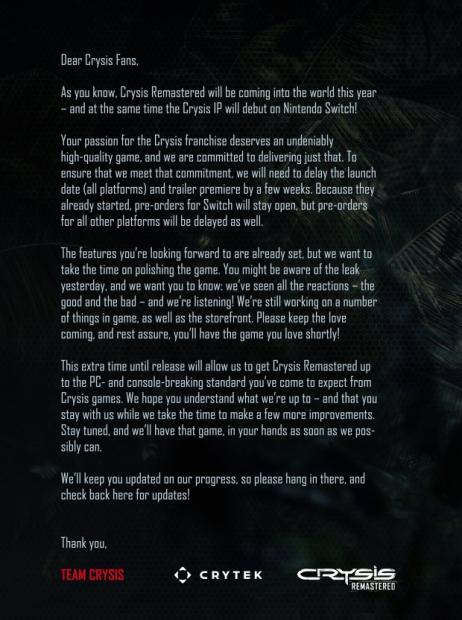