ASRock has just unveiled an absolute beast of a motherboard in its flagship Z490 AQUA, with the company making just 999 units of this motherboard which means most people will want to keep it in the box -- right?!

As for the board, ASRock is putting its all into the Z490 AQUA motherboard. First off we have the latest 16-phase 90A Dr.MOS and 2oz Copper PCBs which have up to 95% VRM efficiency. Why the huge beefcake VRM? Intel's new 10th Gen Core processors (check out the review kit here) and especially the flagship Core i9-10900K processor which is a 10C/20T chip at up to 5.3GHz -- and 5.4GHz in early overclocks.

ASRock is using a high-end water cooling system on its Z490 AQUA motherboard, something that will better handle the huge heat from the CPU and VRMs. It also features an OLED display that ASRock uses to display CPU voltages, temperatures, system and POST statuses, and much more.

ASRock will be supporting up to 128GB of DDR4 on the Z490 AQUA motherboard, with support for DDR4-4700 memory. ASRock includes an accessories bundles kit with the motherboard, providing 6 x knurled silver straight fittings, 4 x 90° right-angled fittings, with a filling and drawing value, and two stop-cap fittings. 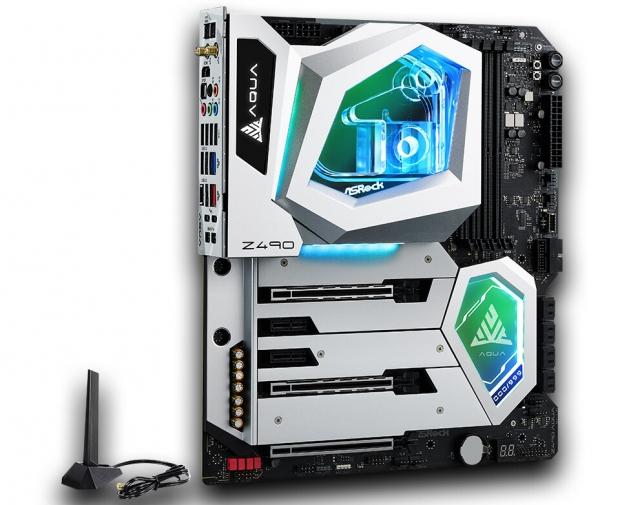 Thanks to its new Z490 chipset, the ASRock Z490 AQUA motherboard will have support for Intel's new Rocket Lake CPUs that launch on May 20 -- as well as bringing Intel up to parity with AMD by delivering PCIe 4.0 support on Z490.

You'll get oodles of connectivity iwth the ASRock Z490 AQUA with the rear I/O shield packing: