NVIDIA has just trolled AMD by dropping the price of its GeForce RTX 2060 to $299, after its introduction at CES 2019 and its starting price of $349. I've also got some rumored specs on NVIDIA's new GeForce RTX 3080 and GeForce RTX 3070 graphics card here.

But, the GeForce RTX 2060 is much faster than the GeForce GTX 1660 SUPER -- offering 20% more performance, as well as kick-ass features like RTX, DLSS, and others. If you haven't upgraded your graphics card yet, it looks like now has never been a better time for the sub $300 graphics card market. 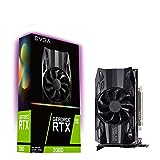