The new Radeon Pro W5700 packs 36 compute units which translates into 2304 stream processors and 64 ROPs, meaning it's not the full Navi 10 chip used on the flagship Radeon RX 5700 gaming card. We do have the Navi 10 GPU clocked at up to 1930MHz, resulting in total compute power of 8.89 TFLOPs.

AMD has chosen to use 8GB of GDDR6 on the same 256-bit memory bus as the Radeon RX 5700 XT, with the GDDR6 clocked at 14Gbps we have memory bandwidth of up to 448GB/sec. The one thing lacking from the new Navi-based Radeon Pro W5700 workstation graphics card is the use of ECC memory, something that the Vega-based Radeon Pro cards did offer. 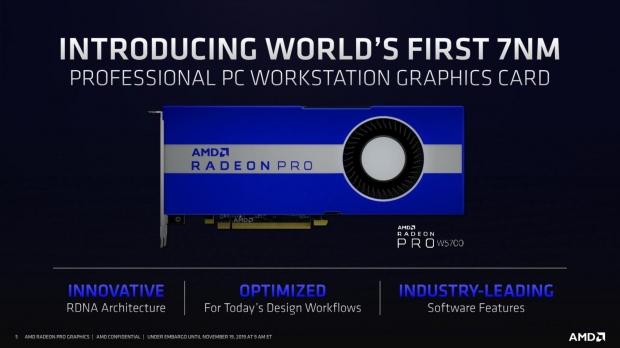 Although, we do have a 205W TDP -- much better than the previous Vega offerings, as well as a USB Type-C connector which uses up to 15W. AMD requires an 8+6-pin PCIe power configuration on the Radeon Pro W5700 graphics card. Just like all of the Navi graphics cards so far, AMD's new Radeon Pro W5700 uses the PCIe 4.0 connector meaning there's more bandwidth at play for workstation users to take advantage of. 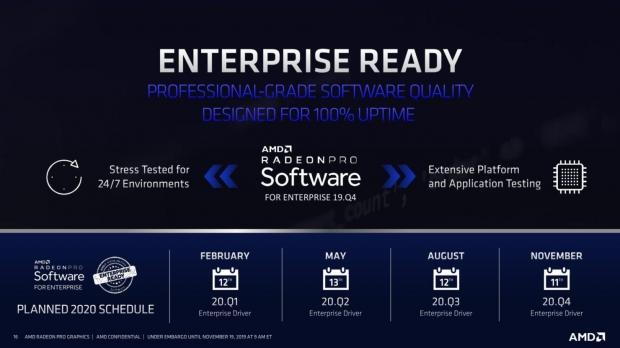 Now... performance wise AMD is touting 41% more performance-per-watt over GCN-based cards, with the new Radeon Pro W5700 compared against the Radeon Pro WX 8200 (Vega-based 230W TDP with HBM and 11 TFLOPs). Not bad at all.