Google's new Stadia game streaming service will only have 12 games at launch, including blockbusters like Assassin's Creed: Odyssey and Red Dead Redemption II. 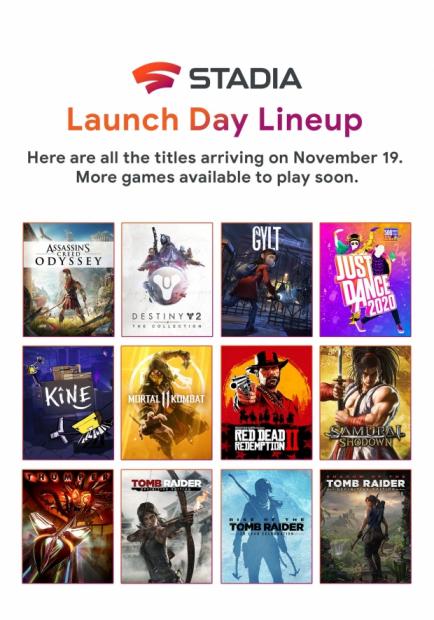 Stadia will be available November 19 and comes with a dozen titles upon release, Google today confirmed. 14 more games are slated to launch throughout the end of 2019. Remember that only the paid $10 a month Stadia Pro subscription is available at launch, so Destiny 2 will be free for everyone who pays for the service. The free Stadia version is coming sometime in 2020.

If you want to play Stadia on your TV, you'll need a Chromecast Ultra. Stadia Pro subscribers can also play games on desktop or laptops via a Chrome browser, and use native keyboard and mouse controls or a USB game controller like a PS4 or Xbox One controller to play. Game streaming to mobile phones will be extremely awkward and isn't advised.

"We're launching Stadia with 12 carefully-chosen games on day one, and an additional 14 will be available by the end of the year. There's something for everyone here: a library of superb, critically-acclaimed titles spanning multiple genres and age ratings. Below you'll see the full list of games available on November 19th, as well as games that will become available later in November and December."

The following games will be added to Stadia in the remainder of 2019, but Google says the timing of some titles isn't guaranteed: