I recently reported on the rumor that Intel's new flagship HEDT CPU, the i9-10980XE, was getting walloped by the mainstream AMD Ryzen 9 3950X which is yet to be released. 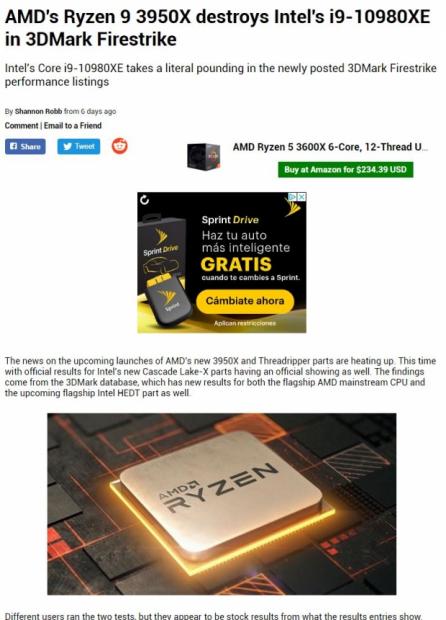 Well, the story has gotten a lot more grim for the i9-10980XE. A recent review from Lab501 shows that the Skylake derivative (again) that is the silicon for the i9-10980XE is showing its age. The much more spry or agile 7nm Ryzen third-gen is now effectively curb-stomping the new Intel flagship. The worst part about all of this is that the third-gen Zen 2-powered CPUs, which are dominating the new flagship, are the mainstream parts. These are what should be the equivalent of the Core i7 & i9 Z390 parts.

We have yet to see the expected or real-world performance from the third-gen Threadripper parts, but if it holds a candle to the 3900X and the reported 3950X parts with the inclusion of high-speed memory and quad-channel memory, it could be a monster. But I digress, let's get back to what the data at hand shows. 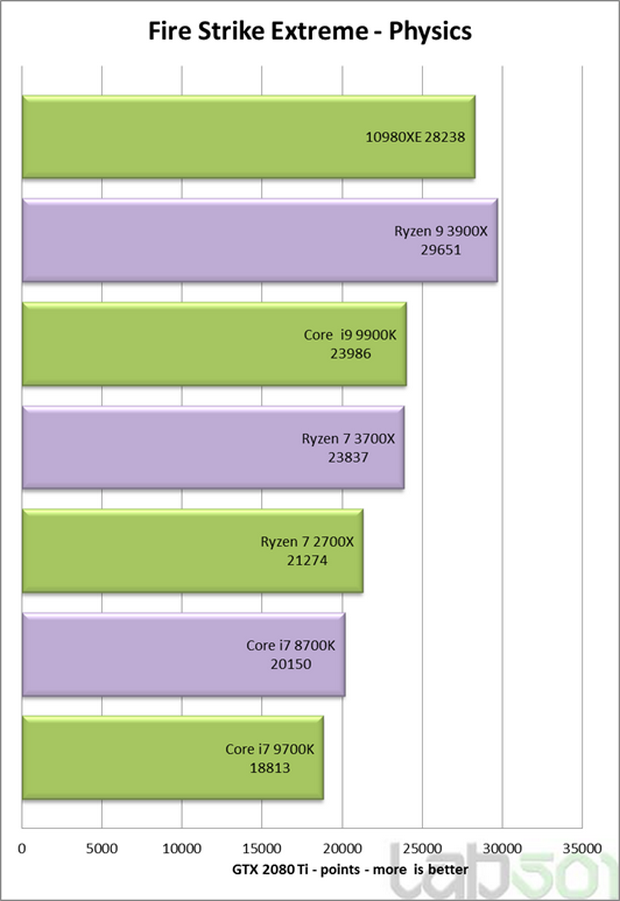 Our initial reporting was for standard Firestrike, So, luckily, Lab501 runs everything on similar hardware and settings to ensure a level playing field. Here we have the Firestrike Extreme preset, which we are looking at strict physics, which is a CPU test measurement. Do note that all testing used the exact same hardware except, of course, for the motherboard. We see that the 3950X is not shown here, which is okay since this CPU is still not released yet, and embargo for reviews is still upcoming. 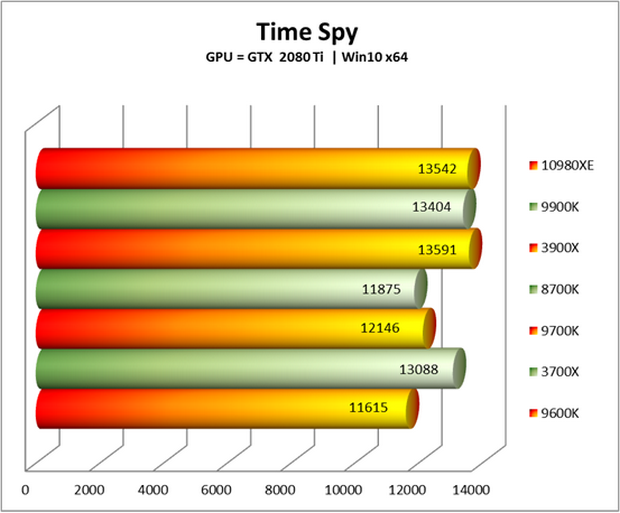 Time Spy shows an overall score of 13542 for the 10980XE, while 3900X accomplishes a score of 13591. This chip is sans 6-cores/12-threads when compared to the i9-10980XE. This means that we can only expect a more substantial disparity for the 10980XE when the 3950X finally is able to be shown in a review soon. Now, let's say some of you are still holding out and want to combat gaming tests as unreliable or 'not the target' for these CPUs, let's go ahead and look at some productivity tasks. 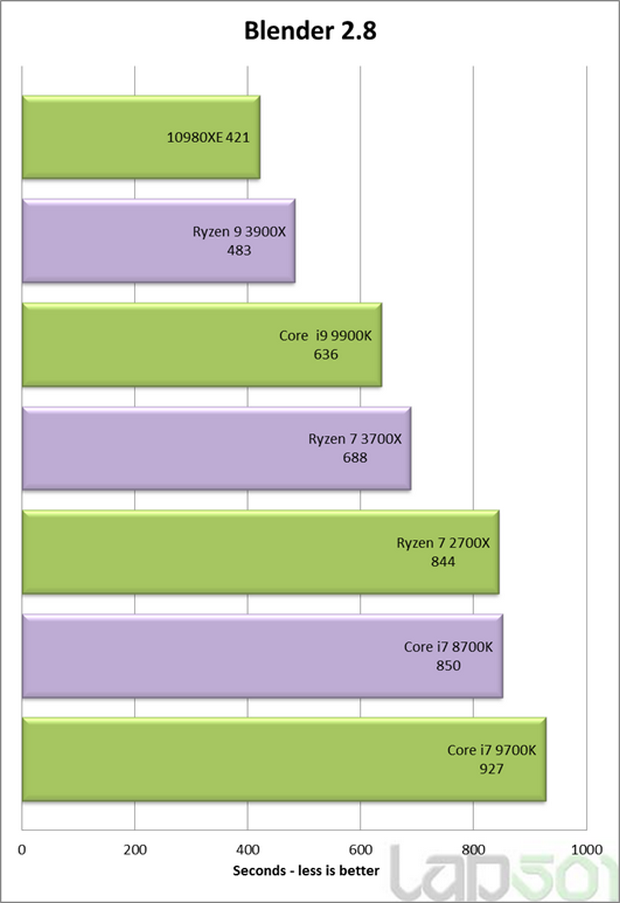 Now we have Blender, and finally, the 10980XE can use the extra 12-threads to beat the 3900X by 13%. Now we're going to do some creative math here, and this is not going to be 100% representative of relative performance, but should give some rough idea of expected performance. Now let's take the 33% of the 3900X, which would be added by the addition of 6-cores/12-threads to match the i9-10980XE, and we see that with our math shows. 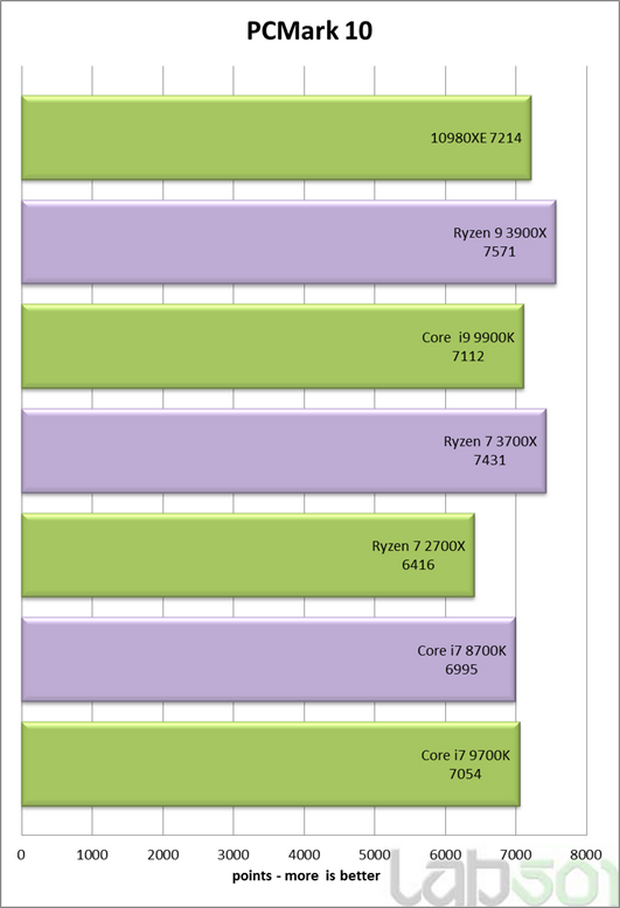 While we could go on for the multitude of tests, let's grab PCMark as the last one for this run. As we can easily see, the score for PCMark shows the 12-core once again marching the i9-10980Xe to the gallows, which is an awful sign for the slightly under $1000 CPU. As you can see in this instance, the entire Intel offering, including the 9900K and 8700K, is crushed, destroyed, rekt, or (choose your applicable noun).

Please be sure to check out Lab501's full review of the 10980XE and if you apply the math to scale the performance of the 3900X, you will see that the 3950X is on track to beat the flagship i9 in virtually every test except memory bandwidth. This is, of course, thanks to quad-channel memory, which makes us just that much more excited for the new third-generation Threadripper platform and the literal ripping it could do to Intel's market share.