Today's Outbreak Day, and Naughty Dog celebrates by discussing tons of info on The Last of Us Part II. 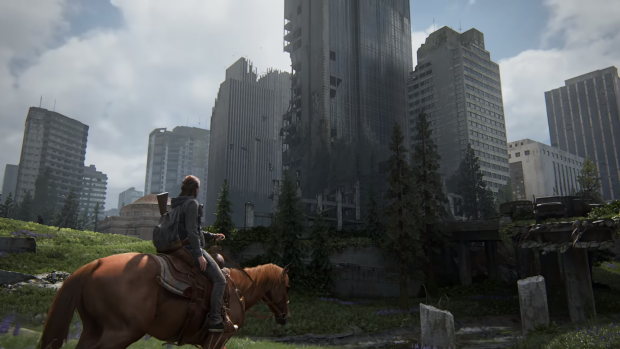 The Last of Us Part II is Naughty Dog's most ambitious game, and coming from the team that made Uncharted 4, that's saying a lot. The sequel will be the largest title the studio has ever made (it'll span two Blu-ray discs on PS4) and makes some big changes to core gameplay, including going 100% singleplayer. "It's definitely the most ambitious in scope game that we've ever made," said co-game director Anthony Newman.

Simple things like traversal have been amped up with more emphasis on verticality, climbing, and the overall action-adventure exploration avenues set forth by Uncharted. Ellie is more agile, fluid, and stealthy in the sequel: she can jump, climb, long jump across wide spaces, dodge-roll, go prone in high grass, and stealthily sneak. Naughty Dog also added a nifty "squeeze through" feature that lets you slide through tight spaces.

"We wanted across the board to make the enemies more threatening, to raise the tension that we started establishing in the first game. Even the lowest class of infected, the runners, are more dangerous," Neil Druckmann said.

There's a new enemy faction, possibly the same one we saw in the original teaser--the one that lynched the buff lady and "clipped" the other girl's wings. They're called the WLF, and they're "kind of like a militia that's taken over Seattle and have a very zero-tolerance policy on trespassers," Newman said.

When it comes to stealth, The Last of Us Part II adds a new dimension to sneaking difficulty.

Before it was all about staying unseen and unheard. Now that guard dogs can smell you and track your scent, you have to pay even more attention to enemies. Ellie can trigger a new visualization type in Listen Mode that shows your scent trail. Gamers can throw off a scent by going through water or specific areas, and can distract dogs with bottles and the like.

The game also introduces a new enemy class called the shambler. It's basically a walking poison bomb that takes a ton of hits before it dies, making it one of the most annoying-sounding enemies so far (except for the dogs, those are the most annoying for sure).

Enemy AI has been significantly overhauled and they'll be harder to trick this time around. Enemies communicate in more tight-knit groups, they aim better, and they're more impervious. This all adds a sheer layer of tension to the experience, making every encounter feel deadly.

"So much of this game is a conversation about psycho violence, and how do we make violence feel impactful to the player," Druckmann said.

There's a lot more in the trailer, so be sure to check it out.