ASRock has just unleashed its next generation X570 based motherboards that are ready for AMD's new Ryzen 3000 series CPUs and the unleashing of a totally next generation PCIe 4.0 connectivity.

We have new X570 motherboards from ASRock in their famous Taichi and Phantom Gaming families, with some boards rolling out with a huge full-coverage aluminum heat sink that keeps those next-gen PCIe 4.0 NVMe SSDs cool. Considering PCIe 4.0-capable NVMe SSDs can do up to 5GB/sec, you're going to need to keep those things cool.

It wouldn't be a new ASRock motherboard without some awesome RGB effects, so ASRock has included a bunch of RGBs and 3-pin addressable RGB headers joined by traditional 4-pin RGB LED headers that let you plug up other RGB lighting to your ASRock X570 motherboard.

These new ASRock X570 boards will launch alongside Ryzen 3000 series CPUs on 7/7. 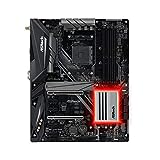