The release of Mortal Kombat 11 is only a few hours away and as fighting game fans build that hype Capcom have decided to try and take a slice of NetherRealm Studios' pie. 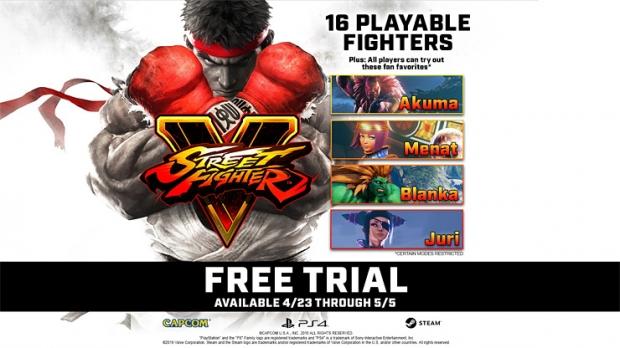 As I reported last week, Capcom announced that Street Fight V would be going completely free of charge for a limited amount of time on PlayStation and PC. The free trial period is scheduled to begin on April 23 and will last two weeks until May 5th. What will be included within the trial has been listed on the official Capcom blog, a link to that can be found here.

This might seem like a bit of cheeky move by Capcom but that is just what these companies do to grab audience, its classic marketing tactics for their products. It is unclear if the tactic will actually have a drastic effect on Mortal Kombat 11 sales, but I would assume that it certainly wouldn't be helping them. Mortal Kombat 11 recently had gameplay released for the Nintendo Switch, check that out here. There is also the Shao Kahn gameplay trailer if you want to see some bloody action mixed with "you suck" taunts.

Here is what will be featured in the Street Fighter V:

DLC Characters Unlocked - All 16 original characters included with the game are playable in the free trial, including classics like Ryu, Ken, Chun-Li, M. Bison and more! As a bonus, four fan-favorite DLC characters will be available for free during this trial: Akuma, Blanka, Juri and Menat! These four characters will only be available in Ranked, Casual, Battle Lounge, Training, and Challenges.

For those of you who already own Street Fighter V and Street Fighter V: Arcade Edition but have not yet acquired Akuma, Blanka, Juri or Menat, these four characters will be unlocked to you during the free trial period as well. If you decide to purchase any of these characters during the trial, you keep any progress made with each character.

If you have friends or family who have always wanted to try Street Fighter V, let them know this is their chance!