Nintendo has come out with a lengthy video that finally details everything Super Smash Bros. Ultimate fans have been waiting for - the contents of the coming version 3.0.0 update and the moveset for the first DLC fighter 'Joker'.

Nintendo has released a lengthy 15 minute video onto their official YouTube Channel that details what players can expect from the coming version 3.0.0 update. According to the video, Super Smash Bros. Ultimate will be updated to version 3.0.0 on April 17th, and included within that update is many things I have reported on previously. Firstly, we have the DLC fighter 'Joker' and his stage Mementos which was data minded back in February.

Next is new game modes such as Stage Builder, which just happened to be leaked last week on an official Nintendo advertisement. There is also the Shared Content option which will allow players to share their created stages and gameplay videos with other players from around the globe. Nintendo will also be adding the Smash World service which is available on the Nintendo Switch Online app, the new service will players to view stages and gameplay videos without starting the game. Nintendo will be rolling out version 3.0.0 on April 17th, for more information watch the entire above video above. 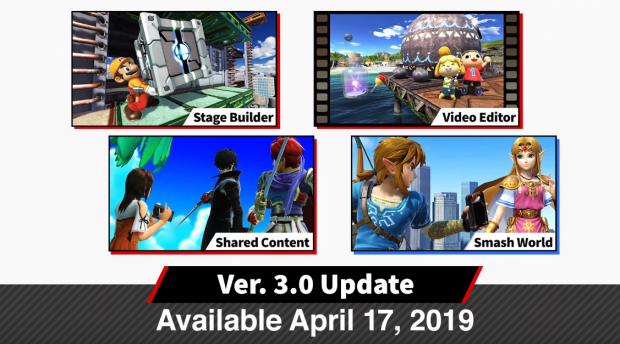