Twitch is including some nifty Nintendo loot with its new monthly freebie drop. 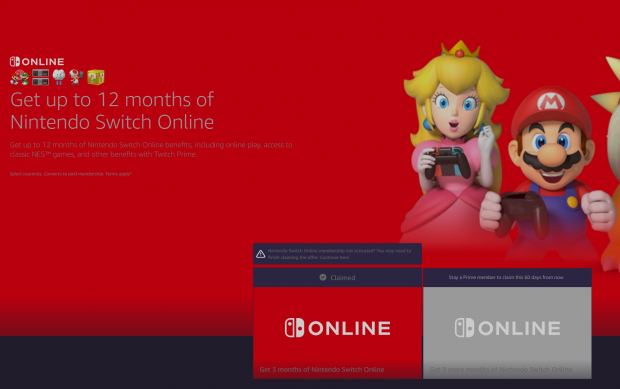 With a new promo, Amazon Prime members can snag up to 12 months of Nintendo's premium Switch Online service for free. But unlike Twitch Prime's other free drops, this one doesn't unlock all at once. The promo starts by giving everyone 3 months of Switch Online for free, and then the remaining 9 months can be manually unlocked if you stay a Prime member for the next 60 days.

First you'll have to link your Twitch Prime and Nintendo Accounts together, and then put a credit card or PayPal payment method down for recurring billing.

Auto-renewal is turned on by default--this is the whole idea behind the promo, of course--so be sure to turn it off either from your Switch's account settings page, or on Nintendo's website under the Account-> Subscriptions tab.

Nintendo's Switch Online service normally costs $20 a year or $7.99 for three months, and grants access to online multiplayer in key games like Splatoon 2 and unlocks a trove of classic NES games. The current selection of NES games is quite favorable and remains the real selling point of the subscription--they come with old-school ROMs as well as save states and visual modes, too.

Nintendo adds 3 new NES games to the service every month, and this month's games include titles like Star Tropics and Kid Icarus.