GDDR6 will be the successor to GDDR5, which already rips up the memory bandwidth game, even in the face of HBM2. But now news has us excited, teasing that Samsung had expected 14Gbps of bandwidth from GDDR6 but will instead reach 16Gbps. 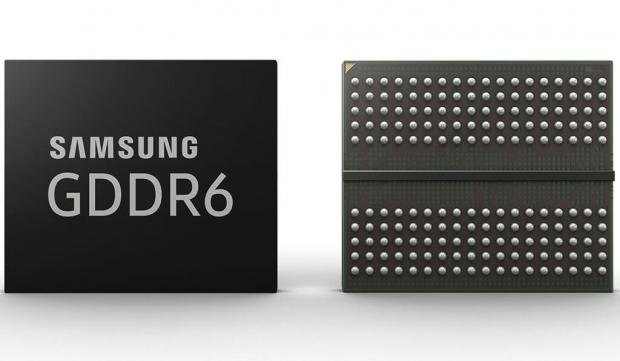 Samsung announced the news as part of their 36 products that have been recognized as Innovation Awards, ahead of CES 2018 in January. Samsung's new 16Gb GDDR6 memory is joined by their Galaxy smartphones and new 8TB NGSFF NVMe SSD.

As for GDDR6, Samsung teases: "It processes images and video at 16Gbps with 64GB/s data I/O bandwidth, which is equivalent to transferring approximately 12 full-HD DVDs (5GB equivalent) per second". Yeah, you got that right - it can handle 64GB/sec of bandwidth, enough for future 4K/8K gaming.

We should expect NVIDIA's upcoming GPU release to feature GDDR6, which could come in the form of a new Volta-based TITAN graphics card, or a new Ampere-based GeForce graphics card. GDDR6 on a 256-bit memory bus will pack a 512GB/sec of memory bandwidth, while GDDR6 on a 384-bit memory bus could take things to the next level with a mind-blowing 768GB/sec of memory bandwidth.

In comparison, AMD has just 483GB/sec of memory bandwidth on their flagship Radeon RX Vega 64 graphics card, even with its fan-dangled HBM2 technology. NVIDIA still takes the cake with memory bandwidth, with their Volta-based Tesla V100 accelerator pumping away with 901GB/sec courtesy of HBM2 and a huge 4096-bit memory bus.