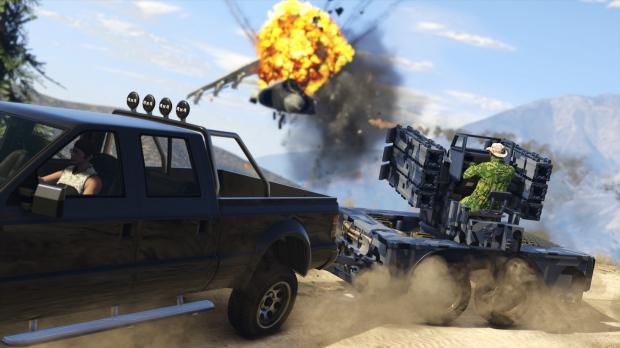 In its fiscal Q3'18 earnings report, Take-Two Interactive announces that Grand Theft Auto Online has just enjoyed its biggest quarter yet. The massively lucrative online mode broke two records in the three-month period ended June 30: most earnings in a single quarter, and most monthly active users (MAUs), both of which were driven by massive engagement from new content updates like the Gunrunning DLC.

GTA Online contributed to Take-Two's quarterly performance across the board, from the $418.2 million in net revenues (up 34% YoY) earned during the period to the $348.3 million in net sales (up 28% YoY) gleaned in fiscal Q1'18. Bear in mind the company earned these revenues without releasing a new game, and 94% of earnings were from catalog titles. Take-Two Interactive CEO Strauss Zelnick confirms GTA Online was the single most largest contributor to the $171.468 million earned from recurring consumer spending during the period, which was boosted by a massive 71% year-over-year.

"On the heels of the substantial new Gunrunning update, June and July became our two biggest months ever for GTA Online monthly active users. Rockster Games will cotninue to support the game going forward." 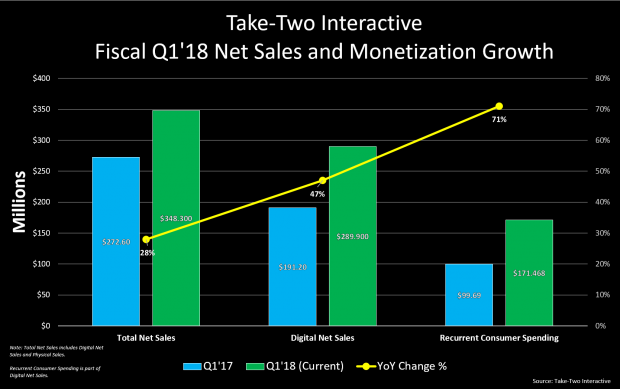 GTA Online is also one of the company's biggest drivers for digital supremacy, followed by annual sports releases like NBA 2K17 and WWE 17. Thanks to earnings from microtransactions, DLC, add-ons, and full game downloads, the company's digital earnings tower above physical revenue. Digital accounted for 64% of total net revenues during the quarter, or $268.235 million, whereas physical accounted for 36% with $149.981 million.

The company's lucrative properties are also making most of their money on consoles. Consoles pulled in 82% of net revenues in the fiscal Q1'18 period, continuing a consecutive six-year quarterly streak.

"As a result of Grand Theft Auto Online's performance in the first quarter we now expect the game to deliver net sales growth during fiscal 2018 and another consecutive year of record results," Mr. Zelnick affirmed during the call.

Rockstar Games will continue supporting GTA Online with free content updates well into the current and next fiscal years.