The wait is nearly over with SEGA unveiling the next chapter in the Sonic Boom universe; Sonic Boom: Fire & Ice exclusively for the Nintendo 3DS. The new game is set to be released for single and multiplayer on September 27, with Sonic and his friends out to save the world. The infamous Dr. Eggman has discovered the supercharged element ragnium on the mythical Island of Ragna Rock, and whilst mining it has created a new project that's causing problems in this unexpected turn of events, Sonic and his friends might have to save Dr. Eggman from his own creation.

Choose your favourite character and race through this brilliant new adventure as Sonic, Tails, Amy, Knuckles or Sticks to stop the dreaded Dr. Eggman and an all new creation making their debut, D-Fekt. The game lets you wilde the power of fire and ice to burn through obstacles, puzzles, and freeze enemies in their tracks. Embrace classic character abilities such as Sonic's speed, Tails' flight, Knuckles' strength, Sticks' Boomerang and Amy's hammer to explore, fight and race through an undiscovered land like never seen before.

Compete with your friends in 2-player bot racing and unlock 6 new tracks as you collect artifacts along your way throughout this new world. Sonic Boom: Fire & Ice boss battles are so big they take up both screens, not forgetting to play mini-games filled with puzzles and time trials including an updated Sea Fox.

Who would have thought that the saving the villain from his own villain would be the unexpected twist on the hedgehog priority list! 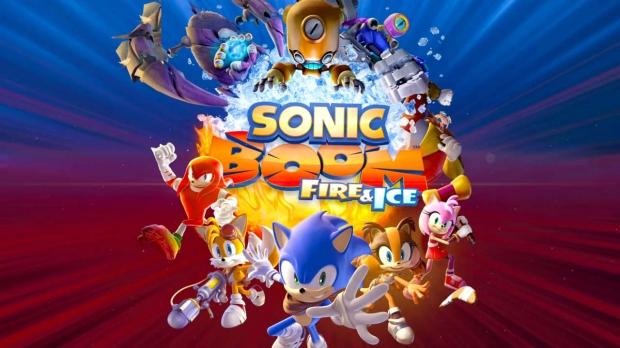