Activision has officially trademarked Call of Duty: Infinite Warfare, pretty much confirming the next entry in the hit FPS franchise. 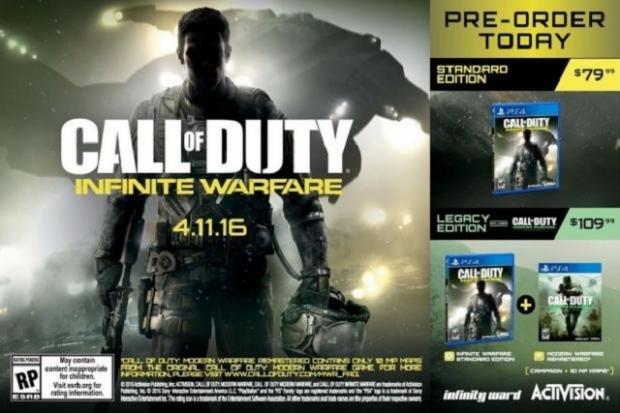 Call of Duty: Infinite Warfare was originally outed by an accidental listing on the PlayStation Store, along with leaked pre-order adverts and in-store promos. The game is believed to take place in space, and may be set in the distant future. A special $80 Infinite Warfare Legacy Collection comes with a free copy of Call of Duty 4: Modern Warfare Remastered, which features the full campaign and 10 multiplayer maps.

Two new augmented reality Twitter networks for Infinite Warfare have been spotted, and may represent the protagonist and antagonist forces; the Infinity Initiative and the Opposing Force. Both feeds follow the official Call of Duty Twitter, along with every CoD developer, and have close ties within the universe.

Call of Duty: Infinite Warfare has been listed for a November 4, 2016 release date.

Activision may reveal Call of Duty: Infinite Warfare at E3 2016, but at this point I think they should just spill the beans already.