Guillermo del Toro recently reunited with Hideo Kojima to hold a "creative visions" talk at DICE 2016. During the talk, the famed director had some pretty strong words about the current state of the gaming industry, loosely hinting at the reasons why Silent Hills was cancelled.

The director says that games, like movies, are involved in a restrictive and tense marriage between creativity and finances. As a result, certain games that take a risk are deemed "unsafe", and are ultimately cancelled--not unlike Silent Hills. "We all belong in industries that are a marriage of creativity and finances. In that way, both movies and games are very similarly restricted. It's a pity, but it's a marriage that happens to every big industry."

"The storytellers look ahead to see what they can discover, and the money people are always looking back. The investors are looking backward and thinking 'where are we going? this isn't the safe route'. So there's a natural tension. [Gaming's creativity] is only limited by the bastards with the money."

Del Toro is no stranger to the inner workings of the games industry. All of his gaming projects ultimately fell apart, which led to him to proclaim he's done making games for good and all.

At the show, Del Toro made an exception to his promise: when asked if he was done with games, he pointed at Kojima and said "Except with this man. I'll do whatever the fuck he wants." Maybe we'll get a P.T. spiritual successor after all?

The director rightly says that as more software becomes available, like Amazon's new free games engine, devs can make great games without needing huge budgets. Be sure to check the video above for the full talk. It's great to see the camaraderie between Kojima and Del Toro, especially without Konami's dark shadow casting over them. 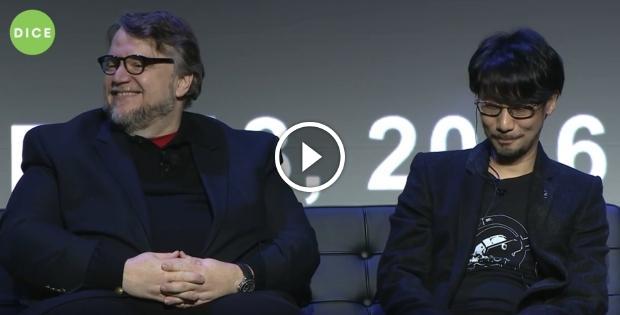