We knew that NVIDIA's Pascal architecture was going to deliver a massive update over the current Maxwell-based offerings in the GeForce GTX 980 Ti and Titan X, but the transistor count is going to be insane. Titan X features 8 billion transistors while Pascal will reportedly contain an insane 17 billion transistors. 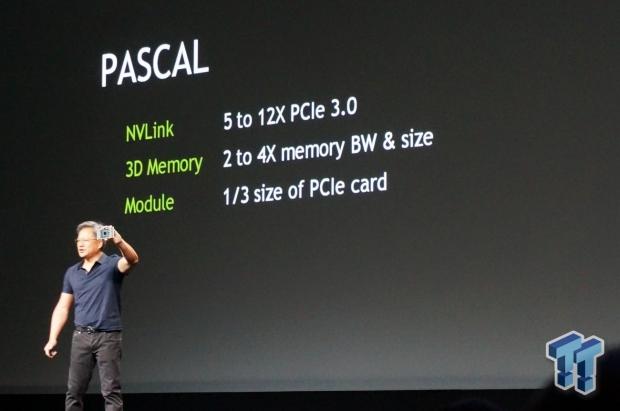 NVIDIA will be tapping TSMC's 16nm process for its Pascal architecture, as well as using HBM2, which should see a massive increase in horsepower. But even with 17 billion transistors, the Pascal-based GPU will be "significantly smaller" than the 28nm-based Maxwell GPUs, reports Fudzilla. NVIDIA will be making use of HBM2 on the next-gen video cards, offering up to 32GB of the next-gen VRAM technology on its highest end card.

Expect around 50% or more performance over the already fast GTX 980 Ti, which will see NVIDIA easily dominate AMD's Radeon R9 Fury X. But where does this leave AMD? Right now, AMD is in dire need of a huge architectural change, as Fiji didn't really bring anything new to the table. All AMD has done is used HBM1, but it's benefits weren't really shown on Fury X, apart from the card being smaller than usual. NVIDIA is really going to leapfrog AMD next year with its triple-punch in 16nm + Pascal + HBM2.